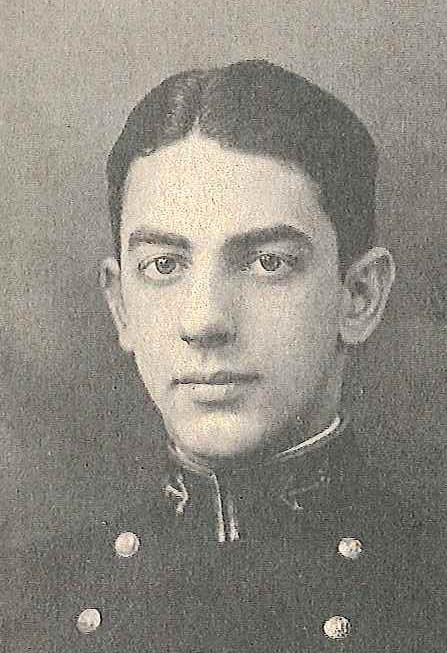 Charles Lorain Carpenter was born in Greensburg, Pennsylvania, on July 31, 1902, son of Charles C. and Jennie Adell (Wilson) Carpenter. He was graduated from Wilkinsburg High School, and attended the University of Pittsburgh for two years before his appointment to the US Naval Academy in 1922. As a Midshipman he was a member of the Cross Country and Varsity Track Teams. Graduated and commissioned Ensign on June 3, 1926, he subsequently attained the rank of Captain on August 30, 1944, to date from August 1, 1943.

After graduation, he remained at the Naval Academy for the summer course in Aviation, and in August 1926 joined USS Galveston. He was awarded the Navy Cross for “having distinguished himself by display of extraordinary heroism, coolness and excellent judgment in the performance of duty during an insurrection in Nicaragua. Ensign Carpenter was a member of the Leon Detachment of the Landing Force, and on 17 May 1927, while attempting to arrest and disarm an ex-rebel soldier, after having been twice fired on, and at the time being surrounded by a crowd who egged on his aggressor, he, in self defense shot and killed the soldier in question, thereby producing a most salutary effect upon the populace.

Detached from the Galveston in August 1928, he had duty aboard USS Wyoming, flagship of the Scouting Fleet, until December of that year. He had instruction at the Naval Torpedo Station, Newport, Rhode Island, during the six-months following, and in June 1929 joined USS Trenton, flagship of Light Cruiser Division 2, Scouting Fleet, in which he served until May 1933. In July of that year he reported to the Office of the Commandant, First Naval District, Boston, Massachusetts, where he had duty and instruction for two months.

Again ordered to sea, he served from September 1933 to February 1934 in USS DuPont and, after eighteen months’ duty in the Office of the Commandant, First Naval District, he had consecutive duty afloat until May 1939 in the USS Gold Star and the USS Tennessee. A year’s shore duty at the Navy Yard, Philadelphia, Pennsylvania, preceded his command of USS Doran (DD 185), from June to September 1940, and duty with Destroyer, Atlantic Squadron for two months thereafter.

In January 1941 he reported to Headquarters, Fourth Naval District, to assist in fitting out USS Washington, and had duty aboard that battleship from her commissioning in July 1941, until May 1942, during which period the United States entered World War II. In June 1942 he joined USS Helena for service in the Pacific until August 1943. In that cruiser, he participated in the capture and defense of Guadalcanal; and action at Cape Esperance (Second Savo), and at Guadalcanal (Third Savo).

He returned to the Naval Academy in September 1943, and after a year’s duty was ordered to the Naval Station, Astoria, Oregon, for fitting out duty with USS Freestone (APA 167), He commanded the Freestone from her commissioning in November 1944 throughout the latter period of the war and until November 1945; participating, as her Commanding Officer, in the assault and occupation of Okinawa Gunto from March 24 to June 30, 1945. Upon his return to the United States, he reported for temporary duty at Headquarters, Twelfth Naval District, San Francisco, California, where he was Naval Consultant and Liaison Officer between the Philippine Commonwealth and the US Navy.

From February to May 1946 he was Commanding Officer of USS Hocking (APA 121), and for six months thereafter commanded USS Burleson (APA 67), assigned to Joint Task Force One for Operation Crossroads, the atomic bomb tests at Bikini Atoll. During the period November 1946 to April 1947 he served on the staff of Commander Amphibious Force, Atlantic Fleet, and after a tour of duty in the Office of the Chief of Naval Operations, Washington, DC, he was assigned from November 1949 to March 1952 as a member of the US Naval Mission to Lima, Peru. From April 1952 to July 1953, he was Commander, Destroyer Squadron Eighteen, during which time he acted as Destroyer Type Commander of the Sixth Fleet on two different tours with that Fleet. At present, he is serving on the staff of the Commandant, Third Naval District, as Assistant Chief of Staff for Personnel.