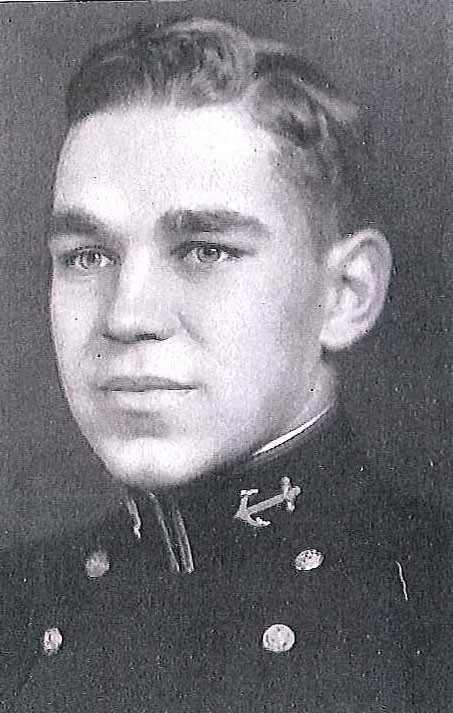 Raymond Berthrong was ton in Washington, DC, on October 9, 1915, son of Frederick M. and Elsie Weymouth (Edwards) Berthrong. He attended Western High School, Columbian Preparatory School, and George Washington University, all in Washington, prior to entering the US Naval Academy, Maryland, on June 8, 1934, on appointment from Illinois. He was graduated with the degree of Bachelor of Science and commissioned Ensign in the US Navy on June 2, 1938, and through subsequent advancement attained the rank of Captain, to date from June 1, 1957.

After graduation from the Naval Academy in June 1938, he had sea duty for two years on board USS Minneapolis, flagship of Cruiser Division 6, Scouting Fleet. He then had instruction at the Submarine School, New London, Connecticut, September to December 1940, and in January 1941 joined USS S-16 for duty. He remained on board during the early period of World War II, and in April 1943 reported to USS Angler, building at Groton, Connecticut. He served as Executive Officer of that submarine from her commissioning in October, until December 1943, when he was transferred to similar duty in USS Cuttlefish for one month.

From January to March 1944 he was attached to Submarine Division 43, and from March to October of that year was Executive Officer of USS Sea Raven (SS-196). He later commanded that submarine for three months, and was awarded the Silver Star Medal “For conspicuous gallantry and intrepidity as Commanding Officer of the USS Sea Raven, during the Seventh War Patrol of that vessel in enemy Japanese-controlled waters in the Pacific Ocean Area, from November 1 to December 25, 1944…” The citation further states:

“Despite rough seas, Lieutenant Commander Berthrong launched repeated strikes against enemy shipping and, by his expert shipbuilding, contributed materially to the success of the Sea Raven damaging more than 25,800 tons of enemy shipping and in evading severe hostile counter-measures. His devotion to duty reflects the highest credit upon himself, his officers and men and the United States Naval Service.”

For earlier action he received a Letter of Commendation, with Ribbon and Combat “V,” from the Commander in Chief, Pacific Fleet, as follows: “For meritorious conduct in action in the performance of his duties in a US Submarine during a War Patrol of that vessel. As Assistant Approach Officer, his excellent judgment and through knowledge of attack problems assisted his commanding officer considerably in conducting successful attacks which resulted in the sinking of an enemy freighter of 4,000 tons and the damaging of an escort vessel of 1,000 tons…”

In January 1945 he assumed command of USS Cero (SS-225), and commanded that submarine throughout the remaining war period and until March 1946. For outstanding service in that command he was awarded the Gold Star in lieu of the Second Silver Star Medal, and received a Letter of Commendation, with Star and Combat “V” for his Commendation Ribbon. Citations follow, in part:

Gold Star in lieu of Second Silver Star Medal: “For conspicuous gallantry and intrepidity as Commanding Officer of the USS Cero, in action against enemy Japanese forces during the Seventh War Patrol of that vessel in enemy controlled waters, March 31 to May 27, 1945. Despite shallow water and enemy anti-submarines, Lieutenant Commander Berthrong carried out an offensive close to enemy shores and, aggressively launching gun and torpedo attacks, succeeded in destroying two hostile naval vessels and several merchantmen and in damaging an additional naval unit. Skillfully evading severe enemy counter-measures, he brought his ship safe back to port…”

Letter of Commendation: “For meritorious conduct in action…as Commanding Officer of USS Cero during the Eighth War Patrol of that vessel in area south and east of Honshu from 27 June to 30 July 1945. Despite the hazardous waters of Tsugaru Strait, he diligently took his ship within 2,000 yards of the enemy shoreline to rescue three aviators. Shortly after this daring rescue, he bombarded the Shiriya Saki radio station and lighthouse, causing considerable damage. The Cero was subjected to a bombing attack from an enemy plane and extensive damage was caused throughout the ship. He skillfully evaded this and other enemy anti-submarine measures and brought his ship safely to port…”

Upon his return to the United States, he was ordered to New London, where he served from March 1946 until May 1947 at the US Navy Underwater Sound Laboratory, Fort Trumbull. During the two years to follow, he commanded USS Sirago (SS-485), and in April 1949 reported for a tour of duty in the Office of the Chief of Naval Operations, Navy Department, Washington, DC, as Head of the Submarine Material Readiness Section. This completed in July 1952, he had a month’s instruction at the Navy’s CEC Team Training Center in Boston, Massachusetts, then reported as Operations Officer of USS Newport News (CA-148).

Detached from the Newport News in April 1953, he assumed command of USS John R. Pierce (DD-753), remaining in command of that destroyer until November 1954. Another tour of duty in the Navy Department, this time assigned to the Bureau of Naval Personnel, followed, and on February 27, 1958, he was ordered detached for further duty afloat as Commander Destroyer Division 222.