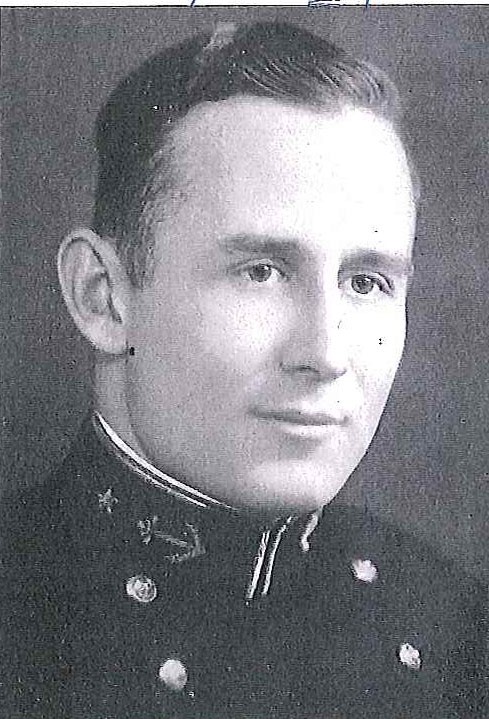 Louis Earle DeCamp was born in Los Angeles, California, on October 31, 1915, son of Ray and May D. (LeFevre) DeCamp, both now deceased. He attended Hollywood (California) High School and the University of California at Los Angeles, for one year, prior to entering the US Naval Academy, Annapolis, Maryland, on appointment from his native state in 1934. As a Midshipman he was Captain of the Gym Team and was Intercollegiate Champion Rope Climber. Graduated with distinction, twentieth in the Class of 1938, and commissioned Ensign on June 2, that year, he subsequently advanced in rank attaining that of Captain, to date from July 1, 1956.

Following graduation from the Naval Academy in 1938, he joined USS Ranger and in August 1939 transferred to USS Herbert, operating with the European Squadron. Detached from that destroyer in July 1940, he continued duty afloat in USS Kearny. In July 1941 he reported for flight training at the Naval Air Station, Pensacola, Florida, and in January 1942 was designated Naval Aviator.

He next served as Senior Aviator on board the battleship North Carolina and participated in the Guadalcanal and Solomons Campaign. Assigned in October 1943 to the Naval Auxiliary Air Station, Corry Field, Pensacola, Florida, he was Commanding Officer of Squadron VN608, with additional duty as Executive Officer of Corry Field for one year and later in command of that field. In April 1945 he reported for refresher training in PBM Mariner aircraft at the Naval Air Station, Banana River Florida, and in October of that year assumed command of Patrol Squadron NINETEEN, operating in the Eniwetok area, Central Pacific and later in the Atlantic.

From June 1946 until September 1947 he served as Executive Officer of USS Norton Sound (AV-11), which was flagship of the Commander of Operation NANOOK I (Arctic Expedition, 1946). Following instruction at the Armed Forces Staff College, Norfolk, Virginia, he was assigned in February 1948 to Aviation Detail in the Office of the Chief of Naval Operations, Navy Department, Washington, DC. Between September and December 1950 he was student at the All Weather Flight School, after which he had further training at the Antisubmarine Warfare School, Fleet Airborne Electronics Training Unit, Atlantic.

In January 1951 he assumed command of Patrol Squadron THREE and in December 1952 reported as Executive Officer of USS Wright (CVL-49). Detached from that aircraft in May 1954, he attended a seven weeks’ course in weapons employment under the cognizance of Commander Air Force, US Atlantic Fleet. He reported in July 1954 for instruction in Naval Warfare at the Naval War College, Newport Rhode Island and for his outstanding thesis written there he was especially commended.

In July 1935 he entered the Office of the Deputy Chief of Naval Operations for Personnel and in March 1956 became Head of the Personnel Programs Branch, Aviation Division, Navy Department, where he remained until May 1958. He next had duty as Assistant Chief of Staff for Operations and Plans to the Commander Carrier Division SIXTEEN. He became Chief of Staff to Commander Hunter Killer Force, Atlantic, Commander Antisubmarine Defense Group ALFA and Commander Carrier Division SIXTEEN in May 1959, and in July 1960 assumed command of USS Jupiter (AVS-8), based at Yokosuka, Japan. Detached in June 1961, he commanded USS Kearsarge (CVS-33) until July 1962, when he reported as Chief of Staff and Aide to the Commander Anti-Submarine Warfare Force, Atlantic Fleet.