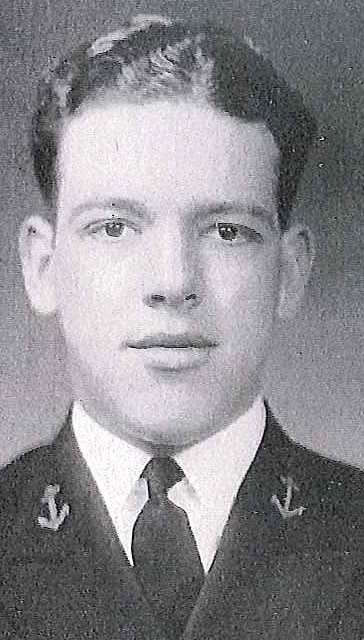 One of four sons of Brigadier General and Mrs. C.A. Badger to graduate from the Naval Academy, Rodney Jenkins Badger received his commission in 1935.  He joined the battleship Arizona and in 1937 was ordered to Asiatic Station.  There he served successively on board the destroyer Stewart and the gunboat Mindanao and was present during the fall of Shanghai and Canton to the Japanese.  He continued duty afloat in the oiler Platte and the cruiser Vincennes and was attached to the latter when the United States entered World War II.

The Vincennes had an illustrious war record, participating in troop movements to Iceland; patrol of the Arctic; two trips to South Africa for transshipment of gold; escort of the Hornet with General Doolittle’s flyers aboard for their B-25 raid on Japan; the invasion of Guadalcanal and the First Battle of Savo Island.  In the latter engagement the Vincennes was sunk.  Captain Badger was picked up by a destroyer after spending the night in the water, transferred to USS Barnett, then to the SS Roamer, which took him to Aukland, New Zealand, where he served on the staff of Commander Service Force, South Pacific and as Executive Officer of the Receiving Barracks there.

He continued duty in the Pacific, September 1942-September 1945, participating in the major war engagements, including Midway, Solomons, New Georgia, Luzon, Iwo Jima, Okinawa and the fall of Japan, while serving as Navigator of the store ship Talamanca:  Communications Officer on the staff of Commander Mine Squadron TWO; Flag Secretary and Senior Staff Officer to Commander Transport Division TWO; and First Lieutenant on board the newly-commissioned cruiser Astria.  After the War, he had duty as Head of the Miscellaneous Equipment Branch in the Bureau of Ships, Navy Department, and in March 1948, assumed command of the destroyer O’Hare.

Returning to the Navy Department in April 1950, he was assigned to the Bureau of Naval Personnel, where he had duty in the Training Division until March 1953.  He was Executive Officer of the cruiser Bremerton, operating in the Korean combat zone, in 1953 and 1954, and for the next year commanded Destroyer Division 152.  After instruction at the National War College, Washington, DC, June 1955-June 1956, he became Head of the Material Management Branch, office of the Chief of Naval Operations, Navy Department.  In January 1958, he was ordered to command the destroyer tender Frontier, and a year later transferred to command of Destroyer Squadron 3.  He returned to the Navy Department in January 1960 to serve first as Assistant Director for Captain Detail, and later as Director of the Officer Distribution Division.

Bronze Star Medal:  “For meritorious service as Executive Officer of the USS Bremerton during combat operations against enemy North Korean and Chinese Communists forces in the Korean theater from 1 May 1953 to 27 July 1953.  Throughout this period, Commander Badger demonstrated an aggressive confidence which demanded and attained a high standard of performance from his crew.  As Executive Officer, he supervised the organization of the ship and the training of its personnel and therefore was in a large measure responsible for the Bremerton in fulfilling its combat mission.  During this period, the Bremerton was engaged in bombardment of enemy targets on the east coast of Korea.  In each engagement with the enemy, he carried out his duties in a manner which was inspiring to his subordinates and thus contributed to the destruction by the Bremerton of many enemy shore batteries, Commander Badger demonstrated courage and exceptional ability in assisting the commanding officer and in directing effective counterbattery fire which silenced many enemy guns…”

Letter of Commendation (ComSoPac):  “For devotion to duty under adverse conditions while serving on board a cruiser which was badly damaged during the engagement of Japanese naval forces off Savo Island on August 9, 1942.  With only a few men to assist him, Lieutenant Badger extinguished fires in the vicinity of the 5” battery, placed life jackets on the wounded and lowered them over the side.  He placed his own life jacket on the executive officer, who had been severely wounded and was unable to move…”

Letter of Commendation (CinCPac):  “For excellent service…as First Lieutenant and Damage Control Officer of USS Astoria from May 17, 1944 to June 10, 1945, during operations against the enemy in the Mindoro, Luzon, Iwo Jima and Okinawa Campaigns.  His professional skill and devotion to duty contributed materially to the maintenance of his department in a high state of efficiency and to the ability of his ship to meet every scheduled operation.  He rendered valuable assistance to his commanding officer in several enemy air attacks and bombardment on enemy shore installations…”

Navy Unit Commendation (USS Hopkins):  “For outstanding heroism in action while attached to Mine Squadron TWO operating against enemy Japanese forces in support of the Solomon Islands Campaign from August 7, 1942 to June 4, 1944…”