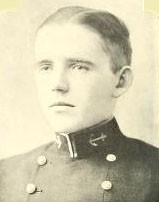 Clarence Emmet Coffin was born in September 5, 1906, in Indianapolis, Indiana, son of Clarence E. and Lenora Smith Coffin. He attended Culver Woodcraft School and Culver Military Academy, both in Indiana, before receiving his appointment to the US Naval Academy, Annapolis, Maryland, from his native state in 1923. While a Midshipman he was a member of the Naval Academy Rifle Team; captained the Small Bore Rifle Team in 1927; and won the Gold Medal in the Individual Rifle Match in 1926. Graduated and commissioned Ensign on June 2, 1927, he advanced progressively to the rank of Captain, to date from March 20, 1945.

Following graduation in 1927, he remained at the Naval Academy for the short course in aviation, and in August of that year joined the USS Arizona. Detached after serving as a junior officer in that battleship until May 1929, he had successive duty with the Navy Rifle and Pistol Teams at the Naval Academy, at Wakefield, Massachusetts, and at Camp Perry, Ohio, in connection with the National Matches. He received a Letter of Commendation from President of the United States Herbert Hoover upon winning the “President’s Match at the 1929 National Matches with a record score of 147/150.

Returning to sea, he served in the USS Nevada from October 1929 to May 1931, interspersed with duty with the Navy Rifle and Pistol; Teams, shooting in the National Matches at Camp Perry in 1930 and 1931. He was awarded a silver medal in that National Individual Pistol Match and was designated US Distinguished Marksman in 1931. Reporting to USS Heron, operating in the Asiatic Area, in November 1931, he served as Executive Officer and Navigator until February 1933. From March of that year until December 1934 he was Gunnery Officer and Landing Force Officer of USS Guam of the Yangtze Patrol Force, and for five months thereafter served as Deck Watch and Division Officer in USS Antares.

He returned to Annapolis for instruction at the Postgraduate School, and upon completion of the General Line Course in May 1936, was assigned to the Navy Department, Washington, DC, under instruction in Naval Intelligence. In August 1937 he joined USS Tutuila of the Yangtze Patrol Force. He served as Executive Officer and had additional duty as Armed Guard Officer in Socony-Vacuum M. V. Mei Lu on the Upper Yangtze. In February 1939 he was detached from USS Tutuila at Chungking and proceeded overland with a Chinese Army transportation unit to Kunming, where he took the narrow-gauge railroad for the Indochina port of Haiphong. In March 1939 he reported to the American Embassy in Peiping, China, for instruction in the Chinese language.

Serving in USS Marblehead as Senior Assistant Engineer from December 1940 to May 1942, he is entitled to the Ribbon for, and a facsimile to the Navy Unit Commendation awarded that vessel, as follows:

“For outstanding heroism in action against enemy Japanese aircraft in the Java Sea Area on February 4, 1942. Operating without air support as a unit of a combined striking force of United States and Dutch cruisers and destroyers, the USS Marblehead was steaming north through Lombok Strait when an overwhelming force of Japanese aircraft appeared and launched a series of continuing bombing attacks. Fighting her guns gallantly against the enemy planes, she suffered two direct bomb hits on deck and one very near miss that exploded well forward under the turn of the bilge. With her electric power lost, her steering gear jammed and more than ten percent of her company dead or seriously wounded, she was quickly enveloped in flames that rages fore and after while inrushing waters flooded her lower compartments and sent her twelve feet down by the bow. Expertly handled y officers and men who risked their lives to jettison ready service powder bags, Lessen flooding in steering spaces and fight the fires that threatened to destroy her, she was enabled to continue in action and fight off additional and repeated air attacks by Japanese horizontal and dive bombers. Battle-damaged but unbeaten after the furious two-hour action in which she was credited with downing three enemy bombers, the Marblehead made port under her own power, evidencing her entire company and thereby upholding the highest traditions of the United States Naval Service.”

In June 1942 he reported as Navigator of the USS Raleigh, a cruiser who participated in the Attu Occupation and first bombardment of Musashi Wan-Kurabu Zaki. He was detached in April, and following a month’s duty during May and June of 1944, at the Amphibious Training Command, Atlantic Fleet, assumed command of LCI (R) Rocket Flotilla Sixteen. He was awarded the Legion of Merit “For exceptionally meritorious conduct… as Commander of LCI (R) Flotilla Sixteen during the amphibious assaults on Iwo Jima and Okinawa from December 1944 to June 1945…” The citation continues:

“Demonstrating outstanding initiative, skill and professional ability, Captain Coffin organized, planes and directed the operations of his ship in support in landings on enemy-controlled beaches. During the assault phases of these operations, despite intermittent air attack, enemy mortar fire and major caliber artillery fire, eh directed the ships of his Task unit in delivering close and effective rocket and gunfire in support of our ground forces, thereby contributing materially to the successful completion of these operations…”

He was also awarded the Bronze Star Medal with Combat “V,” and cited as follows: “For meritorious service as Commander LCI Flotilla Sixteen in action against enemy Japanese forces during the assault and capture of Okinawa from April to June 1, 1945. Commanding the LCI (R) (RCM) units which bombarded the Okinawa beaches with rocket fore on D-Day, Captain Coffin served as Commander Southern Support Gunboats and Commander Reserve Gunboats after the initial landing and was responsible for the details of smoke coverage for the hundreds of ships in Hagushi Anchorage. In addition to the administration of the smoke coverage and his antiaircraft screen, he led several close inshore rocket runs on the southern western coast of Okinawa and on the city of Naha…”

From December 1945 to August 1946 he served as Chief of Staff to the Commander, Chinese Amphibious Training Command, and as Senior US Naval Advisor. Thereafter until January 1947, he commanded consecutively the attack transport Renville and Bottineau. In March 1947 he reported for duty in the Officer of the Chief of Naval Operations, with additional duty in August 1948 with the Pistol Team. In September he was transferred to the Board of Decorations and Medals, and before his detachment in May 1949, again had additional duty with the National Pistol Matches.

In June 1949 he assumed command of the USS Bexas (APA 237), who participated in Korean operations in 1950-51. He was awarded a Gold Star in lieu of the Second Bronze Star Medal, “For meritorious achievement (in that command) during operations against the enemy in the Korean theater from 11 August to 21 September 1950…” He returned to the United States in March 1951, and served until October 1953 as Chief Officer to the Commanding Officer, US Naval Base, Los Angeles, California. Since that time he has been Group Commander of Naval Beach Group One.