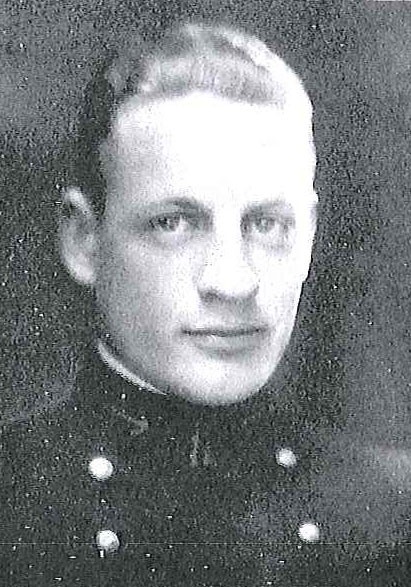 Captain Berner was born in Savanna, Illinois, on May 31, 1898. He attended Savanna Township High School before entering the United States Naval Academy, Annapolis, Maryland, from the State of Illinois on June 26, 1918, during World War I. While a Midshipman he was a member of the Crew Graduated and commissioned Ensign on June 3, 1922, he was subsequently promoted as follows: Lieutenant (junior grade), June 3, 1925; Lieutenant, June 3, 1928; Lieutenant Commander, June 30, 1937; Commander, January 1, 1942; and Captain, June 21, 1942.

Following graduation in June 1922, Captain Berner had sea duty for two years, being assigned to USS California, flagship of the United States Pacific Fleet. He served as turret officer of that battleship until August 1924, when he was ordered to the Naval Air Station, Pensacola, Florida, for flight training. He was designated Naval Aviator on March 16, 1925, and has served continuously in aviation since that time.

From the summer of 1925 until June 1927, he served aboard USS Nevada, and had duty with Observation Squadron 2, Aircraft Squadrons, Battle Fleet. The two succeeding years he served as communication officer of the Naval Air Station, San Diego, California. Reporting in the summer of 1929, to USS Jason, flagship and tender for Aircraft Squadrons, Asiatic Fleet, he served with Scouting Sqadron 8 on the Yangtze Patrol during operations in the Yangtze River Valley, China, and until the Spring of 1932 when he returned to the United States.

Returning to the Naval Air Station, Pensacola, Florida, in 1932, Captain Berner had duty as a ground school instructor for two years, after which, ordered to duty in aviation afloat, he reported to USS Langley for duty as flight deck and landing signal officer. Detached from the Langley early in 1937, he served consecutively as executive officer of Torpedo Squadron 2, based on the Saratoga, flagship of Aircraft, Battle Force and Carrier Division 1; and in command of Patrol Squadron 5, based at Coco Solo, Canal Zone. In the summer of 1939, he returned to the United States for duty as operations officer on the staff of Commander, Patrol Wing 5, based at Norfolk, Virginia.

Early in 1941 Captain Berner reported to Norfolk, Virginia, for duty with the Atlantic Fleet, serving first as operations officer and later as Chief of Staff of Commander, Patrol Wings, Atlantic Fleet, until early in 1943. Ordered to duty in charge of fitting out USS Sable, the Navy’s second inland training aircraft carrier converted at the Lake Erie Yard of the American Shipbuilding Company, he assumed command at her commissioning on May 8, 1943. Under his command the Sable, built with the island superstructure of a combat carrier, started her important career, the training of Navy fliers.

Captain Berner was relieved of command of the Sable in the spring of 1944, and following her fitting out assumed command of the Makassar Strait, under Captain Berner’s command, participated in the assault and occupation of Iwo Jima in February and March 1945, and Okinawa Gunto in April of that year. Detached from command of the Makassar Starit in October 1945, Captain Berner reported the following month for duty as Deputy Director of Aviation Personnel, Office of the Deputy Chief of Naval Operations (Air), and in August 1946, became Chief of Aviation Personnel. He was ordered on April 7, 1947 to assume command of the USS Wright (CVL-49), and commanded that vessel until May 18, 1948, when he was ordered to duty as Commander, Naval Air Bases, Tenth Naval District, San Juan, Puerto Rico.

Captain Berner is a member of the US Naval Institute and the Army-Navy Country Club, Arlington, Virginia.