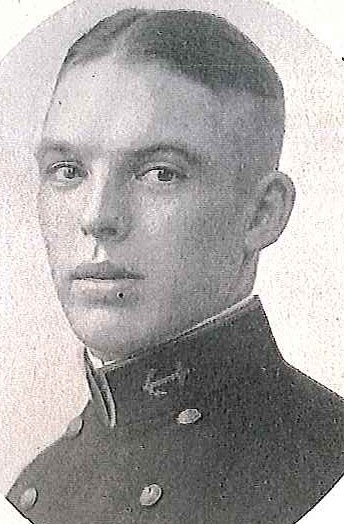 Edward Coyle Ewen was born in Portsmouth, New Hampshire, on May 26, 1897, son George S. and Jessica (Coots) Ewen. He attended Portsmouth High School and Tilton (New Hampshire) Academy, and in 1917 entered the U.S. Naval Academy, Annapolis, Maryland, upon appointment from his native state. As a Midshipman he served during World War I (the summer of 1918), aboard USS Wisconsin, operating with Atlantic Fleet; was active in athletics, winning his letter in football and lacrosse, was Captain of the football team for two years, and was awarded the Sword presented annually by the Navy Athletic Association to the Midshipman who excelled in athletics. Graduated and commissioned Ensign on June 3, 1921, he subsequently progressed in rank, attaining that of Roar Admiral, to date from July 21, 1944. On February 1, 1947 he was transferred to the Retired List of the US Navy and was advanced to the rank of Vice Admiral on the basis of combat awards.

Following graduation from the Naval Academy in 1921, he joined USS Florida, and in August 1923 was detached from that battleship for duty at the Naval Academy. He remained there until January 1924, when he was ordered to the naval Air Station, Pensacola, Florida, for flight training. Designated naval Aviator on August 15, 1924, he reported in December of that year for duty with Aircraft Squadrons, Battle Fleet, and was assigned to Scouting TWO. In July 1925 he transferred to Fighting squadron TWO, and during January 1927 was attached to Fighting Squadron SIX.

Between February 1927 and may 1929 he was assigned to the Naval Air Station, Pensacola, Florida, after which he had instruction in aviation ordnance at the Postgraduate School, Annapolis, Maryland and from march 1931 at the Navy Yard, Washington, DC. In June 1932 he joined Fighting Squadron TWO B, based on USS Lexington and two years later, June 1934, transferred to Observation Squadron THREE B, aviation unit of USS New Mexico. In April 1935 he was ordered to the Naval Air Station, Anacostia, DC, where he remained until June 1936. Following brief duty in the office of the Chief of Naval Operations, Navy Department, Washington, DC, he reported in August 1936 as Aviation Member of the Naval Mission to Brazil with headquarters in Rio de Janeiro.

He joined USS Enterprise in March 1939, and in May 1940, assumed command of the Air group aboard that aircraft carrier. Returning to duty ashore in May 1941, he was assigned for two months in Office of the Chief of Naval Operations, Naval Department, and in July become Assistant naval Attaché and Assistant Naval Attaché for Air at the American Embassy, London, England. He continued to serve in that capacity until September 1941, when he was assigned to the Fleet Training Division, Office of the Chief of Naval Operations. In February 1942 he transferred to Headquarters, Commander in Chief, US Fleet, Navy Department, where he remained until January 1943.

Ordered to the Seattle-Tacoma Shipbuilding Company, Tacoma, Washington, he was in charge of the fitting out of USS Breton. She was put into commission as an auxiliary aircraft carrier on April 12, 1943, and he assumed command. Under his command she operated along the West Coast until June 1943, when she was ordered to the Pacific assigned to the New Hebrides area. Detached from command of the Breton in December 1943, he was next in command of Roi and Manur Islands in the Marshall Islands, February 1, 1944 until July 11, 1944, during the months following the American conquest of that area. For outstanding services in that capacity, he received a Letter of Commendation, with authorization to wear the Commendation Ribbon, from the Commander in Chief, US Pacific Fleet, and the Legion of Merit with Combat “V.”  The citations follow in part:

Letter of Commendation: “For extraordinary heroism...as Commander of Roi Island, during the bombing of that island by enemy aircraft of the night of February 11-12… amidst an inferno of bursting bombs, shells and pyrotechnic caused by a bomb hit on an ammunition dump to direct the establishing of dressing stations and the evacuation of the wounded. By his presence and courage he inspired his officers and men…”

Legion of Merit:  “For exceptionally meritorious conduct…as Commander of Roi and Namur, Marshall Islands, during operations against enemy Japanese forces in that vicinity from January 1 to July 11, 1944… (He) was responsible in large measure for the almost immediate establishment of aircraft facilities at Roi and, in his additional capacity as Commanding Officer of the Roi Naval Air Base, he planned and supervised the construction of a base from which the enemy present in the Marshall Islands could be sought out and destroyed…”

In July 1944 he assumed command of USS Independence, and for meritorious conduct in that capacity, was awarded the Navy Cross and a Gold Star in lieu of a Second Legion of Merit with Combat “V”. The citations follow in part:

Navy Cross: “For extraordinary heroism as Commanding Officer of USS Independence, during operations against the enemy in September and October 1944. Expertly commanding the Independence in the first night carrier operations in the Pacific, (he) brought to bear the full fighting strength of his ship and air groups and, through his foresight and tactical ability, directed them in destroying hostile lead attack planes and airborne tractors to breakup enemy air attacks before they could develop. His courage… during long periods of sustained action reflect the highest credit on Rear Admiral Ewen, his gallant officers and men and he United States Naval Service.”

Gold Star in lieu of second of Merit: “… as Commanding Officer of USS Independence during operations against enemy Japanese forces in the Pacific war Area from August 29, 1944 to January 25, 1945… He was responsible for development of most of the current and tactics of night carrier operations and, by his inspiring leadership and resourcefulness, contributed materially to the success of the Navy in the Pacific…”

On July 28, 1950 he become Commander Carrier Division ONE, Pacific Fleet, and in August 1950 assumed command of Task Force SEVENTY SEVEN, operating in the Korean area. For meritorious service in the latter command, he was awarded the Distinguished Service Medal and the Army Silver Star Medal. The citations follow in part:

Distinguished Service Medal:  “For exceptionally meritorious service…as the Commander Task Force SEVENTY SEVEN in operations against enemy forces in the Korean area from July 31, 1950 to December 5, 1950. Directing various Task Units with great tactical skill and exceptional foresight, Rear Admiral Ewen enabled his pilots to attack shore installations throughout Korea and to furnish invaluable close air support to the ground forces fighting therein. Despite serious obstacles presented by sea and weather conditions vital air support was made available to ground forces where ever possible and his air strikes were carried to the rear of enemy-held territory throughout Korea. His complete knowledge of carrier air operating and grasp of the military situations made it possible for the naval air arm to give vital support to naval surface forces prior to and at Inchon during the period September 1 to September 21, 1950 and again during the Wonsan landing…”

Army Silver Star Medal: He “distinguished himself by conspicuous gallantry in action in the Inchon-Seoul operations during the period September 15-21, 1950. His actions contributed materially to the success of this operation…”

He returned to the United States and on June 25, 1951, became Commander Fleet Air, Alameda, California, and in April 1954, transferred to duty as Commander Fleet Air, Eastern Atlantic and Mediterranean. He continued to serve in that capacity until February 1956. He was hospitalized for a year prior to his retirement, effective February 1, 1957.