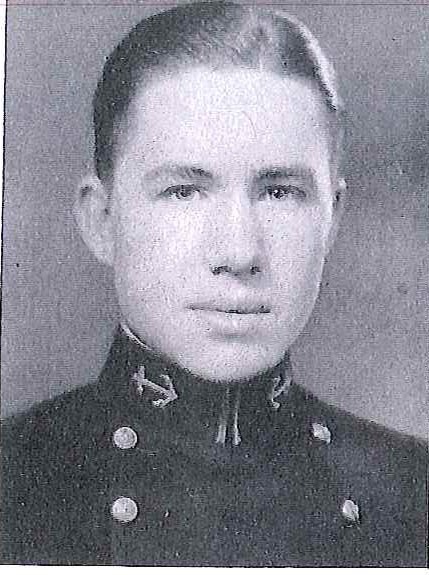 Horace Virgil Bird was born in Ryan, Oklahoma, on June 16, 1912, son of Homer V. and Ellen Jackson Bird, both now deceased. He attended Central High School in Oklahoma City, before entering the US Naval Academy, Annapolis, Maryland in 1929. As a Midshipman he was a member of the N Club, and the Plebe and Varsity Lacrosse and Soccer Teams (Manager 1930-1932). Graduated and commissioned Ensign on June 1, 1933, he subsequently attained the rank of Rear Admiral, to date from May 1, 1963.

After graduation from the Naval Academy he was assigned to USS Colorado and during this tour of duty was commended by the Commander Battleship Division ONE, for the Colorado’s illumination plan which had contributed to the ship’s creditable performance in gunnery practices. His paper “Night Illumination,” written while he was attached to that battleship, was considered worthy of distribution to the Fleet. Detached from the Colorado in May 1937, he transferred to USS Henley, the first new single-stacked destroyer. He performed the duties of Gunnery, Torpedo and Communication Officer and constructed a star-shell deflection computer, for which he was commended by the Chief of the Bureau of Ordnance.

Returning to Annapolis, Maryland, in July 1939, he attended a course in applied communications at the Postgraduate School. This course was interrupted by the outbreak of war in Europe and in September of that year he joined the Staff of Commander Destroyer Squadron Thirty as Operations and Communication Officer. While so serving, he was one of the officers commended by the Canadian Prime Minister and the Chief of Naval Operations for the efficient transfer of fifty United States’ destroyers to Canada and the United Kingdom.

He reported, in October 1940, as Operations and Communication Officer on the Staff of Commander Destroyer Squadron THIRTY-THREE, and in December of the same year joined the Staff of Commander Train, Patrol Force (later redesignated Commander Service Force, US Atlantic Fleet) to serve as Flag Lieutenant and Gunnery Officer. He was awarded the Navy Commendation Medal for his “…marked ability in the furtherance of development of the overall gunnery training of the Atlantic Fleet…”

On May 4, 1942, he became Assistant Director of Officer Procurement in the Bureau of Naval Personnel, Navy Department, Washington, DC. During these early days of commissioning thousands of reserve officers, he maintained a constant liaison with Congress and his attempts in obtaining speedy answers to the many questions arising in regard to commissions brought commendations from members of the House and Senate.

Ordered to the Navy Yard, New York, New York, he assisted in the fitting out USS Missouri. He reported aboard as Assistant Gunnery Officer upon her commissioning, June 11, 1944. When the Missouri reached the combat area, he assumed the duties of Gunnery Officer. She participated in the following actions against the enemy: First carrier raids on Kyushu; bombardment of Okinawa; bombardment of Muroran, Hokkaido, Japan; night bombardment of Hitacho area, Honshu, Japan; and carrier strikes on Hokkaido, Honshu and Kyushu.

On September 2, 1945, after the cessation of hostilities, he was in charge of arrangements for the ceremonies incident to the signing of Japanese surrender articles aboard the Missouri and for the success and smoothness of this operation received a Letter of Commendation from General MacArthur with authorization to the wear the Army Commendation Ribbon.

He also received the Gold Stars in lieu of the Second and Third Commendation Medals, from Commander in Chief, US Pacific Fleet for excellent service as Gunnery Officer of the Missouri, reading in part: “…(He) contributed materially to the effectiveness of the gunfire of the antiaircraft battery with resulted in the destruction of eleven enemy planes…” and “…His professional skill and leadership contributed materially to the success of the main battery bombardment of enemy war and industrial installations…”

Assigned on July 15, 1948, to the cruiser USS Springfield, he was serving as Executive Officer when she departed Long Beach, California, for the Far East, where she remained for nine months. During this period, China fell to the Communist forces and the Springfield was the last large warship in Shanghai and Tsingtao before these two cities capitulated.

Detached from the Springfield on September 22, 1949, he assumed command of the USS Rogers, at that time one of the latest and largest destroyers in the Navy. He commanded that ship until February 11, 1951, when he joined the Staff of Commander Cruiser-Destroyer Force, US Pacific Fleet, as Assistant Operations Officer.

From October 1951 to August 1953 he served as Administrative Aide to the Secretaries of the Navy Dan Kimball and Robert Anderson, after which he attended the course in naval warfare at the Naval War College, Newport, Rhode Island.

In June 1954 he reported as Chief of Staff and Aide to Commander Destroyer Flotilla TWO and remained in that position until January 1956. During this period Destroyer Flotilla TWO became Task Group CHARLIE of the Atlantic Fleet and pioneered in anti-submarine warfare with particular emphasis on escorts of convoys. He developed new types of ASW screens for convoys which are in present day use. He expanded this development to include screens for fast carrier forces while in command of Destroyer Squadron TWENTY-TWO in Norfolk during January 1956. While deployed with this squadron in the SIXTH Fleet, his ASW screens were perfected and represent today some of the most advanced theory in this phase of Naval Operations.

In August 1960 he was designated Chief of Staff, Commander FIRST Fleet and remained with this command until January 1961 when he was ordered to duty as Aide to Vice President Lyndon B. Johnson. In this capacity he was one of the Vice President’s principal assistants and one of the few military men to ever serve in that capacity while on active duty.

In May 1962 he became Chief of Legislative Affairs, Navy Department and served until he was detached in July 1963, to take command of Cruiser Destroyer Flotilla ELEVEN in San Diego. He was in command of Cruiser-Destroyer SEVENTH Fleet when the ships took part in the second Gulf of Tonkin incident, for which he received a Gold Star in lieu of the Fourth Navy Commendation Medal. On November 9, 1964, he assumed duties as Commander Naval Forces, Marianas and Representative of the Commander in Chief, Pacific in the Marianas—Bonin Islands, Deputy Military Governor of the Bonin Islands and as Commander Task Forces THIRTY-FOUR and NINETY-FOUR. For service while in Guam, he was awarded the Legion of Merit.

Admiral Bird assumed command of the Mine Force, US Pacific Fleet and additional duties as Commander US Naval Base, Los Angeles and Senior Officer Present Afloat Los Angeles/Long Beach on May 22, 1967. Additionally, he was the Department of Defense area coordinator for all the armed services in the Los Angeles metropolitan area.

His Pacific Mine Force, homeported in Long Beach, consisted of over 90 ships and 5,000 men throughout the Pacific. As Commander Naval Base, Los Angeles, Rear Admiral Bird exercised area coordination over 341 naval commands in Los Angeles and Orange counties. As Senior Officer Present Afloat he was responsible for all Navy ships present in the Log Angeles-Long Beach area. This included over 120 ships and 40,000 sailors homeported in Long Beach. This force included four aircraft carriers, two cruisers including the nuclear powered cruiser Long Beach and over 30 destroyer type ships including the nuclear powered frigates Bainbridge and Truxton.

Upon the disestablishment of Mine Force, US Pacific Fleet on July 1, 1971, his additional duty became his primary assignment. He was awarded a Gold Star in lieu of the Second Legion of Merit and was cited for contributing “…greatly to the readiness and capabilities of the United States Pacific Fleet…” He served as such until relieved of active duty pending his retirement, effective August 1, 1971.

His ancestors were among the original settlers of Oklahoma. He is the brother of Brigadier General John Bird, US Army, Retired. Died November 6,  1984.