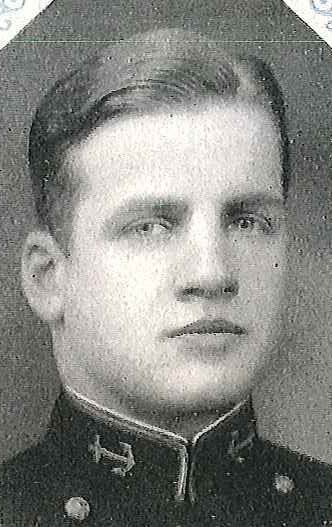 Richard Nott Antrim was born in Peru, Indiana, on December 17, 1907, son of Nott Waldo and Mary Margaret (Weckler) Antrim.  He attended Peru High School and on June 28, 1926 enlisted in the US Naval Reserve.  Honorably discharged in 1927, he accepted an appointment to the US Navy Academy, Annapolis, Maryland, from his native state.  As a Midshipman, he excelled in football, winning his varsity “N”.  Graduated and commissioned Ensign on June 4, 1931, he subsequently progressed in rank, attaining that of Captain, to date from July 1, 1950.  On April 1, 1954, he was transferred to the Retired List of the US Navy and was advanced to the rank of Rear Admiral on the basis of combat awards.

Following graduation from the Naval Academy in 1931, he had brief instruction in the Eleventh Naval District, San Diego, California, prior to reporting in August, as Fire Control Officer on board USS New York.  Detached from that battleship in April 1932, he was ordered to the Naval Air Station, Pensacola, Florida, for instruction.  Between June and November 1932, he had consecutive duty in the USS Salinas, USS Nitro and USS Trenton.

Ordered to the Bethlehem Shipbuilding Corporation, Quincy, Massachusetts, he assisted in the fitting out of USS Portland, and from December 1932 to February 1933 had instruction at the Navy Yard, Washington, DC.  Upon the commissioning of the Portland on February 23, 1933, he joined her to serve as Division Officer until April 1936.  For two months, he served as Assistant First Lieutenant of the USS Crowninshield, after which he was assigned to the Naval Air Station, Lakehurst, New Jersey, for duty with lighter-than-aircraft, and as airship, kite and free balloon pilot.  (Received his designation as Naval Aviator (LTA) on September 20, 1940).

In May 1938, he joined USS Bittern as Executive Officer, and in December 1939 was transferred to USS Pope.  He was serving in that destroyer, attached to the Asiatic Fleet, when the United States entered World War II, December 8, 1941.  The Pope had an illustrious record in every major engagement in the Dutch East Indies – the battles of Makkassar and Badoeng Straits, and finally the Battle of the Java Sea, until she was sunk on the evening of March 1, 1942.  The Pope and HMS Encounter were directed to escort HMS Exeter, damaged during the Java Sea action, and the cruiser and the two destroyers left Soerabaja the evening of February 28.  Next morning, midway between Java and Borneo, enemy surface and air forces launched an attack.  The three Allied ships fought four Japanese heavy cruisers and four destroyers during a severe three-hour action and succeeded in damaging a number of the enemy ships.  By noon, the two British ships were destroyed by enemy gunfire.  An hour later the Pope was attacked by twelve bombers and four level bombers.  She was so severely damaged that she became unmaneuverable, charges were set to destroy her, and the crew abandoned ship.

“For extraordinary heroism…during action against enemy Japanese forces in the Battles of Macassar Straits, Badoeng Strait and the Java Sea, on January 24, the night of February 19-20 and March 1, 1942…”, he was awarded the Navy Cross.  The citation continues in part:

“Engaging the enemy for twenty-five minutes off Balikpapan, (he) coolly selected targets at extremely short range for his guns and torpedoes, placing his shots so accurately in the midst of a large Japanese convoy that considerable damage was inflicted upon several enemy vessels.  With this ship engaging a Japanese cruiser 1500 yards near Bali, Commander Antrim directed main battery and machine gun fire against the hostile ship to blast a search light, which had illuminated the Pope.  Under his skilled direction during this action, the gun crews scored several damaging torpedo and gun hits.  When his ship was attacked and damaged by hostile heavy cruisers, large destroyers and aircraft in the Java Sea, he rendered valiant service in defending the ship and in supervising the orderly transfer of wounded to the motor whale boat as the crew abandoned their sinking destroyer.  Although painfully wounded, Commander Antrim calmly directed his men over the side in small, orderly groups and, in the water, gathered the remaining life rafts around the boat to distribute food and water, gathered the remaining life rafts around the boat to distribute and devotion to duty in the face of grave personal danger were inspiring to those with whom he served…”

He was also awarded the Purple Heart Medal for wounds received in enemy action on March 1, 1942, and is entitled to the Ribbon for, and a facsimile of the Presidential Unit Citation awarded USS Pope and received the Army Distinguished Unit Emblem awarded personnel on duty in the Philippines during the defense of the islands.

After the sinking of the Pope, no world was heard from the survivors until three and one half years later, after the Japanese surrender, when they were liberated from Japanese Prison Camps.  It was then learned that the survivors, numbering one hundred and fifty, managed to hold together for three days, and on the third night, when they were also exhausted were picked up by a Japanese destroyer and two days later were turned over to land forces at Makassar.

For outstanding services while a Prisoner of War, he was awarded the Medal of Honor, which was presented to him by President Harry S. Truman at ceremonies at the White House on January 30, 1947, and the Bronze Star Medal.  The citations follow in part:

Medal of Honor:  “For conspicuous gallantry…at the risk of his life above and beyond the call of duty while interned as a Prisoner of War of the enemy Japanese in the city of Makassar, Celebes, Netherlands East Indies, in April 1942.  Acting instantly on behalf of a Naval officer who was subjected to a vicious clubbing by a frenzied Japanese guard venting his insane wrath upon the helpless prisoner, (he) boldly intervened, attempting to quiet the guard and finally persuading him to discuss the charges against the officer.  With the entire Japanese forces assembled and making extraordinary preparations for the threatened beating, and with the tension heightened by 2700 Allied prisoners rapidly closing in, Commander Antrim courageously appealed to the fanatic enemy, risking his own life in a desperate effort to mitigate the punishment.  When the other had been beaten unconscious by fifteen blows of a hawser and was repeatedly kicked by three soldiers to a point beyond which he could not survive, Commander Antrim gallantry stepped forward and indicated to the perplexed guards that he would take the remainder of the punishment, throwing the Japanese completely off balance in their amazement and eliciting a roar of acclaim from the suddenly inspired Allied prisoners.  By his fearless leadership and valiant concern for the welfare of another he not only saved the life but also brought about a new respect for American officers and men and a great improvement in camp living conditions…”

Bronze Star Medal:  “For meritorious conduct…while a Japanese Prisoner-of-War.  He was forced to take charge of a labor party and assigned the task of constructing slit trenches for bomb protection.  Through self-effacing courage and sheer audacity of purpose, he caused to be constructed under the very eyes and alert surveillance of Japanese guards, a huge sign “US.”  This was done by rearranging the construction work of the slit trenches from the Japanese to concur in the changes suggested.  The sign, if recognized by the Japanese, would have insulted in Antrim’s immediate beheading, but Antrim’s well-thought plan would result in Allied photographs indicating the occupants of the trenches and thus save hundreds of Allied prisoners’ lives…”

Liberated in September 1945, he was returned to the United States and after rehabilitation leave, reported in May 1946 for the Repatriated Prisoner of War Refresher Course at the Navy Yard, Washington, DC.  Between April and June 1946 he had further instruction at the Naval Air Station, Lakehurst, New Jersey, after which he completed a course at the Naval War College, Newport, Rhode Island.  During June and July 1947 he had training at the Fleet Sonar School, San Diego, California, after which he had duty in command of USS Turner.

Detached from command of the Turner in October 1948, he had four months’ instruction at the Naval Air Station, Lakehurst, New Jersey, reporting in December as Assistant for Lighter Than Air Planning and Programs in the Office of the Chief of Naval Operations, Navy Department, Washington, DC.  He remained there until October 1950, when he was assigned to the Department of State, Washington, DC, for duty on the Policy Advisory Staff.  He was attached to the Psychological Strategy Board, Washington, DC, from October 1951 to August 1952, when he assumed command of the USS Montrose.

In June 1953, he became Head of the Naval Amphibious Warfare Matters Section, Office of the Chief of Naval Operations, Navy Department and served in that capacity for a month.  He was hospitalized prior to his retirement, effective April 1, 1954.