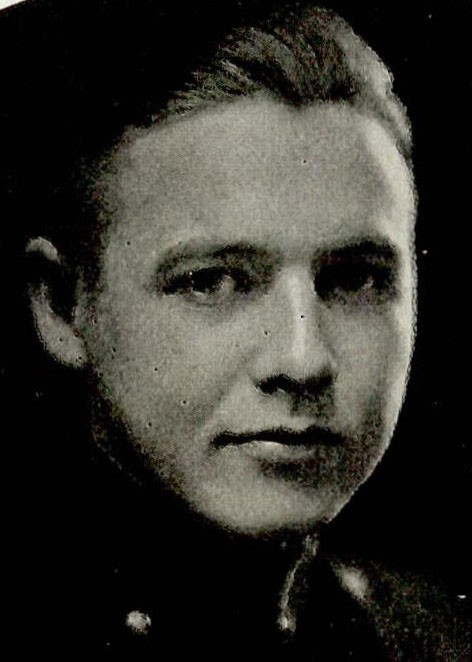 Thomas Joseph Casey was born in Boston, Massachusetts, on August 5, 1901, son of Timothy John and Catherine (Moylan) Casey. He attended Boston Latin School prior to his appointment to the US Naval Academy, Annapolis, Maryland, from his native state in 1919. As a Midshipman, he participated in varsity soccer, and class lacrosse. Graduated and commissioned Ensign on June 7, 1923, he subsequently advanced in rank, attaining that of Captain, to date from May 1, 1943.

Following graduation from the Naval Academy in 1923, he had consecutive duty afloat in USS Delaware, USS Florida, USS Paul Hamilton, and USS Zeilin. Detached from the latter in June 1928, he was assigned to Postgraduate School, Annapolis, Maryland, for instruction in mechanical engineering. He continued the course at Columbia University, New York, New York, receiving the degree of Master of Science from that University in December 1930.

Ordered to the Navy Yard, Mare Island, California, he assisted in fitting out USS Chicago, and joined the cruiser upon her commissioned on March 9, 1931. He continued to serve in that vessel until July 1934, when he became Assistant Inspector of Machinery at the Bath Iron Works, Bath, Maine. He was Executive Officer of USS King from June 1937, when he reported for fitting out duty in USS Jarvis at the Puget Sound Navy Yard, Bremerton, Washington, and as Executive Officer of that destroyer upon her commissioning, October 27, 1937. He was ordered to command of the Jarvis in December 1938.

Relieved of command of the Jarvis in June 1939, he returned to the United States, and had duty as an Instructor in the Department of Marine Engineering at the Naval Academy. In February 1941 he joined the staff of Commander Scouting Force, US Pacific Fleet, as Aide and Flag Secretary, and continued to serve in that capacity, following the United States entry into World War II, December 8, 1941. Following the reorganization of the Fleet early in 1942, he was assigned similar duty on the staff of Commander Task Force Three, and Commander task Force Eleven. “For meritorious conduct… (in the latter duty) in tUSS Indianapolis, from December 7, 1941 to January 5, 1942, and from the latter date to March 26, 1942 in USS Lexington, during operations against enemy Japanese forces in the Pacific…” he received a Letter of Commendation with authorization to wear the Commendation Ribbon and Combat “V” from the Commander in Chief, US Pacific Fleet. The citation continues in part:

“During this critical period when the enemy was rapidly extending his forces, he rendered extremely valuable service to his Commanding Officer in assisting in the development of the operating plans of the task Force, in his demonstrated ability as a Flag Watch Officer, and particularly his services, assistance and outstanding conduct during two successful engagements in which the Task Force destroyed sixteen attacking enemy bombers and two scouting planes east of Rabaul, and sank or damaged fifteen Japanese combatant and merchant ships off New Guinea…”

Between May and September 1942 he served on the staff of Commander Amphibious Force, US Pacific Fleet, and following fitting out duty in USS Iowa at the Navy Yard, New York, New York, he joined that battleship as Executive Officer upon her commissioning, February 22, 1943. Returning to the United States in January 1944, he reported as Training Officer for the Large Ship-Commissioning Training Program at the Naval Training Station, Newport, Rhode Island. He was awarded the Legion of Merit for “exceptionally meritorious conduct… (in that assignment) from January 1944 to June 1945…” The citation further states in part:

In August 1945 he assumed command of USS Cecil, and in May 1946 transferred in a similar capacity to USS Oakland. He commanded that cruiser for a year before reporting in June 1947 as General Inspector, Bureau of Naval Personnel, Navy Department, Washington, DC he remained there until March 1949 after which he was in command of the Naval School, General Line, Monterey, California. In October 1951 he joined the staff of Commander United Nations Blockading and Escort Force, Seventh Fleet, and served in that duty until August 1952. He then became Officer in Charge of the US Naval Biological Laboratory, Naval Supply Center, Oakland, California, his preset assignment.