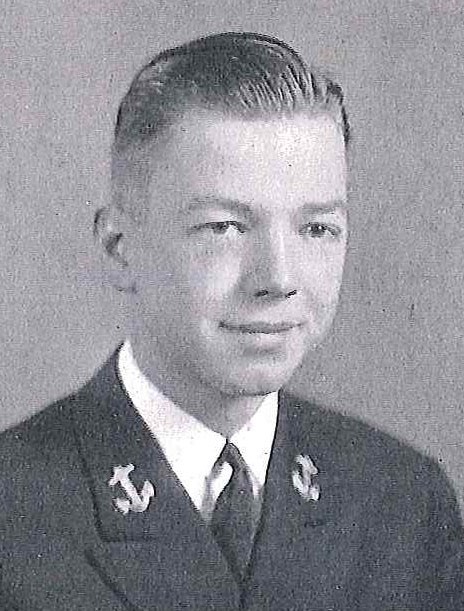 Parker Broadhurst Armstrong was born in Hartford, Connecticut, on November 13, 1918, son Lloyd V. and Nell (Broadhurst) Armstrong.  He attended Montclair (New Jersey) High School; Montclair Academy and Cochran-Bryan Preparatory School, Annapolis, Maryland, prior to enlisting on June 28, 1937 in the US Naval Reserve.  On June 30, 1938, he was honorably discharged to accept an appointment from the State of New Jersey to the US Naval Academy, Annapolis, Maryland.  Graduated with the Class of 1942 on December 19, 1941 (accelerated course due to the National Emergency), he was commissioned Ensign and subsequently advanced in rank to that of Rear Admiral, to date from August 1, 1968.

Following graduation from the Naval Academy in 1941, he joined USS Brooklyn (CL-40), in which he served throughout the World War II period and until December 1945.  While attached to that cruiser, he saw action during the Algeria-Morocco landings; actions off Casablanca, Sicilian occupation; Anzio-Nettuno advanced landings; invasion of Southern France and bombardments of Formia-Anzio area.  He next had instruction in electrical engineering at the Postgraduate School, Annapolis, Maryland, and received the degree of Master of Science in 1948.  Between June and August of that year, he had training at the Naval Damage Control Training Center, Philadelphia, Pennsylvania, then had duty afloat as Engineer Officer of USS Macon (CA-132).  He had instruction at the Naval Combat Information Center Team Training Center, Boston, Massachusetts, during April and May 1950, when reported as Executive Officer and Navigator on board USS Harry F. Bauer (DM-26).

Assigned in April 1951 to the Training Division, Bureau of Naval Personnel, Navy Department, Washington, DC, he remained there until January 1954, and after training with the Cruiser-Destroyer Force, Pacific Fleet, he  assumed command in March of that year of USS Southerland (DDR-743), which operated in the Korean area.  Detached from command of that radar picket destroyer in January 1956, he returned to the Bureau of Naval Personnel, where he served as Lieutenant (junior grade) and Ensign Assignment Officer in the Officer Distribution Division.  In July 1958, he reported for instruction at the Industrial College of the Armed Forces, Washington, DC, and in June 1959 became Commander Escort Squadron FOURTEEN.

From September 1960 to August 1963, he was Administrative Aide to the Deputy Chief of Naval Operations (Development), Navy Department, after which he served as Chief of Staff and Aide to the Commander Cruiser-Destroyer Flotilla THREE.  In June 1964, he assumed command of USS Norfolk (CL-1) and in July 1965 transferred to command of Destroyer Squadron THIRTY-SIX.  In January 1966, he joined the Staff of Commander Cruiser-Destroyer Force, US Atlantic Fleet and in that assignment commanded the MATCH MAKER II Squadron—a four-nation NATO squadron which participated in operations to emphasize newly formulated and existing NATO tactics.

In July 1966, he reported as Deputy Assistant Director (Sea Warfare Systems) of the Office of Defense Research and Engineering, Office of the Secretary of Defense, Washington, DC, and was awarded the Joint Service Commendation Medal.  The citation follows in part:  “…As a result of his broad background of experience in fleet operations as well as in the management of Navy research and development programs, and of his tact, diplomacy, untiring energy, and basically sound judgment, he was instrumental in the successful prosecution of all of the Research and Development programs managed by the Sea Warfare Systems Office…”

In October 1967, he became Director of the Undersea Warfare ad Strategic Warfare Development Division, Office of the Chief of Naval Operations. He was awarded the Legion of Merit “for exceptionally meritorious service from October 1967 to March 1969…” The citation further states in part: “…(His) exceptional ability to guide and motivate military and civilian experts, scientists, and industrialists to concerted effort resulted in the construction of sound, coherent, and complementary Navy programs for the development of future antisubmarine warfare weapons systems which will encompass every feasible technological innovation…”

He became Commander Cruiser-Destroyer Flotilla TEN in March 1969 and “for exceptionally meritorious service from March 1969 to July 1970…” was awarded a Gold Star in lieu of the Second Legion of Merit. The citation continues in part: “…Rear Admiral Armstrong was responsible for and directly and effectively supervised the overall readiness of all ships and staffs in Cruiser-Destroyer Force matters in the U.S. SIXTH Fleet…”

In August 1970 he reported as Manager of the Antisubmarine Warfare Systems Project, Naval Material Command, Washington, D.C. and “for exceptionally meritorious conduct…” in that capacity was awarded a Gold Star in lieu of the Third Legion of Merit. The citation further states in part: “…During his tenure, he established an extremely effective management program which was insured that ASW programs were developed and reviewed to meet the requirement of the Chief of Naval Operations and that production of ASW equipment was in consonance with directives from the Secretary of the Navy…”

In July 1972 he assumed command of the Service Force, U.S. Pacific Fleet and in September 1973 was assigned additional duty as Deputy Chief of Staff for Logistics to the Commander in Chief, U.S. Pacific Fleet. “For exceptionally meritorious conduct…from July 1972 to March 1974…” he was awarded a Gold Star in lieu of the Fourth Legion of merit. The citation continues in part: “As Principal Logistic Agent within the Pacific Fleet. (he) directed the efforts of his vast command in providing unfaltering support to the units of the U.S. Pacific Fleet…”

In May 1974 he became Deputy Director of Research, Development, Test, and Evaluation, Office of the Chief of Naval Operations, Navy Department.