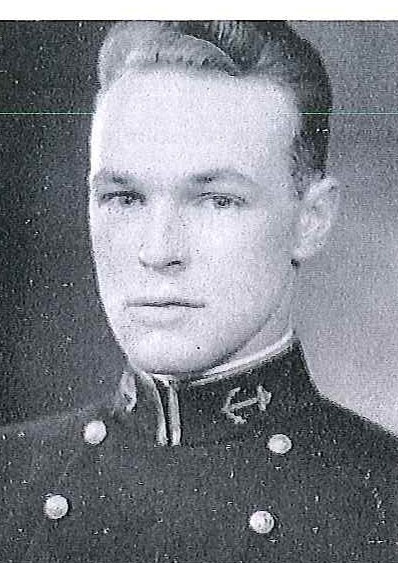 Vice Admiral Frederick L. Ashworth was born on 24 January 1912 in Beverly, Massachusetts. He attended Dartmouth College, Hanover, New Hampshire, for a year before entering the US Naval Academy, Annapolis, Maryland. He was graduated and commissioned an Ensign on 1 June 1933 and advanced to the rank of Vice Admiral on 11 May 1966.

Vice Admiral Ashworth, after graduating from the Naval Academy, was assigned to the battleship USS West Virginia. After a period of two years in the battleship force he was selected for flight training which he completed on 12 June 1936 with the designation as a Naval Aviator. Following his aviation qualification, he served in carrier based aircraft squadrons and in addition completed postgraduate training at Annapolis, Maryland, with a specialty in ordance engineering (aviation). At the time the United States entered World War II he was serving in the Bureau of Ordance, Washington, DC. Throughout World War II he served in several areas of the Pacific theater as commanding officer of a torpedo aircraft squadron and on the staff of the Amphibious Force, Pacific Fleet, wherein he distinguished himself with his leadership and professional ability in handling military operations. During the later stages of war he was detailed to the Manhattan Project. In the years following World War II he served with several agencies concerned with the military applications of atomic energy. In December 1949 he was assigned as executive officer of USS Midway (CVA41) and in sequence to the Atomic Energy Commission, Washington, DC, as commanding officer of the aircraft carrier USS Franklin D. Roosevelt (CVA42), and as Commandant of Midshipmen at the US Naval Academy, and as Director of the Atomic Energy Division, Office of the Chief of Naval Operations, Navy Department. In June 1960 he reported as Commander Anti-Submarine Warfare Carrier Division EIGHTEEN in the US Atlantic Fleet where he served until January 1961. Following this assignment he was Assistant Chief of the Bureau of Naval Weapons for Research, Development, Test and Evaluation, Navy Department and Commander Attack Carrier Division ONE, operating in the US Pacific Fleet. Immediately prior to his assignment as Commander Sixth Fleet, he was Deputy Chief of Staff, Headquarters, United States European Command, in Paris. In April 1967 he became Deputy Commander in Chief, US Atlantic Fleet and Chief of Staff and Aide to the Commander in Chief, U.S. Atlantic/Commander in Chief, Atlantic Fleet/Commander in Chief, Western Atlantic Area. He served as such until relieved of active duty pending his retirement, effective September 1, 1968.