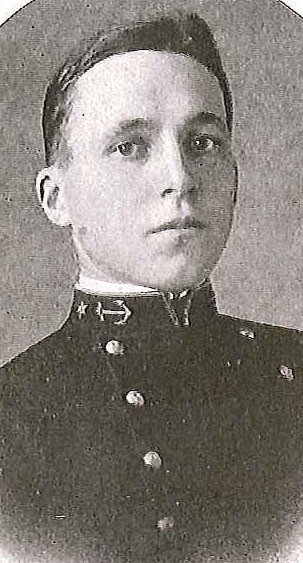 Mervyn Sharp Bennion was born in Vernon, Utah, on May 5, 1887, son of Israel and Jeannette Sharp Bennion. He entered the US Naval Academy in June 1906 after attending high school in Salt Lake City, Utah. Following graduation on June 3, 1910, he served the two years at sea, then required by law before commissioning, in the USS California and USS Cincinnati, and upon receiving his commission on March 7, 1912, was assigned engineering duty on board the California. He subsequently advanced to the rank of Captain, his date of rank June 2, 1938.

From April 1912 until September 1915 he continued duty afloat, serving in USS California, USS Annapolis, USS St. Louis and USS Colorado. He then returned to Annapolis for instruction in Ordnance at the Naval Postgraduate School, continuing the course at the Naval Proving Ground, Indianhead, Maryland, and the Navy Yard, Washington, DC. Detached from the latter on March 1, 1917, he reported to the USS North Dakota, in which he served throughout the first year of World War I.

Duty in connection with fitting out USS New Mexico preceded service on board that battleship from her commissioning, May 30, 1918, until January 4, 1919. He then reported to the Bureau of Ordnance, Navy Department, Washington, DC, where he remained on duty until December 27, 1920. He then assisted in fitting out USS Maryland at the Newport News Shipbuilding and Dry Dock Company, and served as her Assistant Fire Control Officer from her commissioning, July 21, 1921, until May 1923.

He next joined the USS Florida, at Annapolis, Maryland, for duty as Gunnery Officer, and upon detachment had brief duty at the Naval Proving Ground, then located at Dahlgren, Virginia. On April 12, 1926 he reported on board the USS Tennessee, for duty as Gunnery Officer. He remained in that assignment until transferred a year later to duty as Navigator of USS Maryland. Then followed a tour of duty in the Bureau of Ordnance, after which he commanded the USS Bernadou from July to October 1932, and USS Biddle from October 1932 until May 1933.

He served briefly as Commander Destroyer Division ONE and as Commander Destroyer Division NINE, and when detached from the latter command on July 22, 1933, joined the Staff of the Commander in Chief, US Fleer, to serve for a year as Fleet Training Officer. He was a student at the Naval War College, Newport, Rhode Island, from June 1934 until May 1935, and for a year thereafter served on the Staff of that institution. In June 1936 he joined USS Arizona, remaining in that assignment until transferred in June 1937 to command of USS Nitro. Another tour of duty in the Bureau of Ordnance, Navy Department, was followed by Captain Bennion’s last command.

On June 21, 1941, he was ordered to duty as Commanding Officer of USS West Virginia. He died alone on her bridge after being mortally wounded on the morning of December 7, 1941, during the Japanese attack on the Fleet at Pearl Harbor, his great concern being not for himself, but for his burning ship and the safe removal of his men. He was posthumously awarded the Medal of Honor by the President of the United States. The citation follows:

Medal of Honor: “For conspicuous devotion to duty, extraordinary courage, and complete disregard of his own life, above and beyond the call of duty, during the attack on the Fleet in Pearl Harbor, Territory of Hawaii, by Japanese forces on December 7, 1941. As Commanding Officer of the USS West Virginia, after being mortally wounded, he evidenced apparent concern only in fighting and saving his ship, and strongly protested against being carried from the bridge.”

A destroyer, the USS Bennion (DD-662), was named to honor Captain Bennion. His widow, who resided at 80 “D” Street, Salt Lake City, Utah, christened to the Bennion when that ship was launched at the Boston, Massachusetts, Navy Yard on July 4, 1943. The USS Bennion was commissioned on December 14, 1943, and earned the Presidential Unit Citation for heroic participation in the Okinawa Campaign, on April 1, 1945. She also participated in the Marianas operation; capture of Tinian and its occupation; Western Caroline Islands operation; Leyte operation; Luzon operations; Iwo Jima operation; Okinawa operation; and THIRD Fleet operations against Japan.