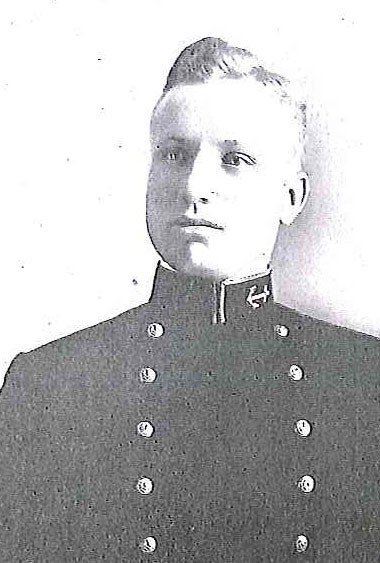 Rear Admiral Bennett was born in Goodland, Kansas, on December 1889, the son of Andrew Pierce Bennett and Mrs. Harriet Kirkpatrick Bennett. He attended high school in Portsmouth, Ohio, before entering the United States Naval Academy, Annapolis, Maryland, on appointment from Ohio in 1908. While a Midshipman he participated in class football, baseball, and tennis. Graduated with credit and commissioned Ensign to rank from June 8, 1912, he subsequently advanced to the rank of Rear Admiral on May 15, 1942.

Between his graduation in 1912, and October, 1914, he served in the battleships Michigan and Florida, and the cruiser Montana. He had instruction in submarines in the submarine tender Tonopah from November 1914 until March 1915, and has served the major part of his sea duty in submarines since the completion of that course. Prior to World War I he had command of the Submarine D-1, and in June, 1917, assumed command of the USS L-11, based at Bantry Bay, Ireland. He was awarded the Navy Cross for services in that command. The citation follows:

“For distinguished service in the line of his profession in command of the USS AL-11. While enroute from Newport to the Azores his submarine was separated from the escort and other submarines of the squadron, leaving him without a rendezvous. He thereupon proceeded to his destination successfully, assuming the great responsibility of starting a 1700 mile Atlantic Ocean run in winter weather in a submarine of a class that had never been considered reliable for service of this character.”

Rear Admiral Bennett had instruction at the Periscope School, Portsmouth, England, in September, 1918. During the four years following his return to the United States in the fall of 1918, he fitted out and commanded the submarines R-24 and S-16. In September 1922 he reported as Aide on the Staff of Commander, Pacific Submarine flotillas. He had a tour of shore duty in the Puget Sound Navy Yard, Bremerton, Washington, from September 1923 until December 1925, when he was detached to duty in connection with fitting out the submarine tender Holland in that yard. He joined her when she was commissioned on June 1, 1926, and served as her Engineer and Repair Officer until September 1927.

Following command of Submarine Division 18, Submarine Divisions, Battle Fleet, from September 1927 until June 1929, he had a tour of duty in the Division of Fleet Training, Office of the Chief of Naval Operations, Navy Department, Washington, DC, from August 1929 until June 1931. Again ordered to sea duty, he served as Engineer Officer of the battleship Texas for two years, and thereafter was an instructor in the Department of Electrical Engineering and Physics at the Naval Academy from June 1933 until May 1936.

Rear Admiral Bennett returned to duty in submarines in June 1936 when he proceeded to Asiatic Station in June 1936. He was designated Commander, Submarine Squadron Five with additional duty as Commander Submarine Division Ten, and served in that dual capacity from July 1936 until August 1938. While in that command, he was in charge of evacuation of the white population from Tsingtao, China, during the summer of 1937, and received a Letter of Commendation for that service. In 1938 he made a good will cruise with those submarine through the Netherlands East Indies, Sarawak, and Brunei, and received a Letter of Commendation for the excellence of the Intelligence Reports submitted on that cruise. He was also in charge of the search at sea for the China Clipper which was lost about 400 miles east of the Philippine Islands in 1938.

After service as Head of the Progress, Legislation, and Patents Section of the Bureau of Ordnance, Navy Department, Washington, DC, from October 1938 until July 1940, when he assumed command of the cruiser Savannah. He was serving in that command when the Japanese attacked Pearl Harbor on December 7, 1941, at which time the Savannah was undergoing post-repair trials in Casco Bay. She was soon dispatched to the West Indies, and still under the command of Rear Admiral (then Captain) Bennett, she made a cruise to South American ports.

In June 1942 he was ordered to duty at Headquarters, Commander in Chief, US Fleet, and in July of that year was assigned temporary additional duty with US Naval Forces in Europe, reporting via air to the British Isles, as Commander Advance Group Amphibious Force, US Atlantic Fleet, and further reporting to the Commanding General, US Army Forces in the European Theater. He was in the United Kingdom on that special duty when the African Campaign was planned and was assigned the task of organizing and manning the Mediterranean ports of Oran, Arzow and Mers El Kebir as supply centers for the Army. The US Naval parties for those tasks sailed with the assault convoy and landed in Africa on November 8, 1942, with the American Army Forces. For services in that assignment, he was awarded the Legion of Merit by the War Department, with citations as follows:

“For exceptionally meritorious conduct in the performance of outstanding services from September 1942 to January 1943. Having received orders to participate in the Oran landing operation only three weeks prior to the first scheduled sailing date of the assault convoy, Admiral Bennett, with great iniative – and energy, organized and trained an Advanced Base, United States Naval Unit, for duty with the Center Task Force. Through unremitting effort and ingenuity his command was made ready, fully equipped, in the time allotted. Due to his foresight and planning salvage personnel and material were on hand immediately after the landing on 8 November 1942 for the extremely difficult task of clearing the ports of Oran, Mers El Kebir and Arzew. Despite the difficulties he faced, particularly at the port of Oran which had been badly sabotaged by the sinking of twenty-six ships, Admiral Bennett and his Naval Port Party, assisted by the Army, rapidly prepared all three ports to handle from two to three times their normal peacetime capacities.”

Rear Admiral Bennett continued in command of these Mediterranean ports until February 1943, when he was assigned command of the Naval Operating Base, Iceland. Returning to the United States in June of that year, he reported to the Bureau of Naval Personnel, Navy Department, Washington, DC, and after brief duty at the Gulf Sea Frontier, Miami, Florida, assumed duty as Commandant, Eighth Naval District, New Orleans, Louisiana, on June 14, 1943. For meritorious service in that assignment he was awarded the Gold Star in lieu of a Second Legion of Merit, with the following citation:

Gold Star in lieu of Second Legion of Merit

“For exceptionally meritorious conduct in the performance of outstanding services to the Government of the United States as Commandant of the Eighth Naval District, from June 1943, to August 1945. Exercising judgment, foresight and resourcefulness in discharging the responsibilities of this important assignment, Rear Admiral Bennett effectively coordinated and administered the extensive Naval activities in the large land area of the Eighth Naval District, attaining a high level of efficiency in his command which contributed materially to the successful prosecution of the war. His leadership and executive ability throughout this period reflect the highest credit upon Rear Admiral Bennett and the United States Naval Service.”

Detached from command of the Eighth Naval District in December 1945, Rear Admiral Bennett reported for duty in command of Cruiser Division One, Pacific Fleet. On May 8, 1946, he was relieved of that command and ordered to temporary duty at Headquarters, Eleventh Naval District, San Diego, California. He was later relieved of active duty, pending retirement, and on November 1, 1946, was transferred to the Retired List of the Navy.

In addition to the Navy Cross, the Legion of Merit and Gold Star in lieu of a Second Legion of Merit, Rear Admiral Bennett has the Mexican Service Medal (USS Florida), the Victory Medal, Submarine Clasp (USS L-11), and the China Service Medal (USS Canopus), and is entitled to the American Defense Service Medal with Bronze “A” for service in the USS Savannah, operating in actual or potential belligerent contact with the Axis Forces in the Atlantic Ocean between September 23 and November 23, 1941; the European-African-Middle Eastern Area Campaign Medal; the American Area Campaign Medal; and the World War II Victory Medal.