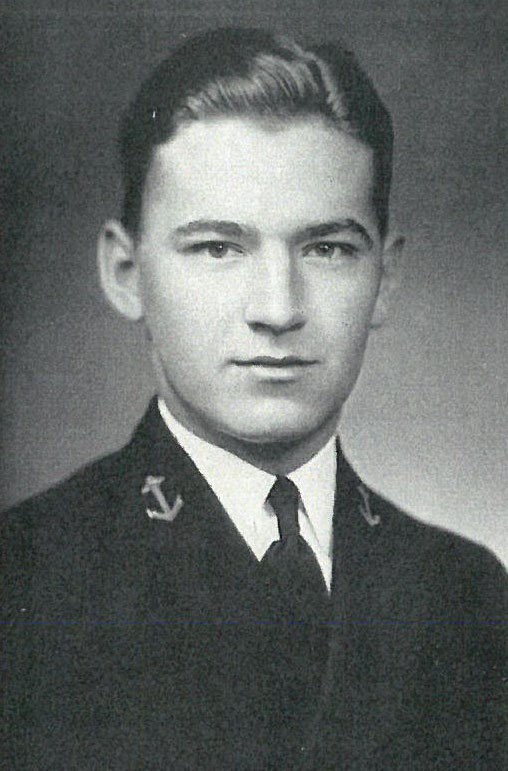 Fred Edward Bakutis was born in Brockton, Massachusetts, on November 4, 1912, son of Frank and Anna Bakutis. He attended Brookton public schools and after graduation from High School there in 1930 was appointed to the US Naval Academy, Annapolis, Maryland, which he entered on June 16, 1931. As a Midshipman he was Captain of the Track Team 1935, was a member of that team for three years, and for two years played with the N. A. Ten, dance orchestra. Graduated and commissioned Ensign in the US Navy on June 6, 1935, he subsequently progressed in rank to that of Rear Admiral, to date from January 1, 1963.

After graduation in June 1935, he was assigned to the cruiser USS Chester, in which he served as a junior officer, later Division Officer, until January 1, 1938. He then reported to the Naval Air Station, Pensacola, Florida, where he completed flight training and was designated Naval Aviator on January 10, 1939. Detached in March that year, he reported a month later to Scouting Squadron 3, based on USS Saratoga. In September 1941 he returned to Annapolis for instruction in Aeronautical Engineering at the Naval Postgraduate School, but at the outbreak of World War II he was ordered to the Naval Aircraft Factory, Philadelphia, Pennsylvania, where he served as Inspector of Arresting Gear and Catapults from March until September 1942.

In October 1942 he joined Fighting Squadron 16, based on USS Lexington, and had duty for a year as Executive Officer of that squadron of F6F Hellcats. In October 1942 he assumed command of a similar squadron, VF-20, based on USS Enterprise, which with her Air Groups won the Presidential Unit Citation for heroic service in the Pacific Combat area. Remaining in command of that squadron until February 1945, he served the remaining months of hostilities in the Navy Department, Washington, DC, attached to the Office of the Chief of Naval Operations (VF Military Requirements Desk) and the Bureau of Aeronautics.

During the war he participated in strikes on the Bonis, Yap, Palau, the Philippines, Formosa and Okinawa; was shot down by a Jap destroyer which he was attacking in an F6F, was adrift for seven days in a raft in the Sulu Sea; and was picked up by the submarine Hardhead, transferred to USS Angler and taken to Perth, Australia. A Navy Ace, he is credited with twelve planes shot down and much damage to shipping, grounded aircraft and installations. He was awarded the Navy Cross, Legion of Merit with Combat “V,” Distinguished Flying Cross with Gold Star in lieu of a second, the Bronze Star Medal with Combat “V,” and the Air Medal and six Gold Stars in lieu of additional awards. Available citations follow:

Navy Cross: “For extraordinary heroism as Pilot of Fighter Plane and Commanding Officer of Fighting Squadron TWENTY, attached to the USS Enterprise, during operating against enemy Japanese forces in the Battle for Leyte Gulf on October 24, 1944. Aggressively leading a small search group on a strike against an enemy task force, Commander Bakutis succeeded in locating the concentration of hostile vessels and immediately reported the location to his base. Then, launching a brilliant attack on the Japanese ships, he fought his plane gallantly in the face of a withering barrage of accurate antiaircraft fire and gunfire from the enemy’s main batteries, personally scoring direct hits with his rockets on a battleship and contributing in large measure to the damaging of one cruiser and two other battleships during this fierce action…”

Legion of Merit: “For exceptionally meritorious conduct in the performance of outstanding services…as Pilot of a Fighter Plane, attached to USS Lexington in operations against enemy Japanese forces, in the Bonin Islands, August 31, 1944, in the Palau Islands, September 10, 1944, in the Nansei Shoto Area, October 10, 1944, in the Philippine Islands Area, October 18 and December 14 and 15, 1944. Executing his attacks with skill and courage, Commander Bakutis destroyed 11 and damaged 11 enemy aircraft on the ground; destroyed two small vessels and damaged a freighter and a medium cargo ship with well directed rocket hits; and assisted in sinking or damaging seven small vessels…”

Bronze Star Medal; “For meritorious service as Commanding Officer of Fighting Squadron TWENTY attached to the USS Lexington operating against enemy Japanese forces in the Pacific Area. Commissioning his squadron with 45 pilots on October 15, 1943, Lieutenant Commander Bakutis imbued in the personnel under his command his own indomitable spirit of aggressiveness and rapidly developed a fighting team characterized by exceptional air discipline, courage and combat skill. Maintaining a smoothly coordinating organization as the complement more than doubled, he constantly drilled his pilots in fundamentals as well as advanced and changing tactics as existing conditions varied. His inspiring leadership and tireless efforts were determining factors in the splendid record achieved by his squadron…”

Air Medal; “For meritorious achievement in aerial flight as a Pilot and Commanding Officer of Fighting Squadron TWENTY, operating from the USS Lexington during action against enemy Japanese forces over Formosa, January 15, 1945. Leading a daring fighting sweep despite extremely adverse weather conditions, (he) sighted a Japanese fighter plane at low altitude and immediately started pursuit. Holding grimly to his target at high speed and through cloud cover, he finally succeeded in shooting the hostile fighter down in flames ten feet above the water as the Japanese pilot was reaching the safety of Formosa…”

Gold Star in lieu of the Second Air Medal; “For meritorious achievement…during action against enemy Japanese forces in the Pacific Area, January 20, 1945. Engaged in combat air patrol over the Task Force, Commander Bakutis was vectored to intercept a hostile snooper and immediately climbed to 23,000 feet to engage the Japanese pilot, pressing home his attack with fierce determination and, with the assistance of his wingman, shooting the enemy down in flames within sight of the Task Force. His intrepid fighting spirit and unwavering devotion to duty were in keeping with the highest traditions of the United States Naval Service.”

Completing his post-war tour of duty in the Navy Department in June 1947, he was ordered next to USS Tarawa, for duty as Group Commander, Carrier Air Group ONE, and during the period June 1948 to February 1949 he commanded Carrier Air Group FIVE of USS Valley Forge. Four months’ duty as Training Officer on the Staff of Commander Fleet Air, West Coast and Commander Air Force, Pacific, was followed by his assignment to the Naval War College, Newport, Rhode Island, where he was a student for one year and served on the Staff for two years. In June 1952 he rejoined the USS Valley Forge to serve as that carrier’s Executive Officer. As such he participated in combat in Korean waters and was awarded a Gold Star in lieu of the Second Bronze Star Medal for “meritorious service in Korea from 31 December 1952 to 5 June 1953…” The Combat Distinguishing Device was authorized for this medal also.

He is also entitled to the Ribbon for and a facsimile of the Navy Unit Commendation awarded the USS Valley Forge.

From June 1953 until June 1955 he again served on the Staff of Commander Air Force, Pacific, as Air Training and Readiness Officer, after which he was assigned to the Office of the Deputy Chief of Naval Operations (Air) for duty in connection with Aircraft Programs. In August 1956 he assumed command of USS Gardiners Bay (AVP-39), then served successively in 1957-1959 as a member of the Staff of the Commander in Chief, US Pacific Fleet, and Commanding Officer of USS Hancock (CVA-19). In December 1960, he was again assigned to the Office of the Chief of Naval Operations, Navy Department, where he had duty as Assistant Director of the Fleet Operations Division.

On July 20, 1961, he was assigned as Deputy Chief, Joint Alternate Command Element in the organization of the Joint Chiefs of Staff at Fort Ritchie, Maryland. In March 1962 he became Commander Alaskan Sea Frontier, with additional duty as Commandant of the Seventeenth Naval District, Headquarters in Kodiak, Alaska. On September 1, 1962, he assumed further additional duty as Commander Fleet Air, Alaska/Commander Naval Air Bases, Seventeenth Naval District.

He assumed command of Anti-Submarine War Group ONE at Long Beach, California, on March 28, 1964, where he served until March 29, 1965. In ceremonies at the US Navy Yard Annex, Washington, DC, he assumed command of the US Naval Support Force, Antarctica on April 27, 1965 and in April 1967 he was detached to serve as Commander Fleet Air, Alameda, with headquarters at the Naval Air Station, Alameda, California. In March 1968 he reported as Commander of the Hawaiian Sea Frontier/Commandant of the Fourteenth Naval District, with additional duty as Commander Fleet Air, Hawaii.