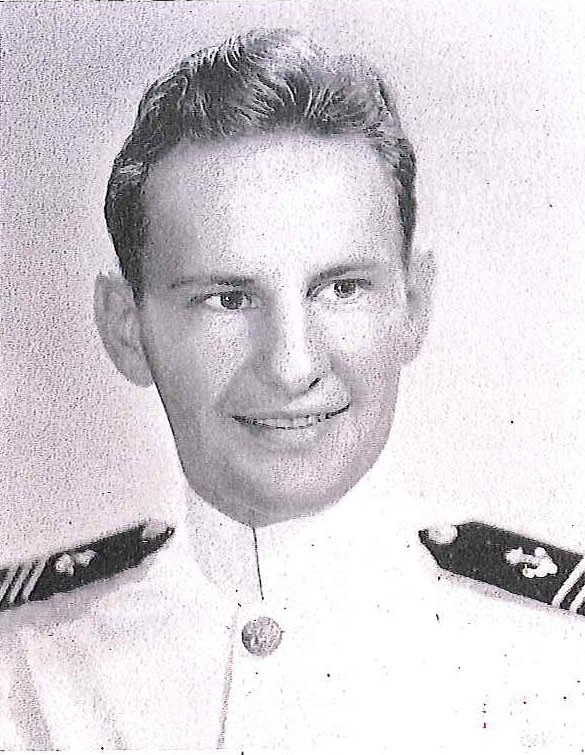 William Charles Bergstedt was born in Detroit, Michigan, on March 6, 1921, son of David H. and Irene Marie (Dreis) Bergstedt. He attended Melvindale (Michigan) High School and Wayne University in Detroit, prior to entering the US Naval Academy, Annapolis, Maryland, on appointment from his native state in 1940. Graduated and commissioned Ensign with the Class of 1944 on June 9, 1943 (course of instruction reduced to three years due to World War II), he subsequently advanced in rank to that of Captain, to date from September 1, 1963.

In July 1949 he reported for instruction in aeronautical engineering at the Naval Postgraduate School, Annapolis, Maryland, from which he received the degree of Bachelor of Science in June 1951. He next attended a course in industrial management at the University of Minnesota at Minneapolis, and from September 1951 to June 1952 was a graduate student at the University of Michigan at Ann Arbor, from which he received the degree of Master of Science in June 1952. Having been designated Aviation Engineering Duty Officer on April 1, 1952, he was assigned in July that year as Aeronautical Engineering Officer in the Office of the Bureau of Aeronautics Representative, San Diego, California.

He served a Maintenance Officer with All Weather Attack Squadron THIRTY-THREE, during the period July 1955 to June 1957, after which he had duty as Aeronautical Engineering Officer at the Naval Air Station, North Island, San Diego, California. In February 1960 he joined Heavy Attack Wing ONE as Aircraft/Material Officer and in June 1963 reported for brief instruction at the Defense Language Institute. In September that year was assigned to the Scientific and Technical Intelligence Center Unit in the Office of the Commander in Chief, US Naval Forces, Europe Representative, Germany, with headquarters in Frankfurt. He remained there until August 1965, when he became Head of the Military Personnel Division, Bureau of Naval Weapons, Navy Department, Washington, DC. Upon the reorganization of the Navy Department, effective May 1, 1966, he now serves as Director of the Organization and Manpower Management Office, Naval Air Systems Command Headquarters, Washington, DC.

Captain Bergstedt is a member of the Institute of Aeronautical Sciences.