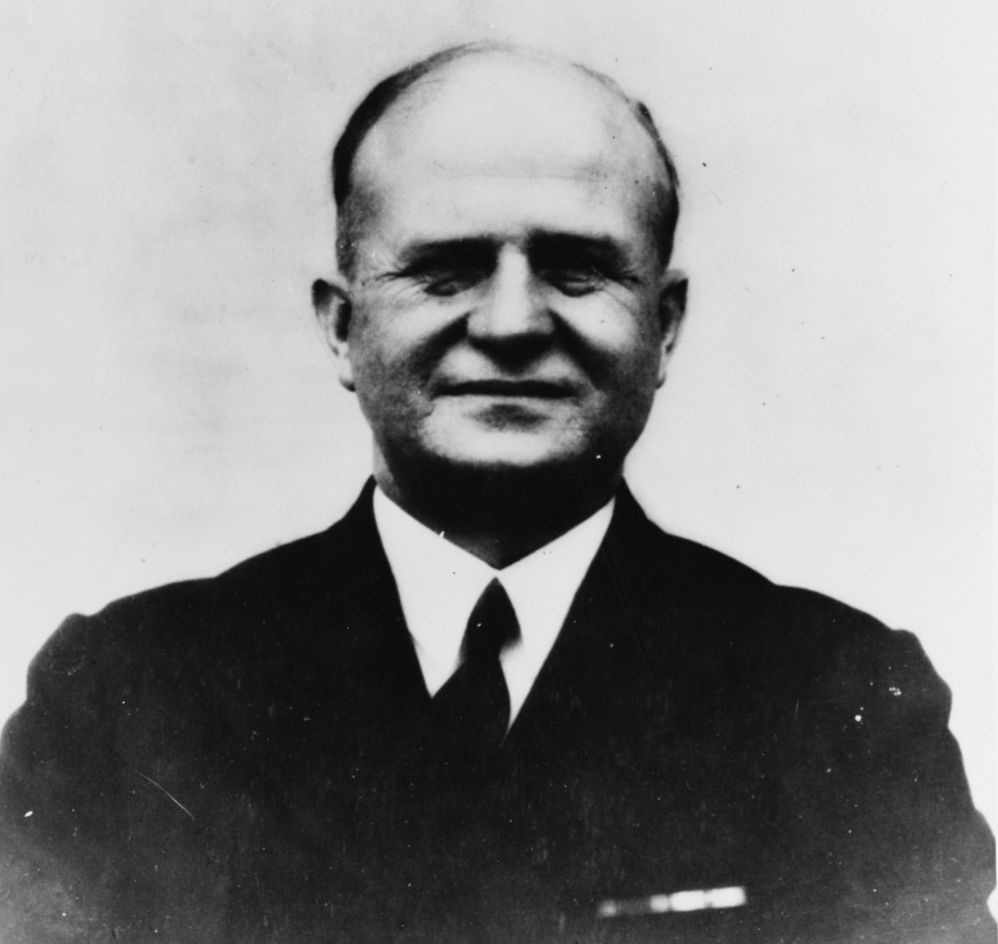 William Lowndes Calhoun was born in Palatka, Florida, on 13 July 1884, son of Benjamin Putnam and Julia Catherine (Peterman) Calhoun. He attended Palatka High School, and was appointed to the US Naval Academy, Annapolis, Maryland, from his native state in 1902. As a Midshipman he was a member of the Rifle Team. Graduated on 12 February 1906, he served the two years at sea, then required by law, and was commissioned on 12 February 1908. He subsequently advanced to the rank of Vice Admiral to date from 27 February 1942, and was transferred to the Retired List of the US Navy in that rank on 1 December 1946. On 14 January 1954, at Coronado, California, Fleet Admiral Chester W. Nimitz, USN, delivered Admiral Calhoun a commission dated 7 August 1947, promoting him to Admiral on the Retired List.

Ordered first to the USS Chattanooga, on Asiatic Station, he remained aboard until November 1908, then reported to the Commander in Chief, Atlantic Fleet, for duty in the USS New Jersey. In May 1909 he was ordered to Puget Sound, Washington, to join the USS Maryland, and served on board that armored cruiser until 1913, as Gunnery Officer for eighteen months, and for one month as Chief Engineer as additional duty. During that period the Maryland won the Gunnery Trophy and Battle Efficiency Pennant. In July 1913 he reported as Inspector of Ordnance of the Connecticut District, Watervliet Arsenal, West Troy, New York, and Lake Torpedo Boat Company, Bridgeport, Connecticut; and in December 1914 was assigned additional duty as Inspector-Instructor of Naval Militia, Bridgeport and South Norwalk.

From August 1915 until December of that year he had instruction in submarines on board the USS Columbia, USS Tonopah and USS Cheyenne, and qualified for command of submarines. He was then ordered to Long Beach, California, to fit out the USS L-7, as Prospective Commanding Officer. When so assigned he had additional duty as Inspector of Machinery and Ordnance at Craig Shipbuilding Company, Long Beach, California, and Works of Hall Scott Motor Company, West Berkeley, California. As additional duty he also commanded the USS Farragut, was Inspector-Instructor of Naval Militia at Los Angeles and Santa Barbara, and in June 1917 served as Acting Inspector of Machinery, Works of the California Shipbuilding at Long Beach, and as a member of the Joint Merchant Vessel Board, Twelfth Naval District Section, in San Francisco.

Detached from the USS L-7 on 6 December 1917, the day before she was placed in commission, he became Commander, Submarine Force Division ONE, US Atlantic Fleet, later designated Commander Submarine Flotilla ONE, Atlantic. In December 1918, after the Armistice, he was assigned additional duty as Commander Submarine Base and Naval Air Station, Coco Solo, Canal Zone. He assumed command when that base was commissioned in 1919, and that year was awarded the Victory Medal with Submarine Clasp. In April 1919 he had temporary duty with the Cruiser Force, US Fleet, and in May joined the USS Mississippi, in which he served as Gunnery Officer until December 1920. The Mississippi won the highest individual ship gunnery honors for the years 1919-1920.

In February 1921 he reported for duty in connection with fitting out the USS California as that battleship's Prospective Gunnery Officer. Before she was commissioned, however, he was assigned duty as Naval Inspector of Ordnance in Charge, Naval Ammunition Depot, Mare Island, California, where he served from April 1921 to July 1923. He then assumed command of the USS Young, and was serving as her Commanding Officer when that destroyer went aground at Point Honda, California, on 8 September 1923. The ensuing Court of Inquiry and General Court Martial rendered a verdict of "Fully acquitted."

He was awarded a Letter of Commendation by the Secretary of the Navy which included the following statement: "His coolness, intelligence and seaman-like ability shown after the vessel under his command stranded, was the outstanding feature of the disaster. Every member of the crew who reached the beach owed his life to Commander Calhoun."

In December 1923, following temporary duty in the USS Melville, he reported to the battleship Maryland, commissioned in 1921. He served as her Navigator until June 1925, when he was detached at Honolulu, T.H., then returned to the United States for a second tour of duty as Naval Inspector of Ordnance in Charge, Naval Ammunition Depot, Mare Island. He next served as Commander Division 31, Destroyer Divisions, Battle Fleet, his pennant in the USS Farragut. That Division won the Battle Efficiency Pennant in 1928, and for continued battle efficiency attained while he was in command, June 1927 to June 1929, he received Letters of Commendation from President Calvin Coolidge and Secretary of the Navy Curtis D. Wilbur.

Completing the senior course at the Naval War College, Newport, Rhode Island, in May 1930, he served from June of that year until February 1932 as Head of the Department of Navigation at the Naval Academy. He then returned to sea as Commanding Officer of the USS Rochester, and from July 1933 until July 1934 served as Chief of Staff to Commander Base Force, US Fleet, reporting to Headquarters, Eleventh Naval District, San Diego, California, for his next tour of duty. On 5 June 1937, he assumed command of the USS California, which he had assisted in fitting out in 1921. He remained in that command until January 1938, when he was designated Chief of Staff and Aide to Commander Battleships, Battle Force. In November 1938 he was commissioned Rear Admiral.

He attended the advanced course at the Naval War College for six months, and on 27 December 1939, became Commander Base Force, US Fleet, redesignated Base Force, Pacific Fleet, in February 1941. From August of that year until February 1942 he had additional duty as Commander Train Squadron 2. On 27 February 1942, he became Commander Service Force, US Pacific Fleet, with the accompanying rank of Vice Admiral, and served in that capacity until March 1945. He was awarded the Distinguished Service Medal and the Legion of Merit, with citations, in part, to follow:

Distinguished Service Medal: "For exceptionally meritorious service...as Commander Base Force and Commander Service Force, US Pacific Fleet, in connection with operations against the enemy in the Pacific War Area from December 1939 to February 1945. Charged with logistical support of the Pacific Fleet and Naval shore-based establishments in the Pacific Ocean Area, (he) applied keen intelligence and resourceful initiative to the complexities of his assignment and, working with tireless energy, planned and organized a greatly enlarged service of supply which enabled him to provide personnel, provisions, fuel and ammunition for all fleet operations and thereby accommodate the vital needs of our constantly increasing Naval forces in this strategic theater of war with remarkable expediency..."

Legion of Merit: "For exceptionally meritorious conduct...while attached temporarily to the Staff of Commander South Pacific, during the period 18 October to December 1942...(He) was instrumental in initiating and establishing the logistic supply system for the South Pacific Forces...in the face of most difficult transportation problems and concurrent combat reactions..."

From 6 March to October 1945 he served as Commander, South Pacific Force and Area, and was awarded a Gold Star in lieu of the Second Legion of Merit for outstanding services and skill in the performance of his duties. The citation states that he was "instrumental in promptly initiating and administering efficient measures for moving personnel and supplies forward from the South Pacific Area into the more advanced combat areas...resulting in the acceleration of the campaign in the Central Pacific..."

Returning to the United States in October 1945, he had temporary duty in the Office of the Inspector General, Navy Department, and in February 1946 reported to Commander Western Sea Frontier for duty as General Inspector for that area. In April 1946 he was ordered relieved of all active duty and, following a period of leave, was transferred to the Retired List after forty-four years of active Naval Service. On 14 January 1954, he was given the combat promotion to Admiral, USN, Retired, his commission dated 7 August 1947. Fleet Admiral C.W. Nimitz flew from Berkeley to Coronado to make personal delivery of this commission at the Naval Air Station, San Diego.

Admiral Calhoun is a great grandson of Mr. John Caldwell Calhoun, Vice President of the United States, from South Carolina (1782). He was married on 10 February 1946 to Miss Rosalio Oneschuk of Milford, Massachusetts, Ex-First Lieutenant, Army Nurse Corps. Mrs. Calhoun served from June 1943 to August 1945 in the South Pacific Force, at 8th Army General Hospital, Dumbea, New Caledonia. They had two sons and a daughter. He had two sons by a former marriage.