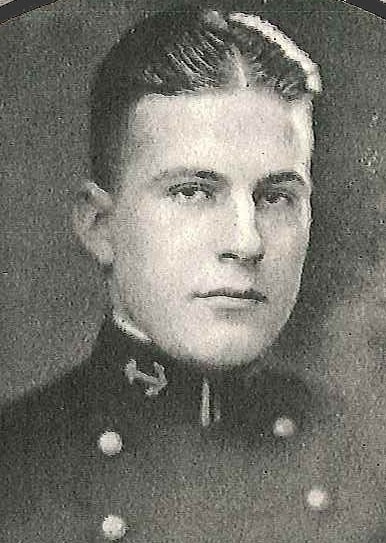 Wells Laflin Field, son of the late Rear Admiral W.L. Field, USN and Mrs. Field (Ruth Dunning Clark), now residing in Bennington, Vt., was born in Bennington on October 14, 1902. He attained Friends School in Washington, DC, Hill School of Pottstown, Pa., Severn School in Severna Park, Md., and entered the United States Naval Academy in Annapolis in 1919. Upon graduating in 1923 he was commissioned Ensign and subsequently advanced in rank to that of Captain as of May 1, 1943.

After his graduation in 1923 he was detached from the Naval Academy, and assigned to the Naval Gun Factory, Indian Head, Md. Until the next September. He then joined the USS Arkansas as Junior Watch and Division Officer, having detached duty from July, 1924 to January, 1924 to attend the Naval Torpedo School, Newport, R.I. Detached from the Arkansas in November, 1925, he attended the course in chemical warfare at Edgewood Arsenal, Maryland, before reporting in January, 1926 aboard the battleship Mississippi. In April, 1927 he transferred back to the Arkansas and served a two year tour followed by a year as Gunnery and Executive Officer aboard the destroyer Brooks.

In June, 1930 he was ordered to the Naval Academy for duty as Instructor in the Department of Electrical Engineering and Physics. For three years, June, 1932-35, he served successively as Chief Engineering and Navigator of the USS Bridge, a unit of Train Squadron1, Base Force, at New York, later at San Diego, California.

He was then assigned to Yale University, New Haven, Conn., as an Instructor of the NROTC, and served from June, 1935-1937. The next six months he was Executive Officer of the USS Worden (DD-357), and thereafter until July, 1940 he served as Gunnery and Operations Officer on the staff of Commander Destroyer Squadron 9. He returned to shore duty as Executive Officer of the NROTC at University of Michigan, at Ann Arbor, and after a year he transferred in the same duty to Rensselaer Polytechnic Institute, Troy, NY.

After the United States entered the World War, he was assigned in January, 1942, as First Lieutenant and Damage Control Officer aboard the USS Massachusetts, and during the year he served in that duty the Massachusetts engaged French forces at Casablanca (November 8, 1942). He was ordered to the Pacific Fleet, and joined the USS Boston, serving as her Executive Officer from January, 1943 to May, 1944, during engagements in the Marshall Islands area, and Palau and Hollandia raids.

The year July, 1944-1945, he was Commanding Officer of the USS Bolivar, transport, which served in operations at Guam, Leyte, Lingayen Gulf, and Iwo Jima. Upon returning to the United States, he was ordered to the Naval Academy for duty as Head of the Electrical Engineering and Physics Department, and served from July, 1945 to June, 1948.

He commanded the heavy cruiser Saint Paul from August, 1948 to June, 1949, followed by duty as Chief of Staff to Commander Service Force, Atlantic Flee. In February, 1951, when detached from staff duty, he reported in the Navy Department, Office of the Chief of Naval Operations, for duty as Director, Naval Reserve Plans and Policy Branch.

Captain Field is a member of the Army-Navy Club, Washington, DC and the US Naval Institute, Annapolis, Maryland.