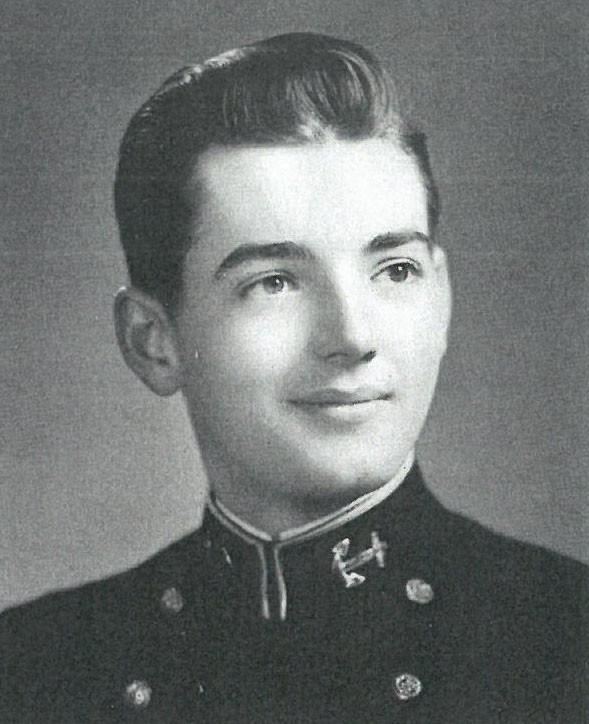 Robert Bemus Baldwin was born on April 24, 1923, in Minneapolis, Minnesota, son of Dr. William P. Baldwin and Nell P. Baldwin, both now deceased. Following the death of his parents when he was a child, he was raised by Dr. and Mrs. William H. Long in Fargo, North Dakota. He entered the US Naval Academy in 1941 on appointment from the State of North Dakota and was graduated on June 7, 1944 with the class of 1945 (course accelerated during World War II). He advanced in rank to that of Rear Admiral, to date from August 1, 1969 and Vice Admiral to date from June 1, 1973.

After receiving his commission in June 1944, he joined USS Birmingham and “for heroic achievement as Officer-in-Charge of a Repair Party on board the USS Birmingham in action against enemy Japanese forces in the vicinity of the Nansei Shoto on May 4, 1945…” he was awarded the Bronze Star Medal with Combat “V.” The citation continues in part: “Although wounded when his ship was struck by a hostile plane and bomb, he unhesitatingly donned a breathing mask and rushed to the scene of the explosion on the third deck. Despite the great personal danger involved, he remained at the scene of the damage to furnish the damage control officer with accurate information which aided greatly in restricting the damage sustained…” He was also awarded the Purple Heart Medal for wounds received in enemy action on May 4, 1945.

Following World War II, he had flight training at Naval Air Stations, Dallas, Corpus Christi, Pensacola, and was designated a Naval Aviator on September 28, 1947. He was assigned to Attack Squadron FORTY-FOUR until May 1949, then served with Composite Squadrons FIVE and SIX. Composite Squadron FIVE was the Navy’s first operational special weapons squadron.

In January 1952 he began Test Pilot training at the Naval Air Test Center, Patuxent River, Maryland, and after completing training became a Test Pilot there. He also served as an instructor at the Navy’s Test Pilot School. He was Team Leader for the FJ-3 Fury jet fighter in Composite Squadron THREE from June 1954 to September 1956 giving traning to fleet squadron pilots transitioning to this aircraft. Following this tour, he served as Executive Officer and Commanding Officer of Fighter Squadron ONE HUNDRED FIFTY-FOUR, the first Pacific Fleet squadron to deploy with the F6 Crusader jet fighter. The squadron was in the Western Pacific during the Taiwan Straits crisis in 1958. In December 1958 he was assigned to the Bureau of Naval Personnel, Navy Department, Washington, DC, where he had duty in connection with Officer promotion plans.

In 1961 he assumed command of Fighter Squadron FIFTY-ONE, again flying Crusaders from the carrier Ticonderoga. Following this assignment, he became Commander, Carrier Air Group SIXTEEN in February 1963. During 1963 and 1964 he participated in operations off South Vietnam, flying from Oriskany.

He returned to the Bureau of Personnel in February 1964 as Executive Assistant to the Chief of Naval Personnel. In May 1966, he became Commanding Officer of USS Chipola (AO-63), deployed in the Vietnam area. In September 1967 he assumed command of USS Forrestal (CVA-59) and in February 1969 was ordered detached for duty as Director of the Aviation Programs Division, Office of the Chief of Naval Operations, Navy Department. In June 1970 became Director, Aviation Plans and Requirement Division. He took command of Carrier Division SIX in January 1971. In July 1972 he assumed duties as Deputy Chief of Naval Personnel, Navy Department. On May 31, 1973 he was promoted to the rank of Vice Admiral and assumed his present duties as the Commander Naval Air Force, US Pacific Fleet.