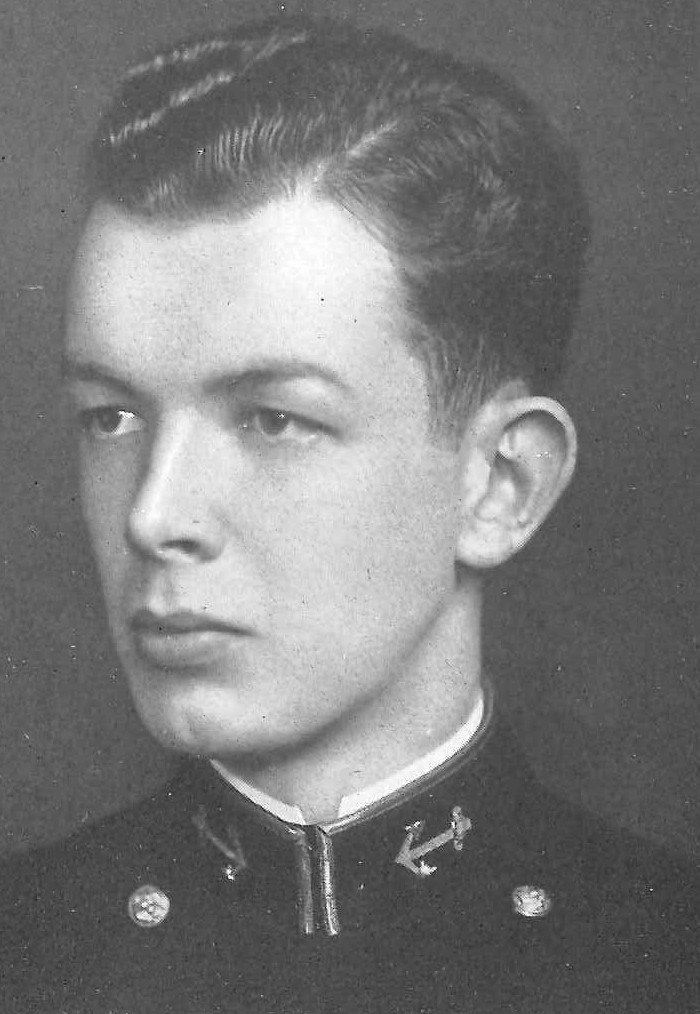 Frederic Abshire Bardhsar was born in Seattle, Washington, on October 20, 1915, the son of Deyo Edward Bardshar and the late Mrs. Sybil Abshire Bardshar.  He attended Broadway High School in Seattle and entered H.T. Bone of Washington in 1934.  Graduated with the degree of Bachelor of Science and commissioned Ensign in the US Navy on June 2, 1938, he subsequently advanced in rank to that of Vice Admiral, to date from February 18, 1970.

Following graduation from the Naval Academy in June 1938, he was assigned to the USS Pennsylvania, and served as a junior officer on board that battleship until July 1942, after the United States entered World War II.  He then reported to the Naval Reserve Aviation Base, New Orleans, Louisiana, for pre-flight training, and had flight training at the Naval Air Station, Pensacola, Florida, from October 1942 until April 1943, being designated a Naval Aviator there.  He then served as an instructor (VS-3) at the Naval Air Station, Daytona Beach, Florida, and in October of the same year joined Fighting Squadron TWENTY-SEVEN, then attached to the USS Princeton.

For outstanding service while Executive Officer, later Commanding Officer of Fighting Squadron TWENTY-SEVEN and Commander Air Group TWENTY-SEVEN during the period October 1943 to October 1945, he was awarded the Silver Star Medal, Legion of Merit with Combat “V,” Distinguished Flying Cross and Gold Stars in lieu of the second and third DFC, and the Air Medal and Silver Star in lieu of five additional Air Medals.  These were awarded for outstanding service during the first aid raid on Manila; First Battle of the Philippine Sea; operations against the enemy in the vicinity of the Marianas, Palau, Ryukyu and Philippine Islands and air strike against Japanese shipping in the Calamian Islands.

After his return to the United States in November 1945, he reported to the Naval Air Station, Alameda, California, where he served as Inspection Officer until June 1947.  He was a student at the Naval War College, Newport, Rhode Island, during the next nine months, then from June 1948 until January 1951 was Executive Officer, later Commanding Officer of Air Transport Squadron THIRTY-TWO.  When detached he reported to the Naval Air Test Center, Patuxent River, Maryland.  He is a graduate of the Test Pilot School at Patuxent and served for two years as Director of the Service Test Division of the Naval Air Test Center.

In August 1953 he joined the USS Leyte as Operations Officer and, remaining at sea, served from December 1954 until January 1956 as Operations Officer on the Staff of Commander Carrier Division SIX.  He then reported to the Navy Department, Washington, DC, for a tour of duty in the Office of the Chief of Naval Operations, as Assistant Chief, Special Weapons Plans.  Designated Assistant for Naval Matters to the Assistant Chief of Staff, Air, and Special Operations Division, at Supreme Headquarters, Allied Powers, Europe, he served in that capacity from April 1958 until September 1960.  From October of that year until January 1961 he was again assigned to the Office of the Chief of Naval Operations, this time as Assistant Chief, Plans Branch, Air Operations Division (Strategic Targeting).

In January 1961 he assumed command of the USS Pawcatuck (AO-108), and in September of that year reported as Plans and Operations Officer on the Staff of Commander SIXTH Fleet.  On November 9, 1963 he assumed command of the USS Constellation (CVA-64) and was awarded the Navy Commendation Medal “for meritorious service on August 4-5, 1964…during operations in the South China Sea…”  He is also entitled to the Ribbon for, and a facsimile of the Navy Unit Commendation awarded Task Group SEVENTY-SEVEN POINT SIX, of which of the USS Constellation was a unit.

Ordered detached from the Constellation, he reported in January 1965 as Chief of the Requirements and Development Division, J-5, The Joint Staff Office, Joint Chiefs of Staff, Washington, DC.  “For exceptionally meritorious service from January 1965 through June 1967…” in that capacity, he was awarded a Gold Star in lieu of the Second Legion of Merit.

In April 1967 he assumed command of Carrier Division SEVEN and “for exceptionally meritorious service…(in that capacity) and Commander Task Group SEVENTY-SEVEN POINT SIX from April 22 to July 26, 1968 and subsequently as Commander Task Group SEVENTY-SEVEN POINT EIGHT until September 14, 1968…” he was awarded a Gold Star in lieu of the Third Legion of Merit.  In that assignment, he was responsible for planning, coordinating and executing combat air strike operations against the enemy in Southeast Asia.  In addition as Yankee Station Commander, he provided daily strike planning guidance to and direct tactical supervision over all air and surface units of Task Force SEVENTY-SEVEN assigned to special operations at Yankee Station.  He is entitled to the Ribbon for and a facsimile of the Navy Unit Commendation awarded the USS Ticonderoga.

In June 1969 he reported as Vice Director, J-3 (Operations), The Joint Staff Office, Joint Chiefs of Staff, Washington, DC, and was awarded a Gold Star in lieu of the Fourth Legion of Merit “for exceptionally meritorious service…from June 1969 through January 1970…”  In February 1970 he assumed command of Attack Carrier Striking Force, SEVENTH Fleet/Carrier Division FIVE and “for exceptionally meritorious service…during combat operations against enemy forces in Southeast Asia…” was awarded the Distinguished Service Medal.

He is a member of the Society of Experimental Test Pilots, the Fighter Aces of Association and the New York Yacht Club.