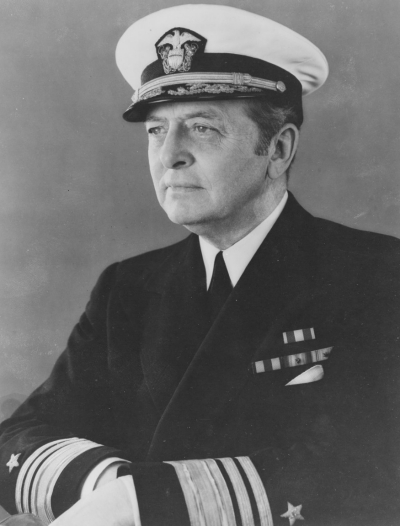 Vice Admiral Andrews was born in Galveston, Texas, 7 October 1879. During his first year at the University of Texas, he was appointed to the US Naval Academy, Annapolis, Maryland, from the Sixth District of Texas in September 1897. He was graduated from the Academy on 7 June 1901, and served the two years at sea then required by law before commissioning in the USS Maine operating with the Atlantic Fleet, and was commissioned Ensign on 7 June 1903. He was commissioned Lieutenant (junior grade) and Lieutenant, 7 June 1906, and advanced to Lieutenant Commander 1 July 1913. During World War I he was temporarily advanced to the ranks of Commander and later Captain, and was commissioned in these ranks in 1918 and 1923 respectively. He attained the rank of Rear Admiral 16 January 1934, and served in the rank of Vice Admiral from 13 July 1938, until 1 February 1941, and was appointed Vice Admiral, 1 May 1942. He was transferred to the Retired List of the Navy on 11 November 1943, in the rank of Vice Admiral. He died on 19 June 1948, at the Naval Hospital, Houston, Texas.

From June 1903 until February 1906 Vice Admiral Andrews served in the USS Dolphin the yacht assigned for the use of the Secretary of the Navy. He also had additional duty as aide at the White House. Upon completion of that duty he was ordered to Asiatic Station where he commanded the USS Villalobos until February 1908.

Returning to the United States, Vice Admiral Andrews served for eight months in the Navy Yard, New York, and for ten months at the Navy Recruiting Station, Dallas, Texas, before returning to sea as Executive Officer of the presidential yacht USS Mayflower from October 1910 to May 1911. During the following three years he was on duty at the US Naval Academy as aide to the Superintendent and Secretary to the Academic Board. After two months duty as gunnery officer of the USS Michigan and a year's duty as gunnery officer of the USS Utah, he reported to the New York Shipbuilding Company, Camden, New Jersey, for duty in connection with fitting out the USS Oklahoma and served as navigator of that battleship from her commissioning on 2 May 1916, until 27 October 1917.

Shortly after the United States entry into World War I, Vice Admiral Andrews reported to Newport News, Virginia, for duty in connection with fitting out the battleship Mississippi. He served as her executive officer from her commissioning on 17 December 1917, until September 1918, during which time the Mississippi operated with the Atlantic Fleet. In September 1918, Vice Admiral Andrews served as Naval Aide to Prince Axel of Denmark during the latter's stay in the United States. He then commanded the USS Massachusetts for a short time.

Vice Admiral Andrews was attached to the Third Naval District, New York, New York, for a year and on 1 December 1919, reported for instruction at the Naval War College, Newport, RI, where he graduated in 1920. He commanded the USS Prometheus from January 1920, until July 1921, when he was appointed Assistant Chief of Staff to the Commander in Chief, Atlantic Fleet. From December 1922 until April 1926 he was in command of the presidential yacht Mayflower and served as Naval Aide to the President of the United States. He accompanied President Harding to Alaska and after his death continued as senior Naval Aide to President Coolidge.

From May to November 1926, Vice Admiral Andrews was a member of the American Representation at the Geneva Preparatory Commission on Limitation of Armaments. Upon completion of that duty he was transferred to command the Submarine Base at New London, Connecticut. In 1927 he was again sent to Geneva as a member of the American Representation for the Conference on Limitation of Armaments.

Vice Admiral Andrews commanded the USS Texas from July 1929 until May 1931, and served as Chief of Staff, of the Naval War College, Newport, Rhode Island, for two years thereafter. He then served as Chief of Staff to Admiral Joseph M. Reeves, when with the rank of Vice Admiral he commanded the Battle Force, and when as Admiral he raised his flag in the USS Pennsylvania as Commander in Chief, US Fleet.

Vice Admiral Andrews served as Chief of the Bureau of Navigation, Navy Department, Washington, DC, with the rank of Rear Admiral, from 30 June 1935 until 11 June 1938. He then served as Commander, Scouting Force, with the accompanying rank of Vice Admiral, from 13 July 1938 until 1 February 1941, when he reverted to the rank of Rear Admiral. On 10 March 1941 he reported for duty as Commandant of the Third Naval District, New York, New York, and Commander of the North Atlantic Naval Coastal Frontier.

On 6 February 1942, Naval Coastal Frontiers were grouped in to Sea Frontiers. The area of the Naval Coastal Frontier formerly under Vice Admiral Andrew's command was merged into the Eastern Sea Frontier and he became its commander. In March 1942 he was relieved of duty as Commandant of the Third Naval District, continuing as Commander, Eastern Sea Frontier, with the rank of Vice Admiral. In this capacity he had the task of sweeping the stretch of the Atlantic between Nova Scotia and Florida free of enemy submarines. The submarine menace in this area ceased to be of dangerous proportions in the fall of 1942. For his services in this important command which extended to 1 November 1943, Vice Admiral Andrews was awarded the Distinguished Service Medal, with the following citation: 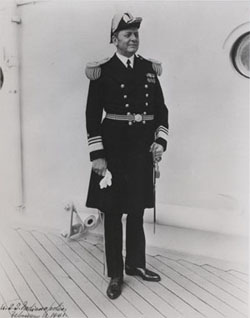 Distinguished Service Medal: "For exceptionally meritorious and distinguished service to the Government of the United States in a position of great responsibility as Commander Eastern Sea Frontier. During a period of intense enemy submarine activities, Vice Admiral Andrews displayed the highest qualities of leadership, judgment, and planning, and initiated and put into effect the anti-submarine organization of this Sea Frontier which proved to be highly effective in driving German submarines from our coastal waters and which became the model for the anti-submarine organization of other sea frontiers.

Vice Admiral Andrews was transferred to the Retired List of the Navy in the rank of Vice Admiral on 1 November 1943. He continued on active duty until the summer of 1945, serving in the Office of the Secretary of the Navy, Navy Department, as Chairman of the Navy Manpower Survey Board. In the summer of 1944 he was a member of the Board of Inquiry appointed to investigate the circumstances connected with the Japanese attack on Pearl Harbor.

In addition to the Distinguished Service Medal, Vice Admiral Andrews has the Spanish Campaign Medal; the Mexican Service Medal; the Victory Medal, Atlantic Fleet Clasp; the American Defense Service Medal; the American Area Campaign Medal; and the World War II Victory Medal. He also has the decoration and diploma awarded by the Government of Brazil for services as a member of the American delegation to Brazil on the occasion of the anniversary of Brazilian independence, and the decoration Order of Vasco Nunez de Balboa, grade of Commander, awarded him by the Government of Panama on the occasion of the visit of the US Fleet to Panama, 28 April to 2 May 1939.

Vice Admiral Andrew's was married and had one son, Adolphus Andrews, Jr., who was an officer in the US Marine Corps Reserve during World War II and had duty in the Pacific.