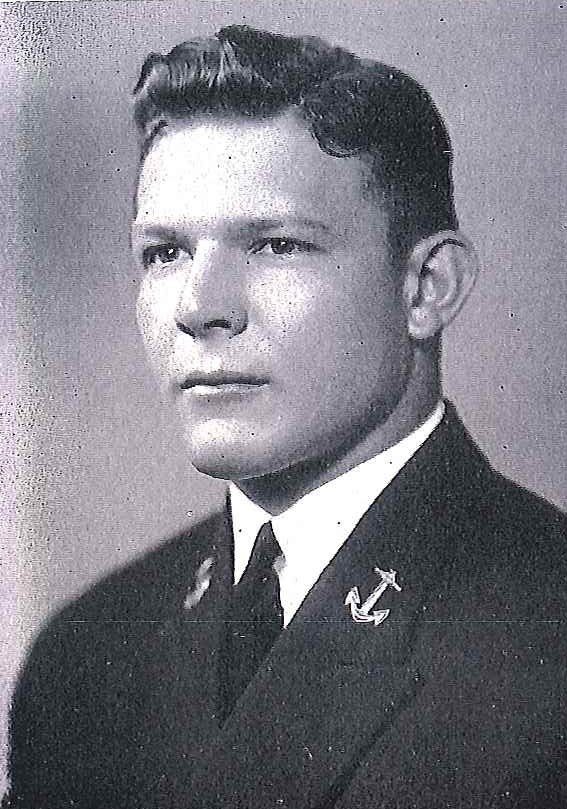 Allen Alfred Bergner was born in Kankakee, Illinois, on May 29, 1916, son of Alfred C. J. and Harriet (Hess) Bergner. He attended Kankakee High School; Onarga (Illinois) Military Academy; Northwestern University, Evanston, Illinois; and St. John’s College, Annapolis, Maryland, prior to entering the US Naval Academy at Annapolis, on appointment from his native state in 1936. As a Midshipman he was Captain of the Navy Football Team in 1939 and Captain of the Navy Wrestling Team in 1940. Graduated and commissioned Ensign on June 6, 1940, he subsequently advanced in rank to that of Rear Admiral, to date from December 1, 1967.

Following graduation from the Naval Academy in 1940, he joined USS West Virginia (BB-48) and was attached to that battleship, when she was sunk on December 7, 1941 as a result of the Japanese attack on Pearl Harbor, Territory of Hawaii. Later that month, he reported on board USS Tambor (SS-198) and for “meritorious conduct…in (that submarine) during her second war patrol in the Cape St. George and Buka areas from March 15 to May 12, 1942…” he was awarded the Navy Commendation Medal. During that patrol, a 7,000 ton tanker was sunk and extremely hazardous reconnaissance missions were accomplished.

In July 1943 he joined the Staff of Commander Submarine Division SIXTY-ONE as Engineer and in February 1944 became Executive Officer and Navigator on board USS Gar (SS-206).

For the Eleventh War Patrol of that submarine, he was awarded the Bronze Star Medal with Combat “V”, for assisting in the rescue of eight stranded airmen, three of whom were completely exhausted, off a reef in the vicinity of the Palau Island. He was also awarded the Navy and Marine Corps Medal for accomplishing the transfer, in a small rubber boat in heavily patrolled enemy waters, of an injured crewman to another submarine returning to port. In addition, he received the Navy Commendation Medal “for meritorious conduct…” on the Fourteenth War Patrol during which he assisted in the sinking of a 1,000 ton enemy ammunition laden craft.

He commanded USS S-47 (SS-148) from December 1944 to October 1945, when he transferred to command of USS Saury (SS-189). Detached from that submarine in June 1946, he next had instruction in Naval Engineering at the Postgraduate School, Annapolis, Maryland, and from June 1948 to June 1949 remained in Annapolis, to serve as an Instructor in the Department of Marine Engineering at the Naval Academy. Ordered to duty afloat, he was Executive Officer of USS Diodon (SS-349) until April 1950, when he became Commanding Officer of USS Pomodon (SS-486). During the period June 1952 to July 1954 he was an Instructor at the Armed Forces Staff College, Norfolk, Virginia, after which he was assigned as Operations Officer on the Staff of Commander Submarine Squadron SIX. In August 1955 he reported as Commander Submarine Division SIXTY-TWO.Between August 1956 and July 1958 he served as Prospective Commanding Officer Instructor and Assistant Officer in Charge, Submarine School, New London, Connecticut. Completing the course in Naval Warfare at the Naval War College, Newport, Rhode Island, in June 1959, he remained there as Planning Officer in the Command and Staff Department until June 1961. He commanded USS Orion (AS-18) until August 1962, after which he was Assistant Chief of Staff (Readiness) to Commander Antisubmarine Warfare, US Atlantic Fleet. In June 1964 he assumed command of Submarine Squadron SIX and in August 1965 reported as Director of the Liaison and Special Studies Division, Office of the Chief of Naval Operations, Navy Department, Washington, DC. In June 1967 he became Commander of the Naval Training Center, San Diego, California.

In October 1969 he assumed command of Service Group THREE and “for exceptionally meritorious service as Commander Task Force SEVENTY-THREE and Commander Service Group THREE from October 1969 to October 1970…” was awarded the Legion Merit. In November 1970 he became Assistant Chief of Naval Personnel for Education and Training, Navy Department. For his initiation and support of “…accelerated efforts in personnel research, task analysis and curricula review in order to provide Naval personnel with improved training at a reduced cost…” he was awarded a Gold Star in lieu of the Second Legion of Merit. In August 1971 he reported as Chief of Naval Technical Training, headquartered at Millington, Memphis, Tennessee, an Activity in the new training command organization. He served as such until relieved of active duty pending his retirement, effective July 1, 1972.

Rear Admiral Bergner is a member of Phi Kappa Psi. His hobbies are cabinet making and furniture refinishing.