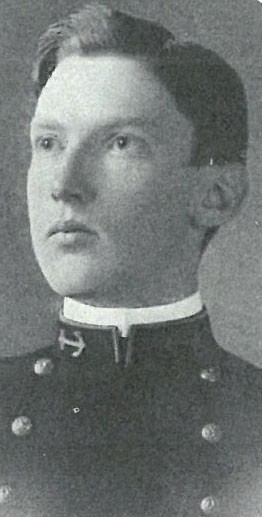 Donald Bradford Beary was born in Helena, Montana, on December 4, 1888. He attended Helena High School before his appointment to the US Naval Academy, Annapolis, Maryland, from Montana in 1906. Graduated in June 1910, he served at sea for the two years, as then required by law, before being commissioned Ensign, March 7, 1912. He subsequently progressed in rank to that Rear Admiral, to date from December 1, 1941 and Vice Admiral, to date from October 16, 1948. On October 1, 1950 he was transferred to the Retired List of the US Navy.

After graduation from the Naval Academy in 1910, he served consecutively in USS Tennessee, USS Washington, and USS Maryland, until September 1915. He next had instruction in electrical engineering at the Postgraduate School, Annapolis, Maryland, and Columbia University, New York, from which he received the degree of Master of Science in March 1917. He then joined USS Warrington. In February 1918 he assumed command of USS Remlik and from June to October of that year commanded USS Lamson. For this service he was awarded the Navy Cross, the citation stating:

“For distinguished service in the line of his profession as Commanding Officer of the USS Remlik and later of the USS Lamson, engaged in the important, exacting and hazardous duty of patrolling the waters infested with enemy submarines and mines, in escorting and protecting vitally important convoys of troops and supplies through these waters, and in offensive and defensive action, vigorously and unremittingly prosecuted, against all forms of enemy naval activity."

In December 1918 he reported for fitting out duty in USS Edwards at the Bethlehem Shipbuilding Corporation, Squantum, Massachusetts, but was detached before that destroyer was commissioned. From January 1919 until March 1921, he served in the Officers Records Section, Bureau of Navigation, Navy Department, Washington, DC. He commanded consecutively USS Talbot, USS Parrott, and USS Sumner, destroyers of the Pacific Fleet, during the period April 1921 until September 1923. Returning to the Navy Department, he reported for duty in the Division of Fleet Training, Office of the Chief of Fleet Training, Office of the Chief of Naval Operations, where he served until December 1925, after which he served as Navigating Officer of USS New Mexico until July 1928.

At the Naval Academy, Annapolis, Maryland, the three succeeding years, he was an Instructor in the Department of Electrical Engineering and Physics until February 1930, and Aide to the Superintendent until detached in July 1931. From August 1931 until April 1934 he was Assistant Chief of Staff to the Commander-in-Chief, Asiatic Fleet, USS Houston and USS Augusta flagships. Completing that assignment, he again had duty in the Navy Department, serving in the Office of the Chief of Naval Operations, Fleet Maintenance Division, from July 1934 until June 1936, and the following year he attended the Naval War College, Newport, Rhode Island, completing the senior course there.

Returning to sea, he was Executive Officer of USS Colorado from June 1937 until April 1938, after which he commanded USS Richmond. Detached from that command in June 1939, he had a two year tour of duty at the Naval Academy, serving as Officer in Charge of Buildings and Grounds and Aide to the Superintendent.

In May 1941 he was assigned duty in connection with taking over the US Army Transport Washington, renamed USS Mount Vernon, and assumed command at the Philadelphia Navy Yard when she was commissioned in the US Navy on June 16, 1941. For his services in that command he was awarded the Bronze Star Medal, Combat “V,” “For meritorious achievement…in connection with military operations against the enemy in the Pacific and Indian Ocean Areas, from the beginning of hostilities to June 11, 1942…” The citation further states in part:

“Displaying conspicuous professional ability and leadership in the organization administration and operation of a large troop transport in hazardous waters, (he) successfully negotiated the difficult passage through the heavily mined Sundra and Benka Straits to land desperately needed reinforcements for the beleaguered British garrison at Singapore, and to evacuate women and children from that stricken city, despite repeated Japanese air raids in the area…”

In September 1941 he was designated Commander Transport Division Nineteen, with additional duty in command of the USS Mount Vernon. Detached from that command in June 1942 following the disbanding of that division, he served as Commandant of the Naval Operations Base, Iceland, until January 1943. The next month he became Commander Fleet Operational Training Command, Atlantic Fleet. He was awarded the Distinguished Service Medal, with the following citation:

“For exceptionally meritorious service to the Government of the United States in a duty of great responsibility…from March 1943, to November 1944. A resourceful and aggressive administrator, (he) organized and expeditiously developed this vital command…(He) was responsible for the high state of battle proficiency and readiness for action maintained by the vessels trained under his command, and contributed in large measure to the successful prosecution of the war in all theaters.”

Reporting for duty with the Pacific Fleet in November 1944, he had duty in connection with the organization of Service Squadron SIX, assuming command of that Squadron when it was established. Operating under strict secrecy for eight months prior to the end of the war, Squadron SIX was the Navy’s revolutionary solution to the problem of tremendous distances involved in the Pacific War. With “SIX” at sea, the Fleet could choose its rendezvous points, retire a few hundred miles for refueling, rearming and reprovisioning, and strike again almost without interruption. Without it, the task units and fast carrier groups would have had to retire thousands of miles after a strike for reprovisioning. It was the Fleet’s “ace in the hole.”

Under his command, Squadron SIX first operated in direct logistic support of Admiral Spruance’s FIFTH Fleet during the invasion of Iwo Jima, feeding supplies to the Naval forces supporting the assault, and to the fast carrier forces under Admiral Mitscher.

As the Fleet struck again in support of the Okinawa invasion, Squadron SIX was on hand with fuel dumps and arsenals refueling and rearming the fast carrier groups for further strikes. In this operation Admiral Beary, in his flagship USS Detroit, remained at sea ninety-four days. Elements of the task forces remained at sea for seventy-nine consecutive days without the necessity of returning to fixed bases for supplies. In the final months of the war which saw Admiral Halsey’s powerful THIRD Fleet prowling the coast of Japan at will, Service Squadron SIX was no longer an experiment, but a weapon that gave our Fleet the power to wage an unlimited offensive which completely baffled the enemy. Commenting on the success of this squadron Admiral Beary stated: “The transfer of all types of supplies while underway on the high seas had been perfected to such a degree that the continued operations of the Fleet off the coast of Japan was limited only by battle damage and human and mechanical endurance.”

After the Japanese surrender, as Administrator of the US Naval Shipping Control Authority for the Japanese Merchant Marine, he was in charge of repatriation of some five million Japanese troops to their home islands. Utilizing what remained of their merchant marine and navy, his command was engaged in carrying Japanese troops from China and the many by-passed islands of the South and Central Pacific. On April 1, 1946 he assumed duty as Commandant of the Twelfth Naval District, headquartered in San Francisco, California, with additional duty from February 1947 as Commander Naval Base, San Francisco. On July 12, 1948, he was assigned further additional duty as Commander Western Sea Frontier, and Commander Pacific Reserve Fleet.

He reported on November 1, 1948, in the rank of Vice Admiral, as President of the Naval War College, Newport, Rhode Island. He was so serving when relieved of active duty pending his retirement on October 1, 1950.