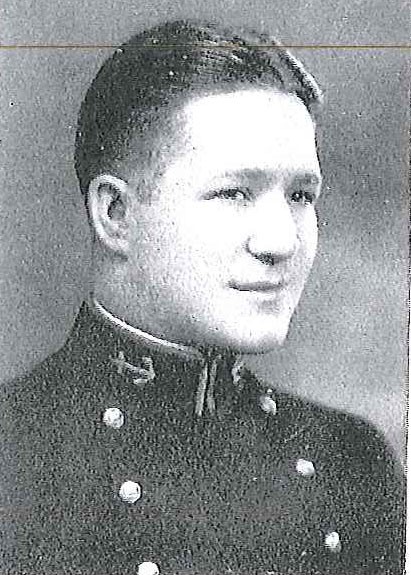 John Ellis Edwards was born in Waynesville, North Carolina, on June 7, 1909, son of Thomas F. and Lillie Belle (Gouge) Edwards. He attended Waynesville Township High School prior to his appointment to the US Naval Academy, Annapolis, Maryland, from his native state in 1926. As a Midshipman he played “B” squad football, and participated in boxing and wrestling. Graduated and commissioned Ensign on June 5, 1930, he subsequently advanced in rank, attaining that of Captain, to date from July 1, 1949.

Following graduation from the Naval Academy in 1930, he joined USS California, and in March 1931 was detached for instruction at the Naval Air Station, Pensacola, Florida, where he remained until August 1931. He was assigned to USS Oklahoma, and in June 1932 took passage in USS Ramapo for Asiatic Station. Following short duty in USS Smith Thompson, he reported in September 1932 aboard USS Pope. From September 1935 he served in USS Relief, transferring in June 1936 to USS Wasmuth.

For two years, June 1937 to June 1939, he attended a course in applied Communications at the Postgraduate School, Annapolis, Maryland, after which he had duty in USS Pennsylvania. Detached from that battleship in June 1941, he then joined the staff of Commander Destroyer Squadron ONE, USS Phelps, flagship. The Phelps was undergoing overhaul at the Naval Base, Pearl Harbor, when the Japanese attacked on December 7, 1941, and he subsequently was participated in action at Bougainville, the Coral Sea, Midway. Guadalcanal and Eastern Solomons. In March 1943 he assumed command of USS Phelps, and for “conspicuous gallantry and intrepidity while. . .(commanding the latter) during the seizure and occupation of enemy-held Attu Island in May 1943. . .”he was awarded the Silver Star Medal. The citation continues in part:

“In addition to commanding fire-support operations for the landing phase of the Attu assault, Lieutenant Commander Edwards was in charge of the control vessel in one area, guiding landing craft through dense fog and hazardous waters to the beaches. Later, during the same operation, his vessel provided effective close-range bombardment in support of our ground troops advancing against Japanese opposition. On one occasion, when his ship and another vessel in the vicinity were fighting off a torpedo attack by approximately sixteen Mitsubishi land bombers, the combined accurate anti-aircraft fire of the two vessels shot down one enemy plane and probably destroyed others. (His) skillful leadership and superb efficiency of the men in his command enabled our forces to escape undamaged. . .”

Detached from command of the Phelps in December 1943, he was ordered to the Bethlehem Steel Company, Staten Island, New York, where USS Brush was building. He became Commanding Officer of that destroyer when she was commissioned on April 17, 1944. For outstanding services in the Pacific area, while in command of the Brush, he was awarded the Legion of Merit, the Bronze Star Medal and a Gold Star in lieu of the Second Bronze Star Medal, each with Combat “V,” The citations follow in part:

Legion of Merit: “For exceptionally meritorious conduct. . . during our carrier-borne strikes against the enemy Japanese-held areas of Luzon in the Philippines, Formosa, French Indo-China and Edwards skillfully maneuvered his ship through dangerous enemy waters to carry our previously untried tactics of operations as an advanced strike picket in defense of our Task Force, accurately identifying and homing returning planes, providing timely warnings of enemy aircraft, vectoring Combat Air Patrols on successful interceptions and rescuing personnel from downed planes. By his brilliant and forceful leadership, dauntless courage and unwavering devotion to duty while operating with limited destroyer facilities and under extremely hazardous conditions, (he) contributed materially to the success of our sustained drive against the enemy in the Pacific theater of war.”

Bronze Star Medal: “For heroic achievement. . . in action against enemy Japanese forces in the vicinity of the Japanese Homeland on February 16, 1945. With his ship in an exposed position as advanced picket in enemy waters, (he) skillfully directed his vessel in taking under fire four hostile planes on separate occasion to shoot down one of them and successfully avoided the attacks of two others, thereby contributing to the successful defense of the Task Force. . .

Gold Star in lieu of Second Bronze Star Medal: “For meritortious achievement as Commanding Officer of USS Brush in action against enemy Japanese forces in the Pacific War Area on March 18 and 19, 1945. With his ship under repeated enemy aerial attacks while on advanced picket duty, (he) skillfully maneuvered and fought his vessel to shoot down two hostile planes intent on attacking our surface forces. . .”

In July 1945, following his detachment from command of the Brush the previous month, he reported as Assistant to the Head of the Communications Department, Postgraduate School, Annapolis, Maryland. He continued to serve in that capacity until June 1947, and the next month became Commander Destroyer Division ONE HUNDRED SEVENTY TWO. Between October and December 1948 he was Intelligence and Communications Advisor, Naval Advisory Division, Joint US Military Advisory Group to the Republic of China, with headquarters in Nanking. He was designated duty as Chief of Staff to the Commander Amphibious Group THREE.

He was District Intelligence Officer of the Thirteenth Naval District, with headquarters in Seattle, Washington, from June 1949 until July 1951, and following instruction at the Naval War College Newport, Rhode Island, assumed command in July 1952 of USS Pickaway. In September 2953 he reported as Head of the Informational Services and Reserve Liaison Section, Officer of the Chief of Naval Operations, Navy Department, Washington, DC.