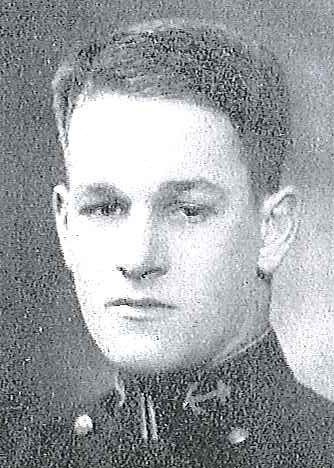 Following graduation from the Naval Academy in June 1930, he reported in August to  USS Marblehead, in which he served as a junior officer until September 1931.  He then began flight instruction at the Naval Air Station, Pensacola, Florida, but was detached in March 1932 for further sea duty on board USS Milwaukee.  In March 1934, he returned to Pensacola and completed flight training with designation as Naval Aviator (heavier than air) in April 1935.  Ordered to report to Commander Aircraft, Battle Fore, he was assigned to Fighting Squadron 5-b, based on USS Lexington, in which he served as a pilot from June 1935 until July 1937.

Duty for six months with Fighting Squadron 4, of USS Ranger preceded a tour of shore duty as an instructor at the Naval Air Station, Pensacola, which ended in November 1939.  He then, reported to Utility Squadron ONE, and was serving with that squadron, aviation unit of USS Rigel (ARB 1), at anchor at Pearl Harbor, when the Japanese attacked the Fleet there on December 7, 1941.  He remained with that squadron until June 1942, and for eighteen months thereafter served at the Intelligence Center for the Pacific Ocean Areas, Fourteenth Naval District Headquarters, Pearl Harbor.

He was awarded the Air Medal with the following citation:  “For meritorious achievement in aerial flight as a Pilot in Utility Squadron ONE, during operations against enemy Japanese forces in the vicinity of the Hawaiian Islands from December 10, 1941, to April 11, 1942.  During this trying period when the Naval Air strength in the Hawaiian Area was at its lowest ebb due to damage suffered by the Japanese attack, Lieutenant Badger flew numerous long patrol, search and convoy missions in non-combatant type aircraft which had already seen long service.  These aircrafts which had been damaged during the attack were hastily repaired, armed with a small caliber gun and pressed into service during a time of great national stress.  Frequently returning to a blacked-out base after dark without the use of navigational and radio aids, he effected safe landings on an unlighted field without the assistance of aircraft landing lights…”

He again returned to Pensacola in January 1944, this time for duty at the Naval Training School (Photography), and two years later was detached for a year’s duty in the Naval Photographic Service, Office of the Chief of Naval Operations, Navy Department, Washington, DC.  From January to May 1947, he served as Commanding Officer of the now Navy Photographic Center, Naval Air Station, Anacostia, DC.  From July 1947 to November 1948, he served at sea as Commander, Observation Wing, Pacific Fleet, under cognizance of Commander Battleships-Cruisers, Pacific Fleet, with additional duty as Observation Sub-Type Commander, Air Force, Pacific Fleet.

He reported in November 1948 to the Naval Air Station, Agana, Guam, for duty with Transport Squadron 6.  His squadron was soon ordered to Germany, however, and he took command on January 12, 1949.  VR-6 operated twelve planes from Rhein/Main Field, near Frankfrut, in the Berlin Airlift, and with another similar squadron, VR-8, flew many tons of supplies into Russian-blockaded Berlin during the crucial winter months of 1948-1949.  He was awarded the Legion of Merit by the Department of the Air Force (General Order #84, dated October 11, 1949) for “exceptionally meritorious conduct in the performance of outstanding service during the period January 9, 1949 to May 12, 1949…”

Instruction at the Naval War College, Newport, Rhode Island, in 1951-1952, was followed by a second tour in the Office of the Chief of Naval Operations, this time as Head, Civil Aviation Liasion Branch, in the Flight Services Division.  He was detached after two years there, and in May 1954 assumed command of USS Gilbert Islands (CVE 107).  He reported in January 1955 to the staff of Commander Military Air Transport Service, Andrews Air Force Base, Washington, DC, and on October 21, 1955 became the Senior Naval Officer attached to that command.  In June 1957, he was ordered to duty as Commanding Officer of the Naval Station, Bermuda.