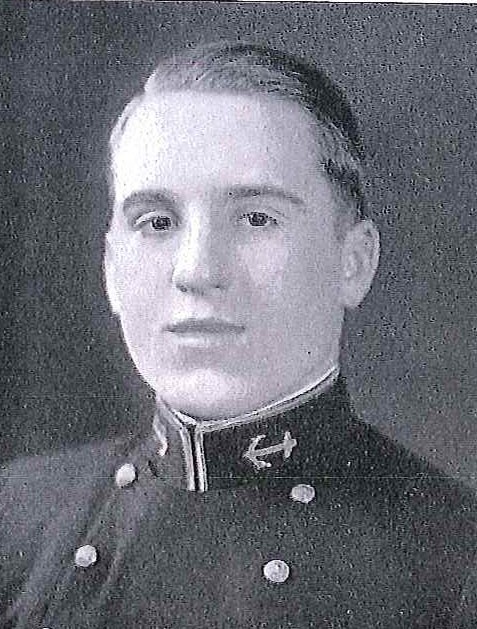 James Calvin Bentley was born in Lapeer, Michigan, on October 1, 1911, son of Henry Roy and Alice Matilda (Grace) Bentley. He attended Lapeer High School and had one year at Michigan State College before his appointment to the US Naval Academy, Annapolis, Maryland, which he entered in August 1930. As a Midshipman he played football (4 years) and was a member of the Crew (2 years). Graduated and commissioned Ensign on May 31, 1934, he subsequently progressed to the rank of Captain, to date from July 1, 1953.

After graduation from the Naval Academy, he served from July 1934 to June 1939 on board USS New Orleans, a cruiser of the Scouting Force, with duties in gunnery and engineering. During the next year he had communications and gunnery duties on board USS Wasmuth also operating with the Scouting Force, and from June 1040 until May 1941, was Engineering Officer of USS Schley, on the Hawaiian Sea Frontier. Upon detachment from the Schley, he was ordered to USS Cummings, a destroyer of the Pacific Fleet, and, serving as her Engineer Officer at the outbreak of World War II in December 1941, participated in action at Pearl Harbor on December 7, 1941.

Detached from the Cummings in October 1942, he served from November, that year, until June 1944 as Executive Officer of USS Beale, and as such took part in action at Cape Gloucester, New Britain, and the Saidor occupation in the Eastern New Guinea operation. During the period March 1944 until June 1945 he commanded USS Fanning which, under his command, participated in the Sabang raid, Soerabaja raid and bombardment of Marcus Island; and Luzon attacks; and the bombardment of Iwo Jima. He as awarded the Silver Star Medal and the Bronze Star Medal, with Combat “V,” for service while in command of the Fanning. The citations follow, in part:

Silver Star Medal: “For conspicuous gallantry and intrepidity as Commanding Officer of USS Fanning, during operations against enemy Japanese-held Marcus Island, Iwo Jima and Chichi Jima, from October 9, 1944 to January 5, 1945. Participating in six bombardments of enemy bases and a night surface action, Commander Bentley directed his destroyer through accurate and close-range hostile fire in inflicting important damage on enemy guns, shore installations, stores and boats without damage to the Fanning. During these actions he led his vessel in sharing equally with two other destroyers the destruction of a Japanese destroyer-transport and three landing ships…”

Bronze Star Medal: “For meritorious service as Commanding Officer of USS Fanning, during operations against enemy Japanese forces in the Central Pacific Area, on January 24, 1945. Proceeding through an area in which his ship had previously been subjected to very accurate fire from shore batteries, Commander Bentley quickly closed the range, and taking the enemy under fire, bombarded a hostile base and destroyed an enemy merchant ship. By his courageous leadership and ability, he aided greatly in the elimination of the enemy from this area…”

Returning to the United States, he reported in July 1945 to the Naval Postgraduate School, Annapolis, Maryland, where he served on the Staff until December 1946, and for six months thereafter he was assigned to the Seamanship and Navigation Department of the US Naval Academy. From July 1947 until June 1948 he served as Executive Officer of USS Columbus, a cruiser of the Pacific Fleet, then spent two years at Newport, Rhode Island, the first as a student (Strategy and Tactics), the last as an instructor at the Naval School, General Line.

Duty from August 1950 to July 1952 as Chief Staff Officer to the Commander, Service Squadron ONE, preceded another tour of duty on the Staff at the Naval War College. When detached in June 1955 he assumed command of USS Severn (AO-61). Under orders of November 20, 1956, he reported as Assistant Chief of Staff for Administration, to the Commander in Chief, Atlantic Fleet. On December 31, 1958, he was ordered detached and to duty as Chief, Naval Section, Military Assistance Advisory Group, Norway, with Headquarters at Oslo, Norway.