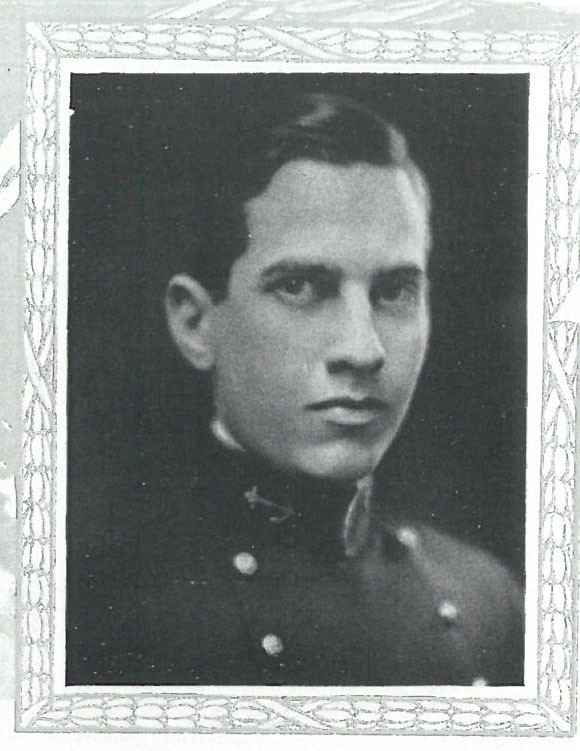 Captain Cady was born in Warren, Rhode Island, on July 11, 1900, son of Edward A. and Gertrude (Parmelee) Cady. He was graduated from the Moses Brown School, Providence, Rhode Island, with the Class of 1917, and entered the US Naval Academy from his native state in 1918. While a Midshipman he was a member of the “Log” staff. Graduated and commissioned Ensign on June 3, 1922, he subsequently progressed in grade until his promotion to Captain, to rank from April 1, 1943.

After graduation from the Naval academy in 1922, Captain Cady had consecutive duty in the USS Arkansas, Flagship of Battleship Division 5, Battle Force, and the USS Wright, Flagship Aircraft Squadrons, Scouting Fleet, until October 1924. Following a short period of instruction in Chemical Warfare at Edgewood Arsenal, Edgewood, Maryland, he assisted in fitting out the USS Memphis, and had duty in that cruiser from her commissioning, February 4, 1925, until March, 1928.

Captain Cady had duty on the staff of Admiral Henry A. Wiley, USN (now deceased) Commander in Chief, US Fleet, USS Texas, Flagship, from March 1928 until June 1929, and August of that year to June 1932, he was under postgraduate instruction in law under the supervision of the Office of the Judge Advocate General, Navy Department, Washington, DC, and received his Bachelor of Laws degree in 1932.

From June 1932 until June 1935, Captain Cady served as Executive Officer of the USS Gilmer, a unit of Destroyers, Scouting Force. The three succeeding years he had duty on the staff of the Postgraduate School, Annapolis, Maryland. In June 1938 he joined the USS Minneapolis, Flagship of Cruiser Division 6, Scouting Force, and served as her Engineer Officer until transferred on June 8,1940, to duty as Assistant Personnel Officer on the staff of Commander, Base Force. He became Fleet Personnel Officer on the staff of Commander, Base Force, in April, 1941, and served in that capacity until October 1943, during which time that Force operated under the Subordinate Command, Service Forces, Pacific Fleet.

Captain Cady assumed command of the USS Cimarron on October 19, 1943, and served in that command until April 1944, during which time in the Cimarron operated with Task Unit 16.20.2, to support the Fleet in the Gilbert Islands Operation, refueling Fleet units as required; returned to the United States for more fuel and joined Tack Force 58.1, on her return to participate in the Marshall Island Operation. Captain Cady was relieved of command of the Cimarron, with orders to duty at Headquarters, Commander In Chief, US Fleet, Navy Department, Washington, DC, reporting in May 1944.

In October 1945, Captain Cady was transferred to duty in the Office of the Chief of Naval Operations, Navy Department, where he served until detached for sea duty in December 1947. He is now serving as Commanding Officer of the USS Columbus.