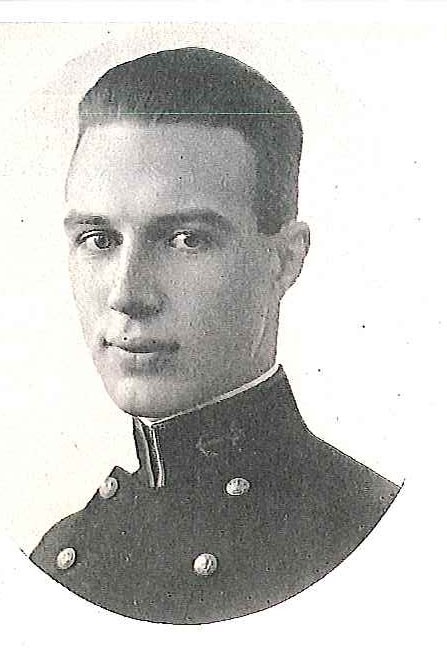 Captain Detzer, born in Fort Wayne, Indiana, on March 15, 1898, attended Fort Wayne High School before entering the United States Naval Academy at Annapolis, Maryland on June 14, 1917, on appointment from the Twelfth Indiana District. Graduated and commissioned Ensign on June 2, 1921, he subsequently advanced to the rank of Captain on June 20, 1942.

During World War I, Captain Detzer had service as a Midshipman aboard USS Maine, a battleship of the Atlantic Fleet, used for training personnel throughout the war.

Following graduation in 1921, he had consecutive service in USS Wyoming and USS Concord on her shakedown cruise around Africa, until May 28, 1926 when he returned to the Postgraduate School, Annapolis, for instruction in communication engineering. To further his knowledge in this field, he was ordered to duty in the Office of Naval Communications, Office of the Chief of Naval Operations, Navy Department, to Yale University, New Haven, Connecticut, and again to the Postgraduate School, Annapolis, during the period April 29, 1927 to May 29, 1928. Completing instruction, he reported to Battleship Division Two, Scouting Fleet, where he served as aide on the staff of Commander, with additional duty as Division Radio Officer.

From October 15, 1930 to February 28, 1931, he had duty as aide on the staff of Commander, Training Squadron, with additional duty as Squadron Radio Officer. Following duty in the Office of Naval Communications, Office of Naval Operations, Navy Department, Washington, DC from February, 1931 to April, 1933, he served successively as executive officer of USS Hulbert and USS Monaghan. A tour of duty in the Office of Naval Operations, Navy Department, from March, 1936 to May, 1938 preceded sea duty first as Radio Officer on the staff of Vice Admiral Adolphus Andrews, USN (now retired), Commander, Scouting Force. He was later Commanding Officer of USS Dewey, serving in that destroyer from January, 1941 until January, 1942.

On January 19, 1942, soon after the Japanese attack on Pearl Harbor, Captain Detzer again returned for service in the Office of the Chief of Naval Operations to remain there until September 12, 1944, when he was ordered to duty in connection with fitting out USS Briscoe. The Briscoe, and Auxiliary-Transport Attack ship with Captain Detzer in command since her commissioning on October 29, 1944, proceeded to Pearl Harbor to join the Amphibious Forces, Pacific Fleet, in December of that year. Following maneuvers and training period, Captain Detzer was detached from the Briscoe to command another Auxiliary-Transport Attack ship, USS Lenawee, on January 26, 1945, and continued in command when that ship was used as a unit of the “Magic Carpet” in returning veterans of the Pacific to the United States after the Japanese surrender on September 2, 1945.

On April 30, 1946, Captain Detzer reported for duty in connection with fitting out USS Toledo, CA 133, as prospective Commanding Officer. He assumed command of the Toledo when she was commissioned on October 27, 1946.