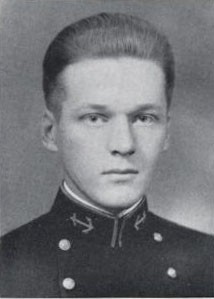 Edward William Abbot was born in Steelville, Missouri, on 20 November  1910, son of Edward Hancock Abbot and Mrs. Virginia Lenore (Bass) Abbot. He attended El Paso, Texas, High School; Texas College of Mines (for one year); and the US Hall Preparatory School in Columbia, Missouri (one half year); and on 13 July 1929 entered the US Naval Academy from Texas. Graduated with the class of 1933 and commissioned Ensign on 29 May 1934, he subsequently attained the rank of Commander, his date of rank 1 January 1944.

Following acceptance of a commission as Ensign in May 1934, he was assigned to the USS Colorado, in which he served until late 1937. He was aboard as a ship's officer when the Colorado proceeded to Howland Island, Phoenix Islands in the South Seas, in search of Amelia Earhart and her navigator Fred Noonan, missing in their around the world flight in 1937. He then sailed on board the USS Chaumont via Honolulu, Guam and Manila, arriving in Shanghai, China, on 11 February 1938. There he was assigned duty in the USS Pope (DD 225), and for service as Gunnery Officer of that destroyer during the Sino-Japanese 'incident' of 1938-1940, he received a letter of commendation from his Commanding Officer.

In the fall of 1940 he returned to the United States, and after brief duty at the Naval Receiving Station, San Francisco, California, he joined the USS Portland. While aboard that cruiser, during the early World War II period, 7 December 1941 to 1 September 1943, he participated in action at Coral Sea and Midway; the Guadalcanal-Tulagi landings, including First Savo; Eastern Solomons (Stewart Islands); Santa Cruz Islands; the capture and defense of Guadalcanal; and Guadalcanal, Third Savo. He has the ribbon for, and a facsimile of, the Navy Unit Commendation awarded the USS Portland for outstanding heroism.

Transferring to the USS Tennessee (BB 43) in September 1943, he took part in the occupation of Japan as a Navigator of that battleship, and aided in the re-employment and disposition of Japanese ships. He later commanded the Tennessee from 8 December 1945, when the ship was prepared for laying up with the Philadelphia Group of the Sixteenth Fleet (Inactive) or Mothball Fleet. He has a facsimile of (and Star for his Ribbon) the Navy Unit Commendation awarded the USS Tennessee for 'outstanding heroism in action against enemy Japanese forces during the period from 31 January 1944 to 21 June 1945...'

Detached from the Tennessee in December 1946, he was next ordered to the USS Beatty, which under his command in April 1947 was one of two US vessels representing the United States at the funeral of the late King Christian of Denmark, arriving in Copenhagen on 28 April 1947, carrying a detachment of US Marines. He remained in command of the Beatty until March 1949, and in April reported for a tour of duty in the Plans and Policy Division of the Bureau of Naval Personnel, Navy Department, Washington, DC.

He was then under orders to report in February 1952 to the Armed Forces Staff College, Norfolk, Virginia, for instruction.

In addition to the Ribbon and Star for the Navy Unit Commendations to the USS Portland and the USS Tennessee, Commander Abbot had the American Defense Service Medal; the Asiatic-Pacific Campaign Medal with combat stars; the World War II Victory Medal; and the Navy Occupation Service Medal, Asia Clasp.