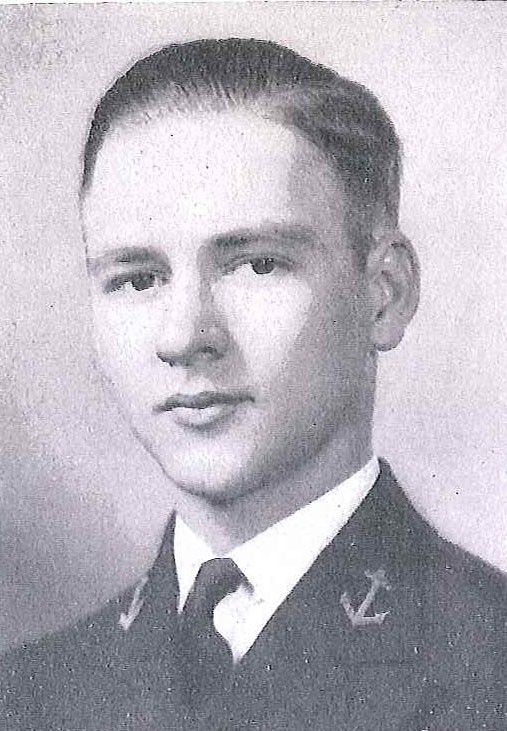 Bernhard H. Bieri, Jr., was born in Camden, New Jersey, on October 12, 1915, son of Vice Admiral B. H. Bieri, USN, Retired, and Mrs. (Elsie Genther) Bieri. He attended high school in Washington, DC, prior to his appointment to the US Naval Academy in 1933. Graduated and commissioned Ensign on June 3, 1937, he transferred to the Supply Corps in 1939, and subsequently advanced in rank to Rear Admiral.

His first assignment was aboard USS Maryland, where he served for a year as Assistant Navigator. In August 1938 he joined USS Phoenix for duty in the Gunnery Department. A year later, with his transfer to the Supply Corps, he was ordered to the Navy Finance and Supply School, Philadelphia. Following graduation in June 1940, he reported as Disbursing Officer for Destroyer Division 10, aboard USS Perkins, flagship of that Division.

In April 1941 he reported to the Naval Supply Depot, San Diego, California, where he was Assistant Purchasing Officer for a year. From May 1942 until October 1943 he served as Supply Officer of USS San Francisco. In that capacity, he participated in the Guadalcanal Campaign (Guadalcanal-Tulagi landings, the capture and defense of Guadalcanal, Cape Esperance action, and First, Second and Third Savo) and was on board during the Occupation of Attu during the Aleutian Islands Operation. He received a Letter of Commendation, with Ribbon and Combat “V,” for meritorious service in action during the Second Battle of Guadalcanal. He is also entitled to the Ribbon for the Presidential Unit Citation to USS San Francisco “for outstanding performance in action against enemy Japanese forces off Savo Island in the Solomon Islands on the night of November 13, 1942…”

Detached from the San Francisco in October 1943, he became Executive Officer of the Officer Personnel Division, Bureau of Supplies and Accounts. While in that assignment, he was appointed by the Secretary of the Navy to serve as a Member of the Board to consider and make recommendation for the transfer to permanent commissioned rank in the US Navy of Naval Reserve and Temporary Officers. He was awarded a Letter of Commendation from the Secretary of the Navy for his initiative and resourcefulness in that post during a period when the Supply Corps was expanded to over 17.000 officers and subsequently largely demobilized.

From January 1947 to October 1948 he served as Officer in Charge, Ships Supply Depot, US Naval Supply Center, Pearl Harbor, Hawaii. He returned to the United States in November 1948, and for two and one-half years thereafter was Assistant General Stores Supply Officer at the General Stores Supply Office, Philadelphia, Pennsylvania. Following a year’s duty as Executive Officer of the Naval Supply Depot, Bayonne, New Jersey, he attended the Naval War College, from August 1952 to June 1953, when he completed the Naval Warfare course. He was then ordered to Washington, Dc, to serve as a Member of the Logistics Team, Joint Logistics Planning Group, Office of the Joint Chiefs of Staff.

In August 1954 he was transferred to duty as Aide to the Assistant Secretary of the Navy (Material), in which capacity he served until March 1956. From April of that year until July 1959 he was Supply Officer of the Long Beach (California) Naval Shipyard, with additional duty as Staff Supply Officer, Commander Naval Base, Los Angeles, California. He attended the National War College, Washington, DC, for one year, and in June 1960 returned to duty in the Bureau of Supplies and Accounts.

He assumed command, in September 1961, of the Naval Supply Depot in Seattle, Washington. He became Deputy Chief of Naval Material (Material and Facilities) in December 1962. The Legion of Merit was awarded him for his “…vital contributions to the successful and unprecedented reorganization of the Officer of Naval Material…” from December 1962 to March 1965.