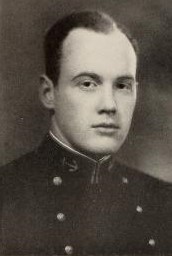 Edward Emerson Colestock was born in Lewisburg, Pennsylvania, on February 25, 1907, son of Dr. and Mrs. H.T. Colestock. He entered the US Naval Academy, Annapolis, Maryland, from his native state in 1926, and was graduated and commissioned Ensign on June 5, 1930. By subsequent advancement, he attained the rank of Captain, to date from July 1, 1949. His selection for the rank of Rear Admiral was approved by the President on July 18, 1958, his date of rank August 1, that year.

After graduation from the Naval Academy in June 1930, he had a month’s instruction at the Naval Air Station, San Diego, California, and in August joined the battleship Oklahoma. He was detached in April 1931 for further aviation training at the Naval Air Station, Pensacola, Florida, and remained there, after his designation as Naval Aviator, from August 1931 until October. He then joined Fighting Squadron 6B, based on the USS Saratoga, operating with the Battle Force.

In July 1935 he was transferred to Patrol Squadron 4F at Pearl Harbor, T.H., and from May 1938 until June 1941 served on board the carrier Lexington. Ordered next to the Naval Air Station, Kaneohe Bay, T. H., he was on duty there when the Japanese attacked the Fleet at Pearl Harbor on December 7, 1941. He remained in that assignment until January 1943, then had duty in connection with fitting out the USS Pybus at the Seattle-Tacoma Shipbuilding Corporation’s plant at Tacoma, Washington. He joined the Pybus at her commissioning in May 1943, and as her Air Officer during the next four months assisted in preparing her for transfer to the British under lend-lease agreement.

He assisted in fitting out the USS Wake Island at the Kaiser Company, Inc., of Vancouver, Washington, and in October 1943 returned to sea as Executive Officer of the old USS Midway, later renamed the USS St Lo. In July 1944 he reported for pre-commissioning duty with the USS Bennington, and served on board from her commissioning in September of that year until February 1946, first as Air Officer, and from May 1945 as Executive Officer. For “meritorious achievement as Air Officer of the USS Bennington in action against enemy Japanese forces from February 10, 1945, until May 15, 1945…” he was awarded the Bronze Star Medal, with Combat “V.”

In March 1946 he reported to the Navy Department, Washington, DC, to serve until July 1947 in the Officer of the Assistant Chief of Naval Operations (Logistics), in charge of the Carrier Desk of the Ship’s Characteristics Board. While in that assignment he assisted in establishing the characteristics for our new and modernized carriers, embodying principles that had been developed as a result of experience gained during World War II.

He then had two years’ service as Chief of the Offensive Air Branch in the Air Intelligence Division, Office of the Naval Intelligence, leaving the Navy Department 1949 for instruction at the Air War College, Maxwell Air Force Base, Alabama. In June 1950 he was ordered t report as Commanding Officer of Air Transport Squadron 5, at Moffeff Field, California, for operations with the Fleet Logistics Air Wing.

On October 1, 1952, he assumed command of the USS Pine Island, and in August 1953 was detached for instruction at the National War College, Washington, DC. Completing the course, he reported in July 1954 as Chief of the US Navy Section, US Military Mission to Brazil, with Headquarters at Rio de Janeiro. He became Commanding Officer of the attack aircraft carrier Yorktown on September 14, 1956, assuming command of the “Fighting Lady” at Alameda, California, her tenth Commanding Officer.

“In these positions, Rear Admiral Colestock was most instrumental in furthering the interests of the mutual security of the United States and Brazil, providing timely and effective guidance on all phases of the Military Assistance Program and rendering valuable service to the Brazilian Navy through mutual discussion and exchange of ideas. Through his outstanding professional and technical competence, sound judgment, and diplomacy, he was contributed greatly toward advancing the capability of the Brazilian Navy in defense interests common to both Brazil and the United States…”

In May 1965 he was assigned to the Office of the Chief of Naval Operations, Navy Department, where he remained until relived of active duty pending his retirement, effective July 1, 1965.