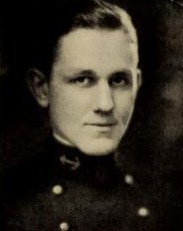 Charles Frederick Coe was born in Springfield, Illinois, on April 6, 1901, the son of Louis Johnson Coe and Mrs. (Lydia A. Williams) Coe. He attended high school in Springfield, prior to his appointment to the US Naval Academy, Annapolis, Maryland, from his native state in 1919. Graduated and commissioned Ensign on June 8, 1923, he subsequently attained the rank of Rear Admiral to date from October 1, 1950.

After graduation from the Naval Academy in 1923, and following brief duty in the Bureau of Ordnance, Navy Department, Washington, DC, he reported in August of that year, aboard the USS Florida. Transferred to the USS Litchfield in October 1924, he served in that destroyer until June 1925, when he received orders to report to the Naval Air Station, Pensacola, Florida, for flight training. Designated Naval Aviator on April 24, 1926, he had a month’s service with Aircraft Squadron, Battle Fleet, after which he reported in September 1926 as a member of Observation Squadron One, attached to the USS Maryland.

During May and June 1927 he was assigned to the Naval Air Station, Naval Operating Base, Norfolk, Virginia, and following fitting out duty in the USS Saratoga he joined her upon her commissioning on November 26, 1927 to serve for two years in her Air Department. Detached from the Saratoga in July 1929 he served until June 1932 as an Instructor at the Naval Air Station, Pensacola, Florida. For two years, June 1932 to June 1934 he was assigned to Fighting Squadron Six, aboard the USS Saratoga, after which he reported for duty in the Engine Section of the Bureau of Aeronautics, Navy Department.

In June 1936 he joined the staff of Commander Aircraft Base Force (later redesignated Aircraft, Scouting Force), as Engineer Officer, and in January 1938 transferred in a like capacity to the staff of Commander Aircraft Battle Force. He continued that duty until June of that year when he reported to Patrol Squadron Eleven, based in the USS Langley. From June 1939 to October 1940 he was assigned to the Naval Air Station, Naval Operating Base, Norfolk, Virginia.

Following that duty he became Operations Officer on the staff of Commander Patrol Wing Two based at Pearl Harbor, Territory of Hawaii, and was so serving upon the outbreak of hostilities with Japan, December 7, 1941. For this duty, he received a Letter of Commendation, with authorization to wear the Commendation Ribbon, from the Commander in Chief, US Pacific Fleet, for, for excellent service…. As Head of the Plans Division on the staff of Commander Patrol Wing Two from December 7, 1941 to July 29, 1942, during and subsequent to the Japanese attack on Pearl Harbor…”

Between July and September 1942 he had duty on the staff of Commander Patrol Wing, Pacific, after which he transferred to duty as Operations Officer on the staff of Commander Aircraft South Pacific Force. He was awarded the Legion og Merit for “exceptionally meritorious conduct…from September 21, 1942 to May 30, 1943. During this period, (he) capably directed the combat aircraft operations conducted by the combined Allied air forces in repeated attacks against enemy shore installations and shipping, and contributed materially to the destruction of large numbers of Japanese aircraft….”

In July 1943 he reported As Chief of Staff to the Commander Air, Solomon’s and for this service was awarded an Oak Leaf Cluster in lieu of a second Legion of Merit (Army), and an Army Air Medal for this assignment and prior service. The citations follows in part:

Legion of Merit: “….. he demonstrated superior foresight, initiative and energy in his many duties, relieving the air commander of administrative burdens, and helping to formulate strategic plans….and was of inestimable value in the operational employment of air units of the United States Army Air Force, Navy and Marine Corps, and of the New Zealand Air Force.”

Air Medal: “For meritorious achievement from 18 September 1942 to 15 November 1943 while participating in aerial flights of a hazardous nature incident to his duties on the staffs of the Commander Air South Pacific and Commander Air Solomon Islands.”

Returning to the United States in December 1943, he was in command of the Naval Air Station, Memphis, Tennessee, a unit of the Naval Air Primary Training Command, until April 1945, after which he put into commission the USS Puget Sound on June 18, 1945, and assumed command. After preliminary trails and tests, the Puget Sound arrived at Pearl Harbor, T.H., and joined the Pacific Fleet. In January 1946 he was ordered to take charge of inactivating the USS Hornet. That duty completed in August 1946, he reported As Chief of Staff and Aide to the Chief of Naval Air Training, Pensacola, with additional duty as Deputy Chief of Naval Air Training.

He commanded the USS Leyte from March 1948 until April 1949, after which he reported as Assistant Director of the Air Warfare Division, Office of the Chief of Naval Operations, Navy Department. In May 1949 he became Director of that Division.

He reported in April 1952 as Deputy Director, Joint American Military Advisory Group, London, England, and continued to serve as such until September 1952, when he was ordered to duty as Paris Representative, Joint Staff, Commander in Chief, US European Command.

In addition to the Legion of Merit, the Oak Leaf Cluster in lieu of the Second Legion of Merit (Army), the Army Air Medal, and the Commendation Ribbon, Rear Admiral Coe has the American Defense Service Medal, Fleet Clasp; the American Campaign Medal; Asiatic-Pacific Campaign Medal; the World War II Victory Medal; the Navy Occupation Campaign Medal, Asia Clasp; and the China Service Medal. He also has the Order of the British Empire, rank of Commander, warded him by the Government of Great Britain.