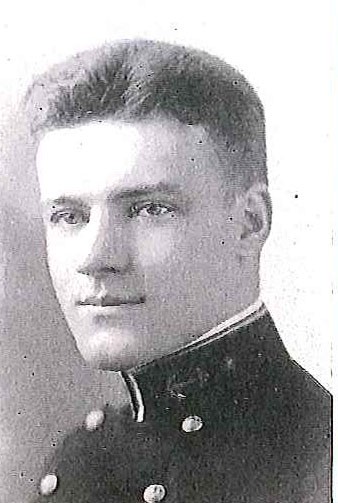 Randal Euesta Dees was born in Crystal Springs, Mississippi, October 8, 1893, son of Walter Linwood Dees and Julia Vining Dees. He attended Crystal Springs High School, and was graduated from Mississippi College, Clinton, Mississippi, in 1912, with the degree of Bachelor of Science. He was appointed to the US Naval Academy from his native state and entered on June 30, 1913. While a Midshipman he was manager of the “Luck Bag” and manager of “Reef Points.” Graduated with distinction and commissioned Ensign in March with the Class of 1917, he received temporary promotions to Lieutenant, both grades, during World War I, was commissioned in those ranks in 1920, and subsequently progressed in grade to rank of Captain on June 30, 1942. He was appointed Commodore for temporary service, to rank from April 3, 1945, and reverted to Captain in January 1947. He was transferred to the Retired List of the Navy on June 30, 1949, and advanced to the rank of Rear Admiral on the basis of combat citations.

After graduation in March 1917, he had consecutive duty in USS New Jersey; in USS SC-22 while commanding a division of submarine chasers; in USS Vestal; and in USS Atlantic II as Assistant to the Squadron Commander of Submarine Chasers, later as Acting Squadron Commander. In March 1919 he assisted with fitting out USS Dupont, and served as Gunnery Officer of that destroyer from her commissioning, April 30, 1919 until October 1920. During this assignment the Dupont participated in guarding the first successful trans-Atlantic seaplane flight in May 1919, and later operated in the Black Sea during the White Russian campaigns and the rise of the Turks under Mustapha Kemal Pasha.

From October 1920 until September 1922, he successively commanded USS Flusser and USS Sharkey. The next two years he was an instructor in the Department of Seamanship at the Naval Academy, Annapolis, Maryland. Returning to sea, he served in USS Enebola from June until August, 1924, and thereafter as Navigator of USS Dobbin until July 1927. He was under postgraduate instruction in general line duties at the Postgraduate School, Annapolis, Maryland, from August 1927 until June 1928, attended the Naval War College, Newport, Rhode Island and completed the junior course in May 1929.

He was Aide to the Naval Governor of Guam from July 1929 until July 1931. In addition to having charge of civil administration of the island, he was chairman of the Bank of Guam; chairman of the Pardon Board; Attorney General of Guam; member of the Island Defense Board; and served as Acting Governor during two months’ absence of the Naval Governor.

After his return to the United States in September 1931, he was under instruction in International Law and Relations at Harvard University, Cambridge, Massachusetts, where he received the degree of Master of Arts in International Law in June 1933. He then joined USS Chicago, serving as Gunnery Officer of that cruiser until June 1936. The three succeeding years he had duty at the Naval Academy as an instructor in the Department of Mathematics, as executive officer of the department, and as acting head of the department. In June 1939, he assumed command of USS Winslow, and served in that command until June 1941. The Winslow won the Fleet Gunnery Trophy in 1939 and the Fleet Engineering Trophy in 1940, gaining the honor of wearing simultaneously the maximum of nine “Es”, for Excellency. For two years from June 1941, he served on the Staff of the President of the Naval War College, Newport, Rhode Island for duty as Gunnery Officer and Assistant Operations Officer, on the College Staff.

For services in command of that cruiser, unit of a task group, he was awarded the Silver Star Medal and the Legion of Merit, the citations stating in part:

Silver Star Medal: “For conspicuous gallantry and intrepidity as Commanding Officer of USS Pensacola during the occupation of enemy Japanese-held Gilbert Islands from November 18 to 26, 1943. Valiantly maintaining position in the Task Group within easy bombing range of Japanese bases for a period of eight days, captain Dees directed his command in the vigorous bombardment of hostile shore installations at Botio Island and although under fire from shore batteries and twice subjected enemy torpedo attack, brought the Pensacola through undamaged….”

Legion of Merit with “V”: “For exceptionally meritorious conduct in performance of outstanding services to the Government of the United States….during operations against enemy Japanese forces in the Marshall Islands Campaign, from January 23 to March 17, 1944. A superb seaman, directing his command with courageous and inspiring leadership, Captain Dees effectively participated in several bombardments of Wotje Island, Wotje Atoll, during January and February, and of Toroa Island, Maleolap, on January 30 and 31, 1944….”

Relieved of the Pensacola, he reported for duty on the Staff of Commander, Service Force, Pacific Fleet, as Personnel Officer, a duty which included the procurement and distribution of all personnel officer and enlisted, the supervision of the Fleet Technical Schools, and the recreational and service stores facilities in the entire Pacific Area. He received a Gold Star in lieu of a Second Legion of Merit for “exceptionally meritorious conduct in the performance of outstanding service as Naval Personnel Officer, United States Pacific Fleet, from June 1944 to September 1945. He displayed a high degree of initiative and professional skill in matters pertaining to the procurement and distribution of all enlisted and officer personnel. At a time when the personnel demands very often exceeded the supply he organized and administered his rapidly expanding department to fulfill a maximum of personnel requirements for ships and units of the Pacific Fleet. In addition, he provided welfare and recreational facilities for the entire Pacific Ocean Areas….”

While still serving as Personnel Officer on the Staff of Service Forces, Pacific Fleet, he was appointed Commodore for temporary service. He was ordered to return to the United States in May 1946, and after temporary duty in the Bureau of Naval Personnel, Navy Department, he reported in July 1946 to the Naval War College, Newport, Rhode Island, for duty on the staff. He was so serving when relieved of active duty and placed on the Retired List, effective June 30, 1949.