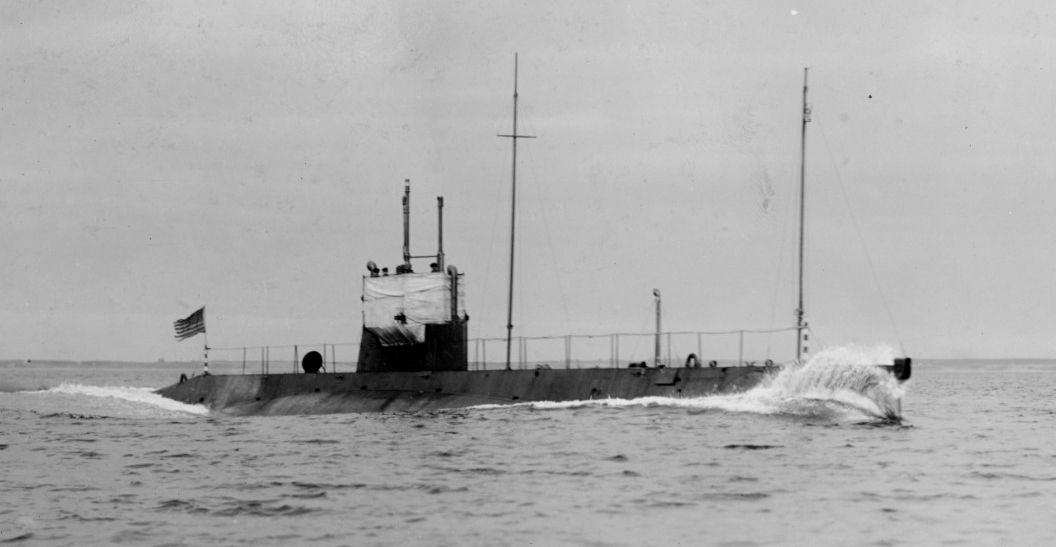 Caption: L-1 running at 14 knots during trials off Provincetown, Mass. Though the original print bears a date of March 1915, this is probably an error. The actual date is more likely March 1916. (Naval History and Heritage Command Photograph NH 51152)

L-1 received orders on 5 May 1916 assigning her to Commander, Division Five, Submarine Flotilla, Atlantic Fleet. The submarine conducted her shakedown in the waters off New England (29 April-22 June 1916) and afterward proceeded to the Philadelphia (Pa.) Navy Yard, where she arrived on 24 June. She departed on 1 July and arrived that same day at Cape May, N.J. for exhibition purposes. She cleared on 5 July and trained underway in Long Island and Block Island sounds (6 July-20 August) conducting tactical maneuvers and torpedo exercises with Bushnell (Submarine Tender No. 2). She then proceeded to Lynnhaven Roads, Va., in the Chesapeake Bay as part of her strategic maneuvers (21-24 August) in company with Bushnell. She then conducted her first preliminary torpedo practice at Napeague Bay, N.Y. (1-3 September) before moving on to the Boston Navy Yard, where she engaged in maneuvers and underwent repairs and overhaul (4 September-1 October). Through the remainder of 1916, she ranged the Atlantic from New England to Florida developing and testing the tactics and techniques. She cleared Key West on 23 December and sailed for the Caribbean.

L-1 conducted annual fleet tactical training and gunnery/torpedo exercises in the waters off Cuba early in 1917. With the German resumption of unrestricted submarine warfare on 1 February, the fleet consolidated initially at Guacanayabo Bay and by 31 March, had re-located to the sheltered waters of the lower Chesapeake Bay. When the U.S. declared war on Germany and entered the World War on 6 April 1917, L-1 was still with the fleet. L-1 departed York Spit, Va. on 4 May; bound for the Philadelphia Navy Yard, she proceeded in company with Bushnell, L-2 (Submarine No. 41), L-3 (Submarine No. 42), and L-4 (Submarine No. 43). All arrived without incident.

In June 1917, Vice Adm. William S. Sims, Commander, U.S. Naval Forces in European Waters, cited British success in using submarines as submarine hunter-killers in antisubmarine warfare (ASW). The Allied submarines, with their lower profiles, could approach U-boats more stealthily than larger surface patrol vessels. On 2 July, Adm. William S. Benson, Chief of Naval Operations, ordered the twelve most suitable submarines on the Atlantic coast be fitted out for duty in European waters. L-1 underwent extensive overhaul at Philadelphia, to prepare her for distant service. On 14 November, the boat departed Philadelphia and conducted submerged and surface maneuvers off Lewes, Del., and returned that night.

L-1, in company L-2; L-3; L-4; L-9 (Submarine No. 49); L-10 (Submarine No. 50); L-11 (Submarine No. 51); E-1 (Submarine No. 24); Bushnell (with Capt. Thomas C. Hart, Commander, Submarine Flotilla embarked); and Fulton (Submarine Tender No. 1), cleared Philadelphia on 18 November 1917 and proceeded to New London, Conn. (Base No. 22), arriving on 22 November. From there, they departed on the 27th, bound for European waters via Melville, R.I. Having charted a direct course to the Azores, Hart’s force ran into a gale which scattered them and required them to pause and re-assemble at Bermuda (Base No. 24) on 13 December. L-1 reached Ponta Delgada, Azores (Base No. 13) on 18 December. After her arrival, she underwent repairs and overhaul into January 1918. L-1 then departed in tow of Bushnell on 18 January and bound for Queenstown [Cobh] (Base No. 6), Ireland. On 21 January, she lost tow and proceeded under her own power until re-establishing tow on the 23rd. She continued until 27 January, when she cast off the tow and proceeded in to Queenstown under her own power escorted by U.S. destroyers. She anchored that evening and then went alongside Bushnell, the next day. Though under the nominal command of Vice Adm. Sims, Hart’s U.S. submarines in Ireland, came under Vice Adm. Sir Lewis Bayly, RN, Commander-in-Chief, Coast of Ireland, and his submarine commander, Capt. Sir Martin E. Nasmith (later Dunbar-Nasmith), RN. Bayly initially ordered Hart to deploy only one of his submarines at a time at sea, and that Royal Navy officers were to always be informed of departures and returns. Their patrol area was also to be limited to seaward of the Fastnet Light, so as to keep clear of British patrols and to avoid potentially fatal friendly-fire incidents. The base at Queenstown, however, proved unsatisfactory for Lt. Cmdr. Harold M. Bemis’ Division Five, as it was also serving as the headquarters for the surface patrol forces. As a result, the U.S. submarines were relocated to a base at Berehaven [Castletownbere], Bantry Bay. On 5 February, L-1 parted company with Bushnell and stood out of Queenstown en route to Bantry Bay. She arrived at Berehaven later that night. In the ensuing days (6-16 February), the division trained in Bantry Bay conducting dives and tactical maneuvers under the charge of the commander of the Royal Navy’s Submarine Flotilla also based at Berehaven. U.S. submarine officers also trained with a “submarine attack war game” apparatus on board HMS Vulcan. In order to denote them from the British L-class submarines., the U.S. submarines were re-designated with the suffix “A” (American) and the letter was painted onto the fairwaters of the U.S. boats. After division training, AL-1 underwent overhaul (24 February-24 March) then made additional repairs, including the installation of a new periscope, at Haulbowline in Queenstown through April. Afterward, she sailed for Berehaven on 11 May.

Caption: L-1 in Bantry Bay, Ireland, with crew members standing in formation on her foredeck, 1918. Note identification code painted on her fairwater, with AL-1 standing for American submarine L-1 to distinguish her from the British submarine L-1. (Naval History and Heritage Command Photograph NH 51156)

While on patrol on 21-22 May 1918 near the Scilly Islands, AL-1 reported contacting a German U-boat. Having been able to observe the entire stretch of the submarine’s deck and guns, she reported that the U-boat was of the U-110 class. AL-1 reported firing two torpedoes, one at the German bow and one at the conning tower. Delays in the torpedo room, however, prevented other shots being fired. The German submarine took evasive action and returned fire with her stern gun. The German fire proved ineffective, though as the U.S. submarine was submerged, the latter could not spot the fall of the German rounds through the periscope. In the end, the submarines broke contact and the action produced no result. AL-1 resumed her routine patrol. Just over two weeks later, on 6 June, AL-1 was cruising in the vicinity of Small’s Light, Ireland, when she encountered O’Brien (Destroyer No. 51). The latter fired two shots from her bow gun which missed. In response, the submarine deployed a smoke grenade as a visual signal. With the destroyer’s like signal in response, AL-1 submerged and maneuvered so as to avoid any further contact with U.S. destroyers that may have generated friendly-fire. On 12 June, Lt. Cmdr. Ronan C. Grady relieved Lt. Cmdr. Bemis as the division’s commanding officer. Having returned from a patrol on 26 June, AL-1 reported sighting a U-boat south of Daunt Rock, Ireland, but could not attack. Just over a month later, on 27 July, the submarine was en route to Berehaven, when she sighted a U-boat. Having spotted the U.S. submarine, the German dived at once. AL-1 kept a close lookout and had an initial oscillator sound contact, that was lost and then she proceeded toward Berehaven on the surface, reaching the next day. On 24 August AL-1 conducted ASW training exercises with U.S. submarine chasers. 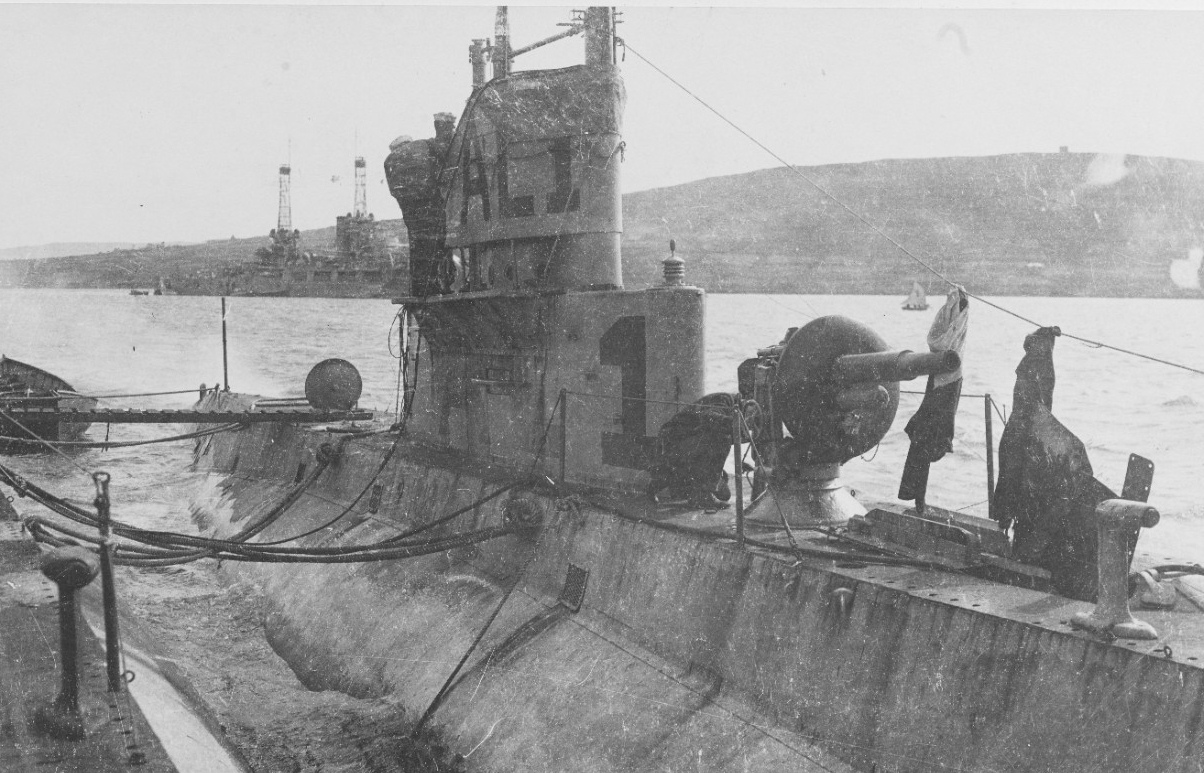 Caption: Alongside L-3 (Submarine No. 42) at Berehaven, Ireland, 1918. Nevada (Battleship No. 36), which arrived in Ireland with Oklahoma (Battleship No. 37) on 23 August 1918, is in the background. L-1's 3/23 deck gun is visible in the foreground. Also note the “AL” identification mark on her conning tower. (Naval History and Heritage Command Photograph NH 752) 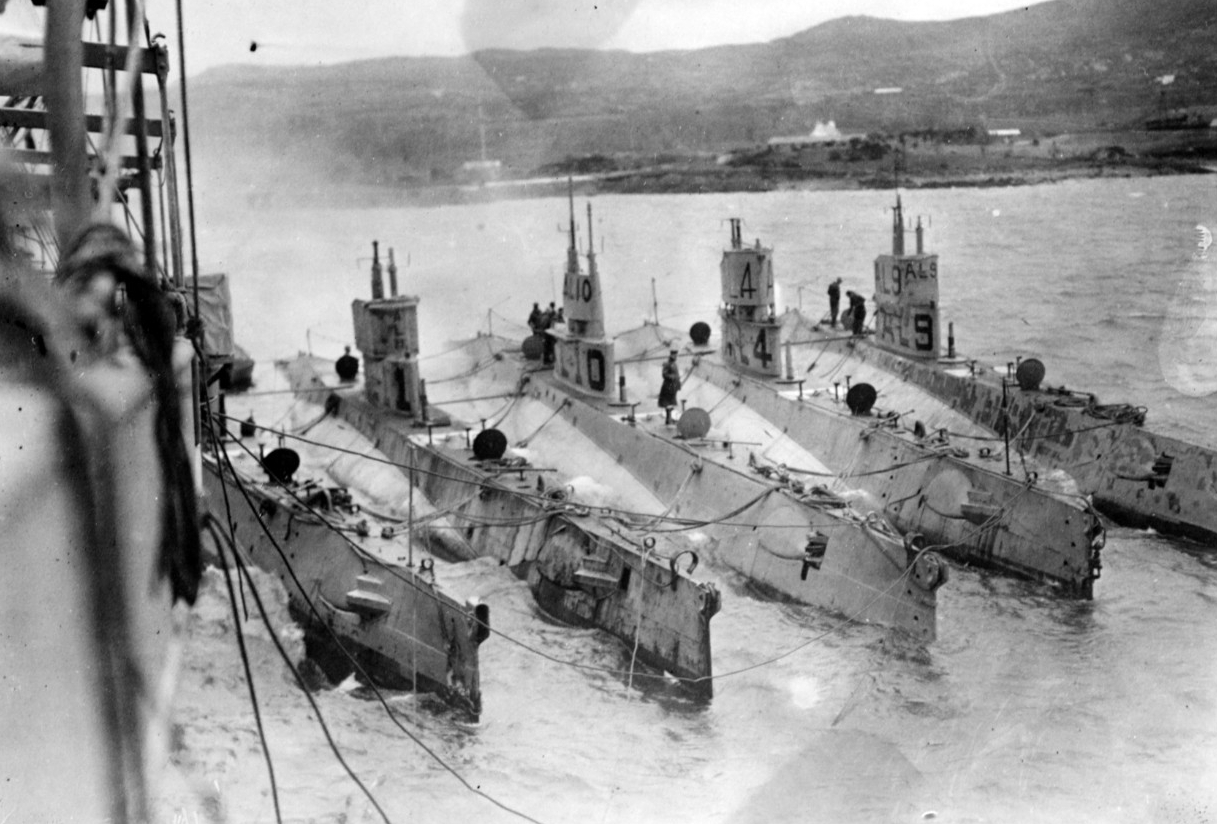 Just prior to the Armistice of 11 November 1918, L-1 shifted to Portland, England, as an operational base. She continued to operate from there through the Christmas and New Year’s holidays. 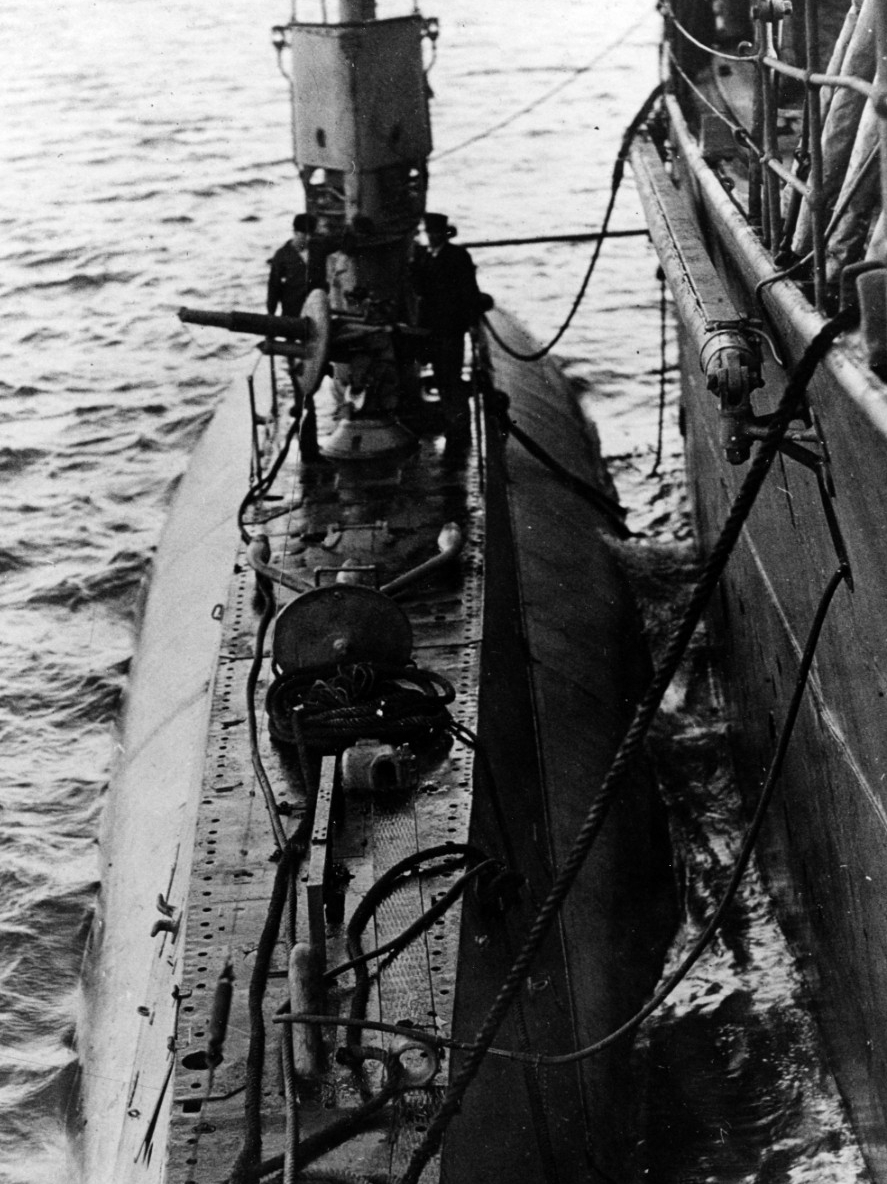 Caption: L-1 alongside Bushnell at Portland, England, 1918. Note L-1's 3/23 retracting deck gun trained out to starboard, and Y-tube hydrophone immediately behind her open foredeck hatch. Also note the boat boom attached to Bushnell's side, with pivoting mechanism at its end and walkway board on its upper surface. (Naval History and Heritage Command Photograph NH 51159)

AL-1 departed Portland on 3 January 1919, on a westerly course bound for a return to the U.S. She reached the Philadelphia Navy Yard on 1 February. Afterward, she docked and underwent an extensive post-deployment overhaul. 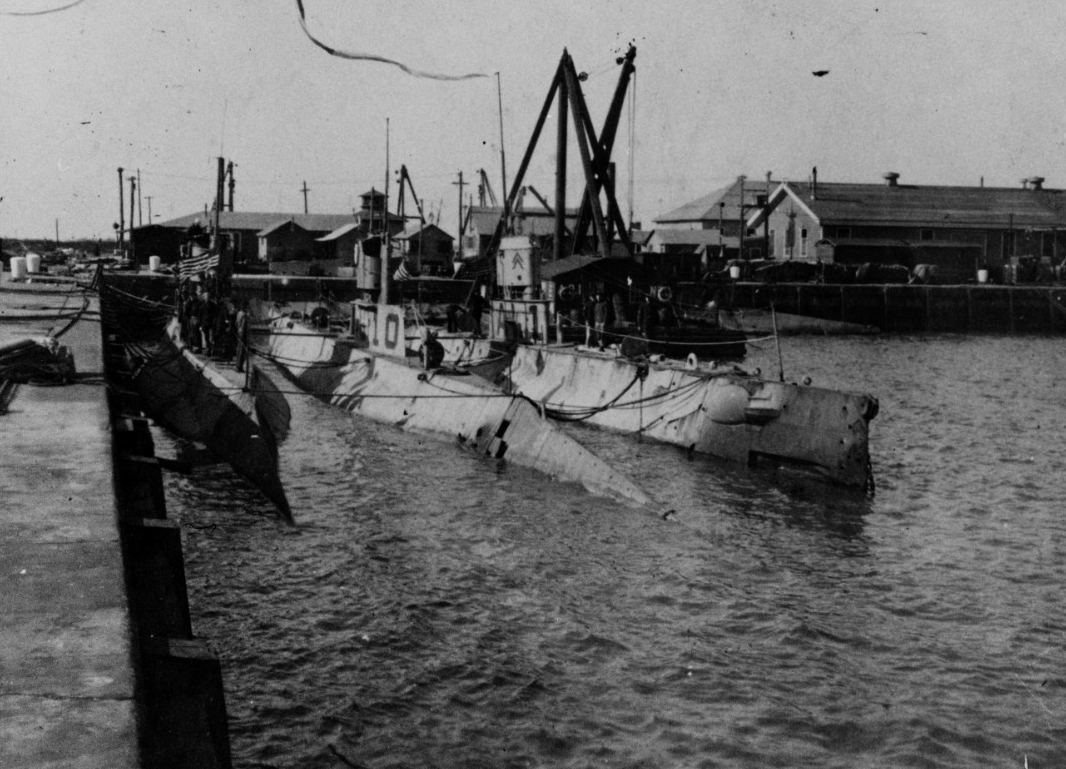 Caption: 1919 return to the U.S. from European waters. Note what appears to be a very long homeward bound pennant flying from the top of L-1's periscope. (Naval History and Heritage Command Photograph NH 51158)

L-1 transferred to the Submarine Base at Hampton Roads, Va., in late May 1919. Operating in the Chesapeake Bay and the waters off the Virginia capes, the submarine conducted a port visit to Baltimore, Md. in September 1919. While conducting training with L-2 on 22 September, L-1 was almost struck by Thomas (Destroyer No. 182) while submerged because L-2 failed to follow appropriate procedures indicating that submarines were operating submerged in the area. The following month, on 30 October, L-1 did collide with the steamer Northland in the waters around Hampton Roads, Va. A board of investigation was convened on 1 November and values of damage assessed. L-1 had another collision incident on 1 February 1921, when she was rammed by the pilot boat Philadelphia. The pilot boat towed the submarine into the Delaware Breakwater Harbor. The fleet tug Kalmia (AT-23) responded and took L-1 under tow. 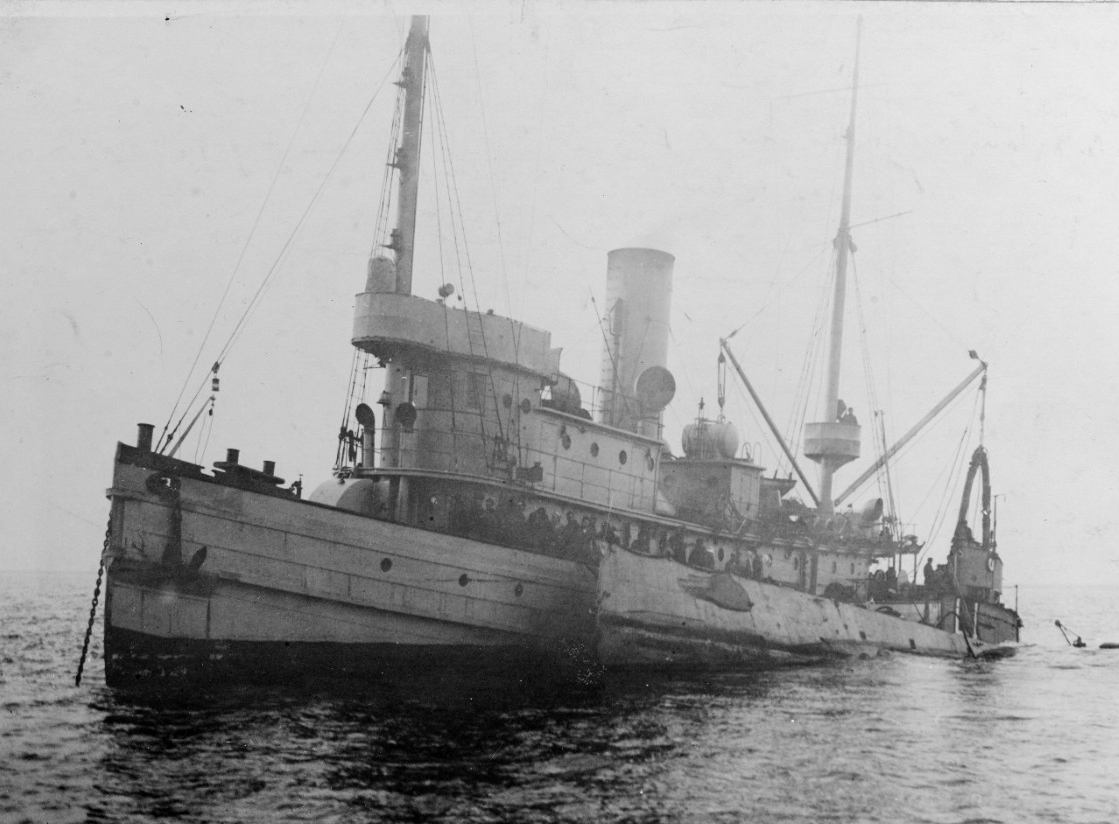 Caption: L-1 tied up alongside the fleet tug Kalmia (AT-23) off Lewes, Del., on 5 February 1921. L-1's after ballast tanks have been partially filled, raising her bow. (Naval History and Heritage Command Photograph NH 51164)