K-6 (Submarine No. 37) was laid down on 19 June 1912 at Quincy, Mass., by the Fore River Shipbuilding Co. under a subcontract from the Electric Boat Co., Groton, Conn.; launched on 26 March 1914; sponsored by Mrs. Thomas Gaines Roberts, wife of Naval Constructor Thomas G. Roberts; and commissioned on 9 September at the Boston (Mass.) Navy Yard, Lt. Joseph O. Fisher in command.

K-6’s initial assignment was to the Submarine Flotilla, Atlantic Fleet, on 14 September 1914. Several weeks later, that assignment changed to the 4th Division, Torpedo Flotilla, Atlantic Fleet, with the division’s standup on 4 October. She cleared the Boston Navy Yard on 16 November 1914. K-6 joined her division at Newport, R.I. later that day for shakedown and training. She moved to the Submarine Base at New London, Conn., on 19 November, and operated from there conducting training until 10 December. Getting underway that day, she proceeded to the New York Navy Yard, Brooklyn, N.Y., and entered the yard on the 11th, where she would remain into 1915.

K-6 cleared the yard on 19 January 2015 and proceeded on a southerly course. Initially bound for Hampton Roads, Va., the submarine arrived at Charleston, S.C. (23–26 January), before continuing her passage to Key West, Fla., where she arrived on 29 January. She remained until 5 February, when she stood out for the Gulf of Mexico. Transiting via Tampa, Fla. (6–7 February), the submarine continued on to Pensacola, Fla., where she arrived on 9 February; she then spent the succeeding weeks conducting training in the waters off the Florida panhandle. With those evolutions concluded, she cleared on 25 April and, transiting via Key West (29 April–1 May), reached the North River anchorage in the Hudson River off New York City, on 6 May. 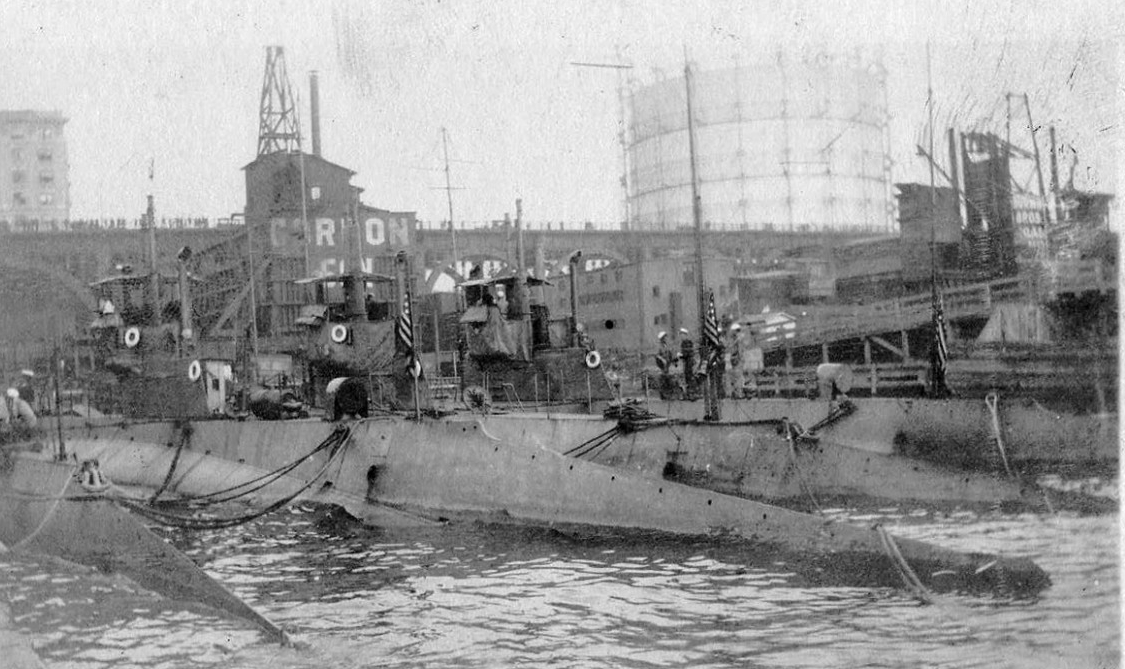 K-6 departed for maneuvers on 18 May 1915 before arriving at Newport on 27 May. She operated in the waters of Narragansett Bay until 20 June, when she departed for the New York Navy Yard. Reaching the following day, she entered the yard until 2 October. She cleared the yard and reached Newport on 3 October before departing for maneuvers (4–10 October). After returning to Newport on the 10th, she remained three weeks before departing on 31 October and making her return to the New York Navy Yard on 1 November, where she remained into January 1916.

K-6 stood out from the New York Navy Yard on 27 January 1916. Arriving at Charleston on 31 January, she shifted to and docked at the Charleston Navy Yard on 1 February. She remained there for a month, undocking on 1 march and clearing for a return to Pensacola. Touching at Key West (8–11 March), she reached Pensacola on 15 March. Much as she did the preceding year, K-6 conducted underwater warfare training with her fellow submarines off Pensacola. With the completion of that work, she departed on 26 April. Proceeding via Key West (28–30 April) and Hampton Roads (4–13 May), she stood in to the New York Navy Yard on 14 May. The submarine remained until 3 August, when she got underway and arrived at New London that same day. In succeeding days, she shifted to Newport, from whence she operated through 20 August. Getting underway for maneuvers, she then arrived at Cape May, N.J., on 28 August, before proceeding up the Delaware River in to the Philadelphia (Pa.) Navy Yard on 1 September.

The submarine cleared the Philadelphia Navy Yard on 3 September 1916. Arriving at Cold Spring Inlet, N.J., two days later, she operated off the New Jersey coast until returning to Philadelphia (12–16 September). Standing down the Delaware River on 16 September, she returned to New England waters touching at New London (18 August) and standing in to Newport on 24 August. After a return to New London for training, she cleared the Connecticut base on 30 October and stood in to the New York Navy Yard on 1 November. She departed the New York Navy Yard on 3 December and, after touching at the Delaware Breakwater; Hampton Roads; and Charleston, arrived at Key West on 22 December. 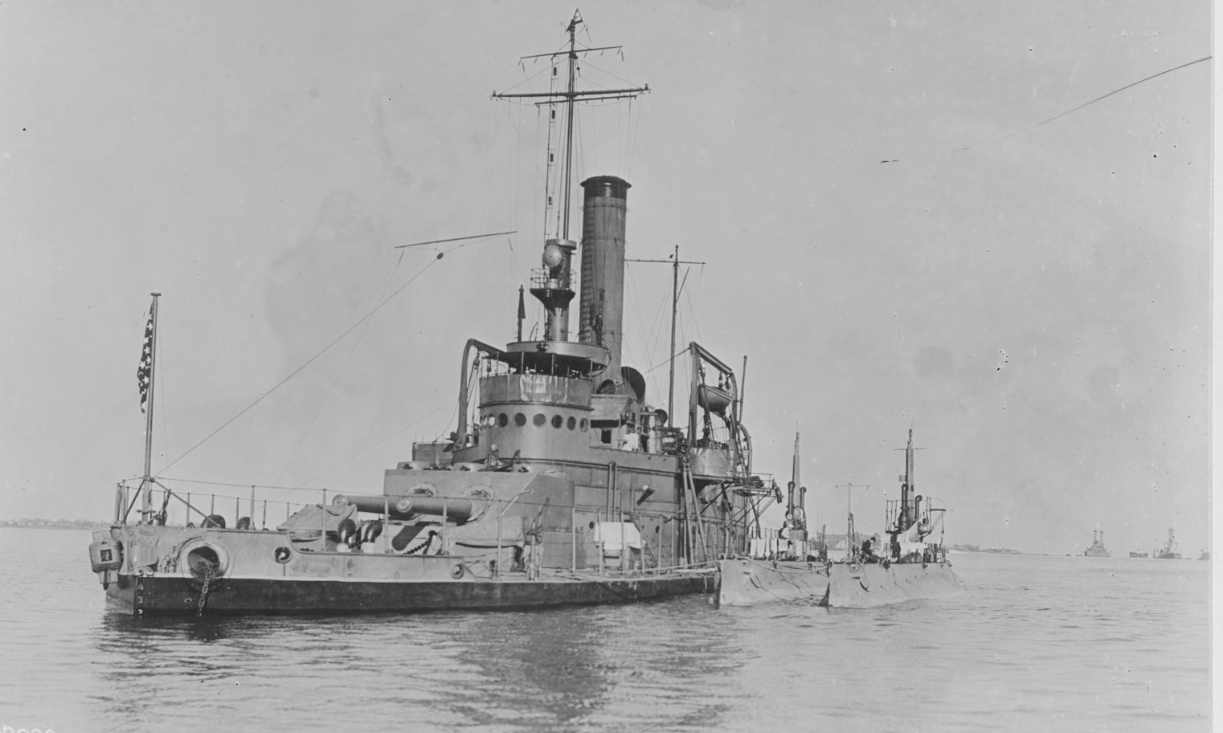 After a month of operating based from Key West, K-6 sailed on 22 January 1917 and reached the Dry Tortugas, Fla. (22–26 January), before returning to Key West on 27 January. Departing on 4 February for Pensacola, she transited via Tampa (5–11 February) and reached on 12 February. While on the Gulf Coast, the submarine made a visit to Mobile, Ala. (17–21 February) before returning to Pensacola on 21 February. For the next month she conducted training based from Pensacola until 27 March. 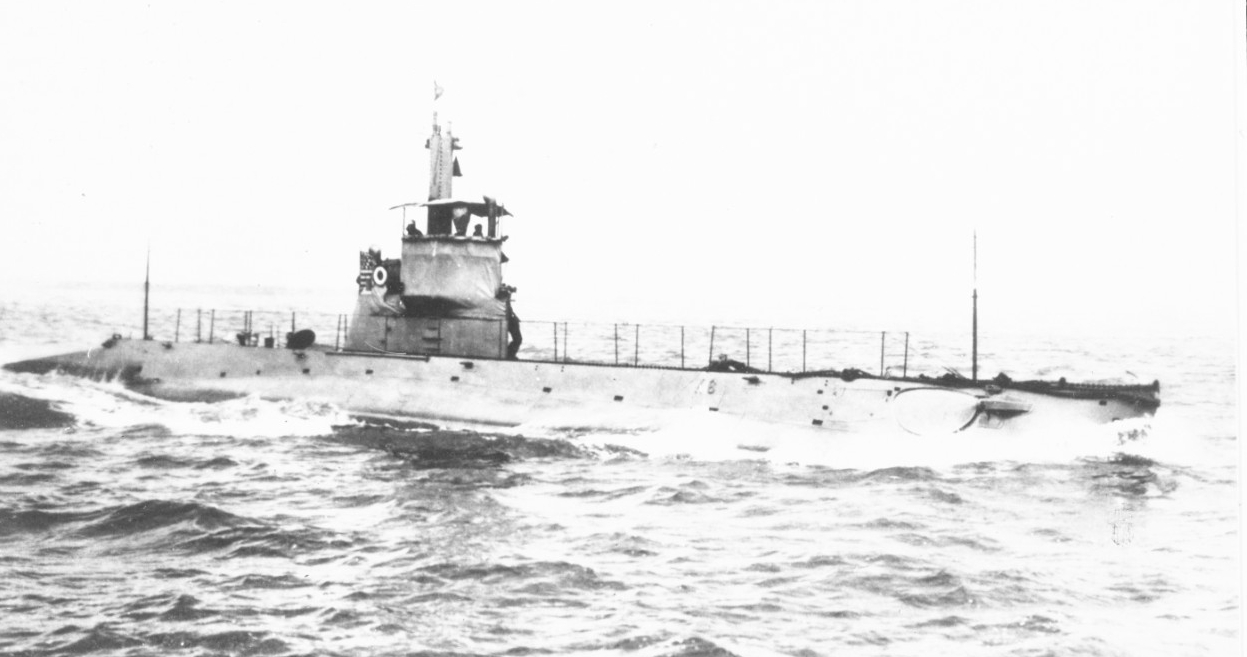 During this time, tensions between the U.S. and Imperial Germany had increased as a result of the latter’s resumption of unconditional submarine warfare on 1 February 1917. In light of this, the Atlantic Fleet was being consolidated in the waters of the Chesapeake Bay. K-6 sortied from Pensacola on 27 March bound for the Virginia capes. After touching at Key West (30–31 March), she reached Hampton Roads on 5 April. The following day, the U.S. declared war on Germany. The submarine departed Hampton Roads on 10 April and the next day arrived at the Ambrose Channel, entrance way to New York harbor. She then proceeded in to the New York Navy Yard (11–24 April) before making her return to New London on 24 April.

In June 1917, Vice Adm. William S. Sims, Commander, U.S. Naval Forces in European Waters, cited British success in using submarines as submarine hunter-killers in antisubmarine warfare (ASW). The Allied submarines, with their lower profiles, could approach U-boats more stealthily than larger surface patrol vessels. On 2 July, Adm. William S. Benson, Chief of Naval Operations, ordered the twelve most suitable submarines on the Atlantic coast be fitted out for duty in European waters. K-6 was selected for this duty and was fitted out for distant service at the Philadelphia Navy Yard. Upon completion of these modifications, she returned to the Submarine Base at New London (Base No. 22) and operated from that base.

K-6 departed New London, proceeding down the Thames River, on 12 October 1917, in company with Bushnell (Submarine Tender No. 2), K-1; K-2, and K-5. Passing through the Cape Cod Canal, the vessels rendezvoused with the protected cruiser Chicago (flagship Submarine Force, Atlantic Fleet) at Provincetown, Mass. The force stopped at Halifax, Nova Scotia (15–16 October) en route to the Azores, where it arrived at Ponta Delgada (Base No. 13) on the 27th. K-6 received orders to operate from Ponta Delgada and conduct patrol cruises of Azorean waters in conjunction with her sister K-boats and the yet to arrive E-1 (Submarine No. 24). These boats were designated the 4th Division, Submarine Flotilla, Atlantic Fleet, while the L-boats based in Ireland at Berehaven were designated the 5th Division. For the duration of the war, K-6 conducted a routine of patrol cruises to protect Allied shipping and to deny the use of the Portuguese archipelago as a base for U-boats or as a haven for German surface raiders. These patrols were to be interspersed with periods of refit, repairs, and replenishment.

K-6 began her patrols within weeks of her arrival. The submarine, during December 1917, was dispatched to Horta, Fayal, Azores, on the 15th, after a U-boat bombarded Funchal, Madeira, Azores (12 December). She operated with the converted yacht Margaret (S. P. 524). Her commanding officer, on 27 December, interviewed the survivors of the Portuguese brigantine Lidia sunk the preceding day by U-157 (Kapitänleutnant Max Valentiner commanding), in order to gather intelligence. At month’s end, she lay in port overhauling her engines and torpedoes. 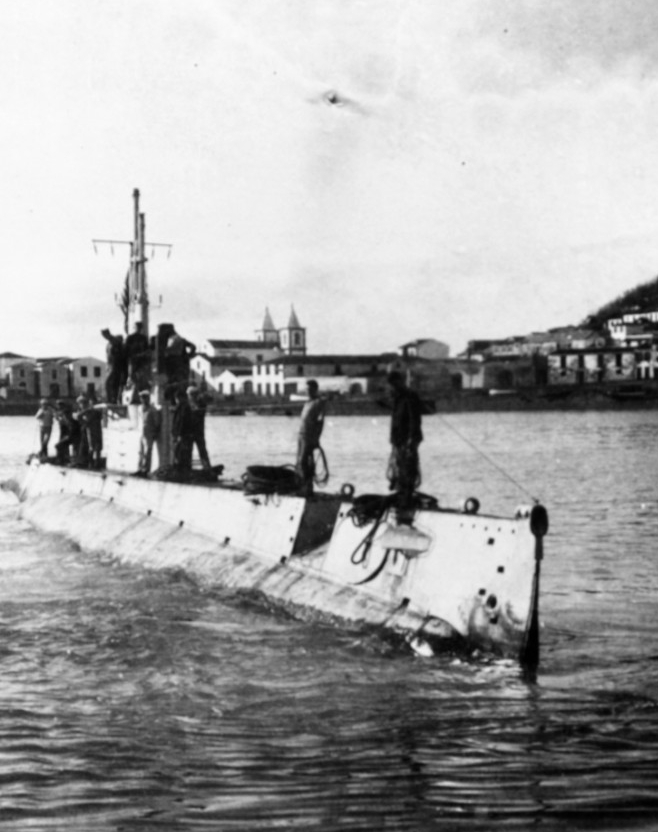 While patrolling off Galera Point on 1 February 1918, K-6 suffered damage to her rudders and propellers. After a time alongside Bushnell undergoing repairs, she returned to her patrol regimen. The submarine sortied in company with K-1 on 24 May for an offensive search of their designated patrol sector. K-6, however, was required to return to Ponta Delgada the following day due to mechanical breakdown as a result of striking bottom off the entrance to the harbor at Base 13. The incident prompted the convening of a board of investigation on 3 June on board the submarine tender Tonopah (Monitor No. 8) at Ponta Delgada. The board rendered an opinion that “no responsibility attaches to any individual for this grounding.” Shortly after those proceedings, however, the submarine changed commanders, and the boat spent the months following engaged in her patrol and maintenance routine until the Armistice of 11 November ended hostilities.

With war’s end, K-6 sailed for the United States on 21 November 1918 and arrived at the Philadelphia Navy Yard via Bermuda on 13 December. After post-deployment overhaul, K-6 proceeded to New London on 28 May 1919, to resume development of underwater warfare practices and conduct tactical operations along the New England coast. She was later assigned to a homeport at Key West. 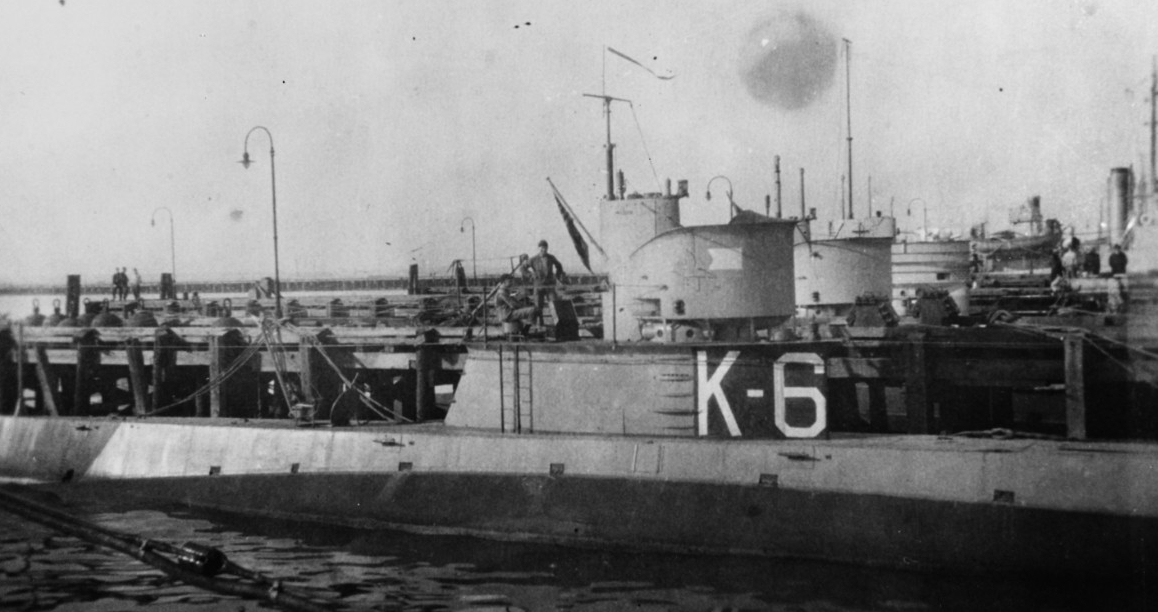 Operating along the Atlantic coast, K-6 trained prospective submariners, conducted experimental dives, and underwater maneuvers. She received orders on 21 June 1920, re-assigning the homeport of her division, Submarine Division Three, from Key West to Philadelphia. Four days later, on the 25th, that division was placed into an inactive status and on 7 July, all the submarines in the division were made available for all authorized yard work. While in this status, on 17 July 1920, K-6 was re-designated (SS-37) as part of a Navy-wide administrative re-organization. The division then received orders on 20 July, assigning them to the First Naval District to be based at Squantum, Mass., upon the completion of their yard work at Philadelphia. That assignment was subsequently changed on 15 January 1921, when she and the other K-boats were assigned to Submarine Base, Hampton Roads. In furtherance of these orders, the submarines were also reassigned from Division Three to Division Five.

K-6, on 9 May 1921, received orders assigning her to the Special Submarine Squadron, effective 15 May. During the following months, K-6 and the other submarines of the squadron conducted numerous experiments and maneuvers to improve the operational and tactical abilities of the submarine in the waters off New England and in the Chesapeake Bay. On 21 July, the submarine was forced to enter the Boston Navy Yard to undergo urgent repairs to her main motor. On 2 December, her assignment, as well as that of the other K-boats, to the Special Submarine Squadron was cancelled, and she reverted to her previous assignment in Division Five.

With orders dated 27 January 1922, K-6 and the other boats of Division Five reported to Commander, Submarine Base, New London. Arriving at Submarine Base, Hampton Roads from New London on 21 March 1923, K-6 decommissioned on 26 May. Subsequently, she was towed to Philadelphia on 13 November 1924. Stricken from the Navy list on 18 December 1930, she was sold on 31 January 1931 and scrapped by the purchaser on 3 June 1931.