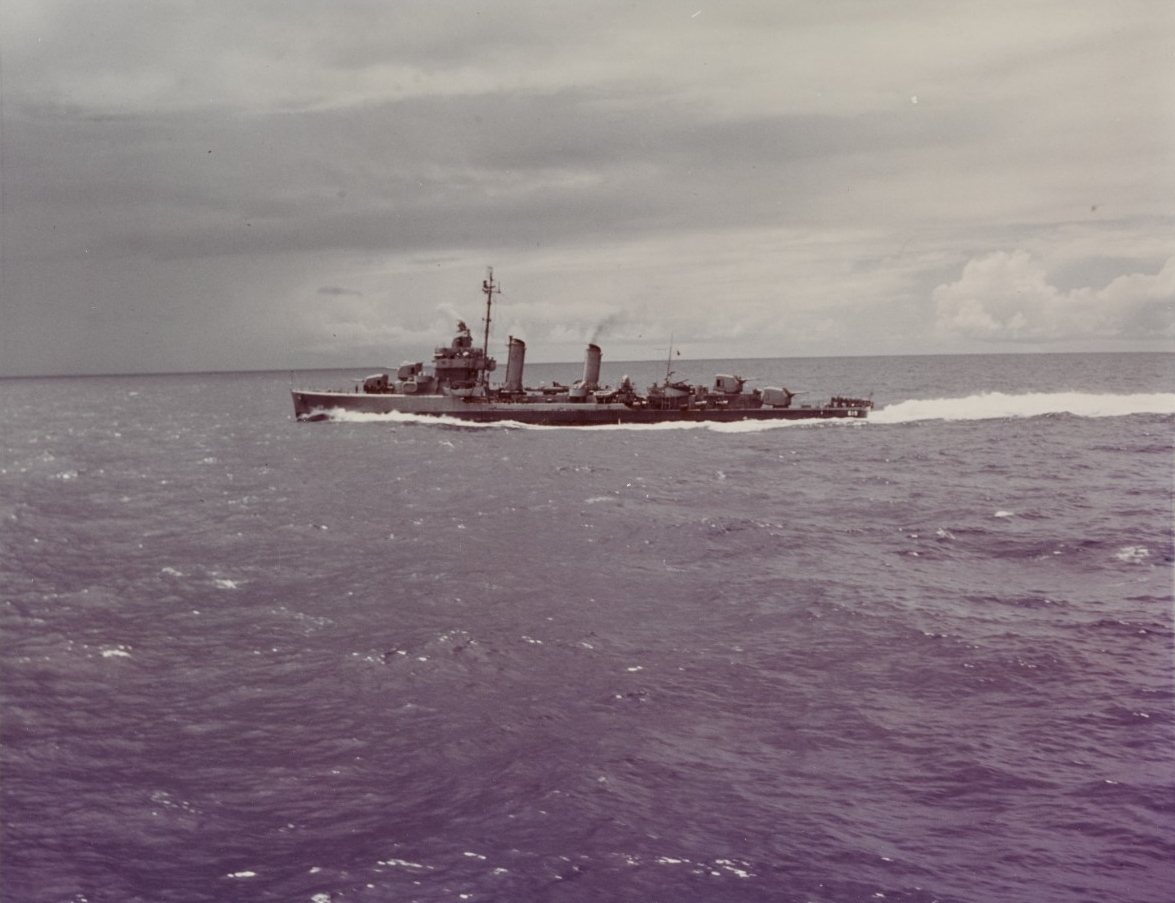 Edwards (DD-619) underway in the Caribbean Sea during her shakedown period, circa November 1942. Official U.S. Navy photograph, now in the collections of the National Archives. Catalog#: 80-G-K-15590

After brief service escorting convoys along the east coast and in the Caribbean, Edwards sailed from New York 8 November 1942 to join the Pacific Fleet. She joined TF 18 at Noumea 4 January 1943, to cover a large troop convoy bound for Guadalcanal. On 29 January they were attacked by a swarm of Japanese torpedo bombers off Rennell Island. Although most were driven off by the heavy accurate fire of the ships, enough broke through to put two torpedoes into Chicago (CA-29). Edwards with four other destroyers was detached to screen the damaged cruiser. On the following day, as the group sailed for Espiritu Santo, attacks continued. The destroyers put up a stout defense, but Chicago was torpedoed again and sank. Edwards rescued 224 of the 1,049 survivors. One of the other screening destroyers, La Vallette (DD-448), was also torpedoed; Edwards saw her safely to port before rejoining her task group.

Edwards returned to Pearl Harbor 27 March 1943 for overhaul, then set sail 15 April for the Aleutians. She saw action bombarding Attu 26 April, and as antiscreen for Pennsylvania (BB-38) during the landings of 11 May. The following day she teamed with Farragut (DD-348) for a relentless 10-hour depth charge attack on a submarine which attempted to torpedo the battleship. 1-31 was forced to the surface and badly damaged by Edwards' guns before diving, only to be sunk finally by Frazier (DD-607).

Edwards continued to ply stormy Aleutian waters on antisubmarine patrol. In June 1943 she joined the blockade patrol which bombarded Kiska Island 2 and 12 August, and covered the landings on the 13th. After overhaul, she returned to Espiritu Santo in October for training.

On 8 November 1943 Edwards sailed to screen carriers in air strikes on Rabaul on the 11th. A flight of Japanese planes attacked her task group at noon that day; Edwards and her companions drove off or splashed every plane before it could injure any American ship. She screened the support force at Tarawa from 19 November, then escorted transports to Pearl Harbor on route to the west coast for a brief overhaul. On 3 March 1944 she arrived at Majuro off which she patrolled as well as screening strikes on Mili Atoll in the Marshalls and in the Palaus by carriers of the mighty 5th Fleet. In April she guarded the flattops as they launched air attacks on New Guinea in coordination with the Hollandia landings. Edwards also figured in the attack on Truk of 29 and 30 April.

From 12 May to 18 August 1944 Edwards' destroyer division formed the Eastern Marshalls Patrol Group. They patrolled off the Japanese-held atolls of Mili, Jaluit, Maloelap, and Wotje to keep the enemy from receiving assistance or evacuating. On 22 May she joined Bancroft (DD-598) to put several enemy batteries on Wotje out of action. Again off Wotje 27 June she ignored shore fire to rescue downed aviators drifting toward shore.

After overhaul in Pearl Harbor in August 1944, the veteran Edwards reported arrival at San Pedro Bay, Leyte, 30 October for patrol. She joined the assault force for the landings at Ormoc 7 December. Here she splashed several of the hard hitting air attackers as well as aiding ships they had damaged. A resupply echelon to Ormoc met similar opposition but drove off the planes and got the convoy through. On 11 December, she took aboard casualties from Caldwell (DD-605), set on fire by a suicide plane.

The doughty battle-hardened Edwards remained in the Philippines, shepherding supply convoys through to Mindoro, Lingayen Gulf, Polloc Harbor, and Davao Gulf. On 9 May 1945 she arrived at Morotai to distinguish herself during the invasion of Borneo, returning to Subic Bay 12 July. She made one voyage to Iwo Jima, another to Okinawa to escort convoys, then sailed 16 September for the States. On 7 January 1946, Edwards arrived at Charleston, S.C., where she was placed out of commission in reserve 11 April 1946. 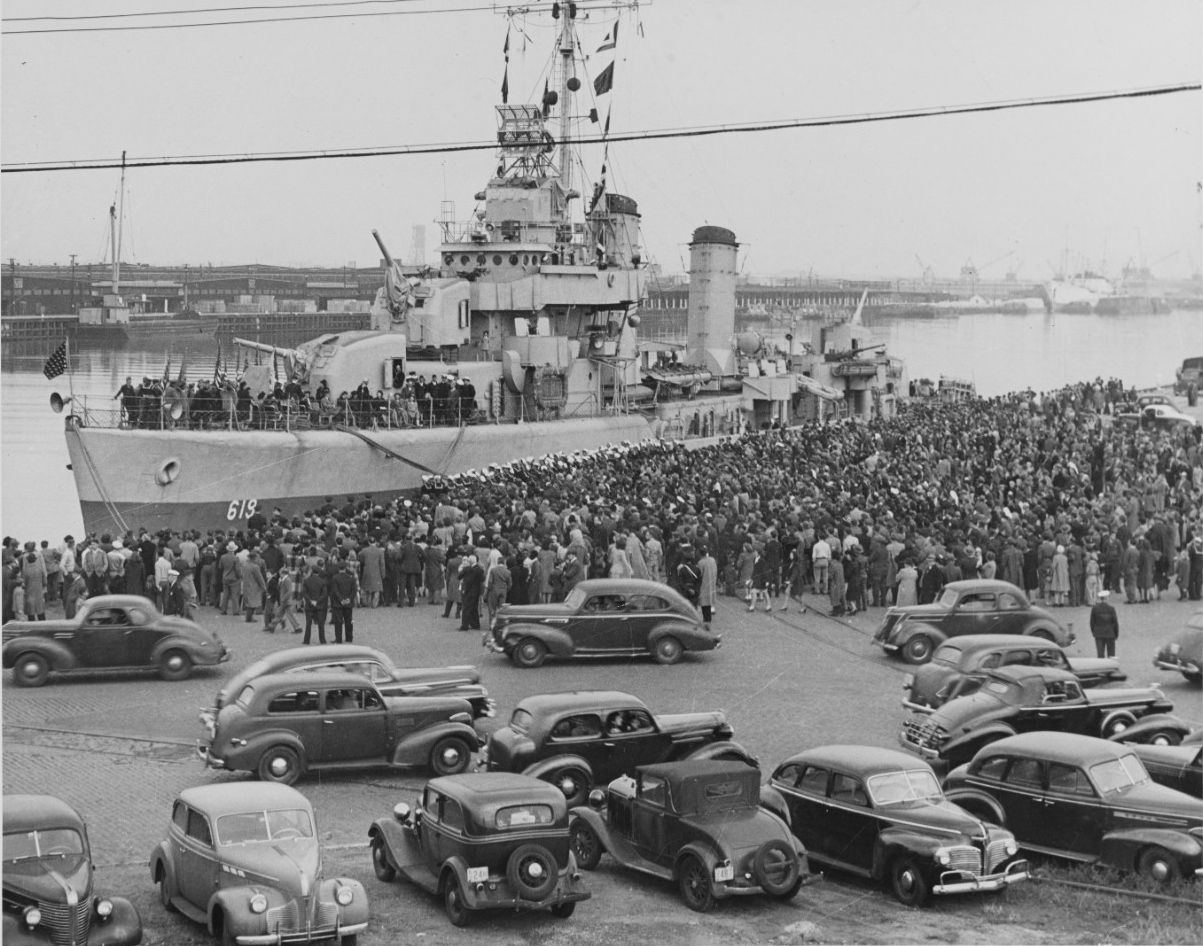 Edwards (DD-619) at Port Newark, New Jersey on 27 October 1942 or 27 October 1945 with a large crowd on board and nearby for Navy Day ceremonies. Photographed by the U.S. Steel Corporation. U.S. Naval History and Heritage Command Photograph. Catalog#: NH 98119