John Robert Monaghan, born on 26 March 1873 in Chawelah, Wash., his parents were James and Margaret (McCool) Monaghan. His parents desired to give him superior educational advantages under the auspices of the church to which they belonged, but the facilities for Catholic instruction were limited in Washington in those days, so that the boy at the age of eleven was sent to the school of the Christian Brothers -- St. Joseph Academy, at Oakland, Calif. He attended that school and also another brothers' school in Portland, Ore., until the Jesuit Fathers established Gonzaga College in Spokane in 1887.

Monaghan then enrolled as one of the first eighteen students and after four years spent in that institution, he took the examination held in Spokane in 1891 for the Military Academy at West Point and the Naval Academy at Annapolis, receiving the highest percentage in each of these examinations, so that he was entitled to make his choice of appointments. Although it was his original wish to go to West Point, he generously waived that preference in favor of the next applicant, the son of an old Army officer who heartily desired the appointment. He received his appointment to the Naval Academy on 7 September 1891. Classmates wrote "I've got a drop of the Irish blood in me mesilf," as a nod to his ancestry, and he played baseball at the Academy, on both the class team (1892, 1893 and 1894), and on the Academy nine (1892 and 1894), playing right field during the 1894 season. He graduated in June 1895, the first from the state of Washington to graduate from the Naval Academy.

As a passed midshipman he served on board the cruiser Olympia (Cruiser No. 6), flagship of the Asiatic Station. He was promoted to ensign in July 1897 and was assigned to the monitor Monadnock and the gunboat Alert. He was later transferred to the cruiser Philadelphia (Cruiser No. 4), flagship of the Pacific Station in July 1898. Calling at Apia, Samoa, on 6 March 1899, Philadelphia encountered an unstable political climate, created by rival native factions and spurred on by German intrigue, which soon erupted into open hostility.

During a combined reconnaissance of Americans, British, and Samoans near Apia on 1 April 1899, the American detachment, from Philadelphia, under the command of Lt. Philip V. Lansdale, came under fire from hostile rebel Samoans under Chief Mataafa "which it was impossible to withstand”. During the ensuing retreat, Lansdale fell, wounded, as he attempted to cover the retreat with a machine gun. Monaghan seized a rifle "from a disabled man [to make] a brave defense." The Samoans rushed them. Ensign Monaghan, one observer later wrote, "stood steadfast by his wounded superior and friend; one rifle against many, one brave man against a score of savages. He knew he was doomed. He could not yield. He died in heroic performance of duty..."

The remains of Ensign Monaghan were brought back to the United States on Philadelphia and interred in Spokane, where every honor was paid his memory. On 25 October 1906, a bronze statue was unveiled in Spokane, by his sister, Agnes, which was given by the citizens of the state of Washington. 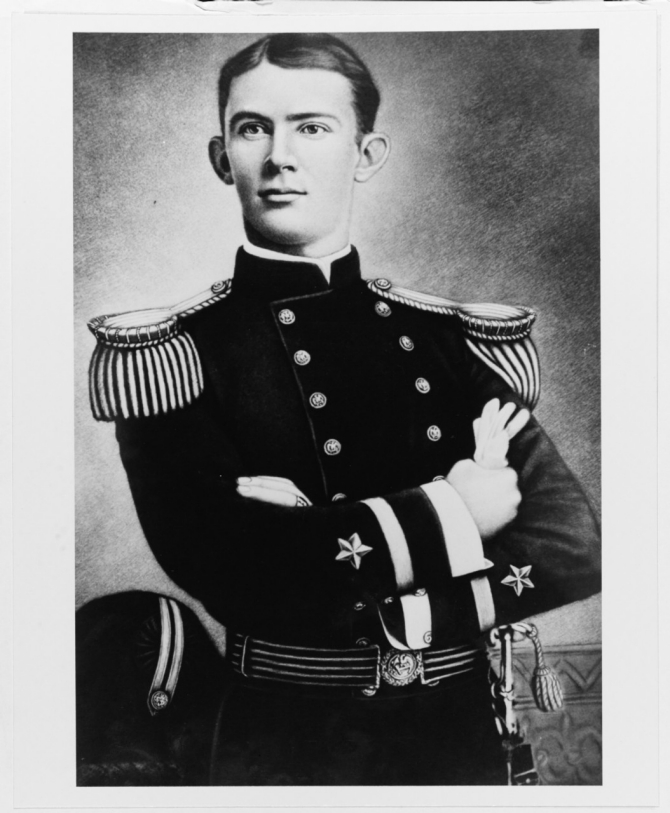 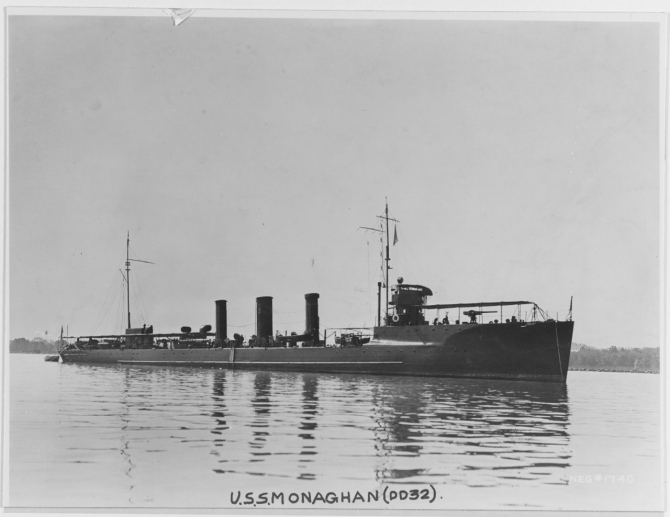 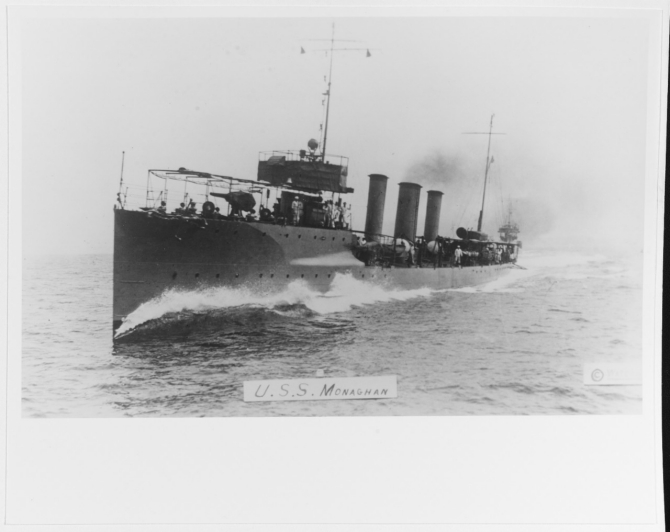 Monaghan photographed while underway prior to World War I by Waterman. Courtesy of Jack L. Howland, 1983. (Naval History and Heritage Command, NH 95195) 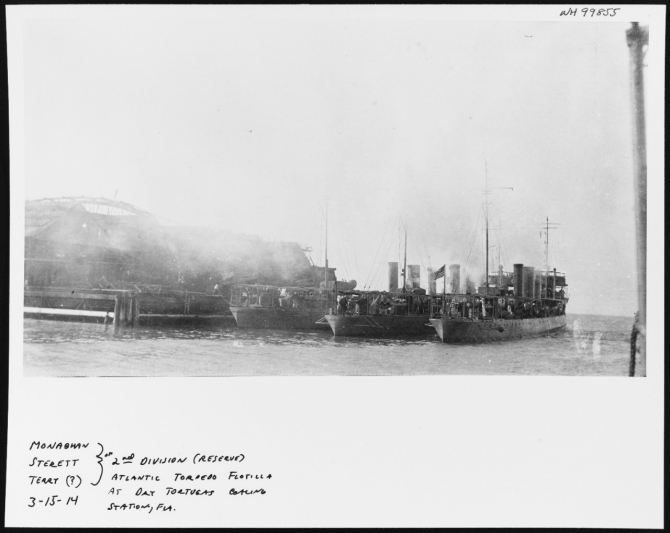 Destroyers coaling at Dry Tortugas, Fla., 15 March 1914. Members of the Second Division, U.S. Atlantic Fleet Torpedo Flotilla, these ships are (from left to right): Monaghan (Destroyer No. 32); Sterett (Destroyer No. 27); and (perhaps) Terry (Destroyer No.25). This photo is one of a series from the collection of Walke (Destroyer No.34) crewmember, which was another member of the division. Courtesy of Jim Kazalis, 1981. (Naval History and Heritage Command, NH 99855)

Upon her commissioning, Monaghan joined the Atlantic Fleet’s Torpedo Flotilla. She operated as a member of the 4th Group of the Torpedo Flotilla along the Atlantic coast, principally out of Newport, R.I., and in the Chesapeake Bay area. Each winter found her with the fleet training in Cuban waters. On 5 November 1913, she was placed in reserve at the Charleston (S.C.) Navy Yard as a constituent of the 2nd Division of the Reserve Torpedo Flotilla. By 1 January 1916, she maintained a reduced complement in the 2nd Division. On 25 March 1916, Monaghan collided with Roe (Destroyer No. 24) prompting the convening of a board of investigation on 27 March 1916. On 12 December, in company with Sterett (Destroyer No. 27), Monaghan stood out of Jacksonville, Fla. bound for New Orleans. After stops at Savannah, Ga. (12–17 December), Key West, Fla. (18–19 December), Mobile, Ala. (20–21 December), she arrived at her destination on 22 December.

By 1 January 1917, as the likelihood of hostilities against Imperial Germany increased, the destroyers had been re-organized into the three flotillas of the Atlantic Fleet Destroyer Force. Monaghan, no longer in reserve status, was a member of Flotilla 1, Division 2 along with Roe, Walke, (Destroyer No. 34), Sterett, and Terry (Destroyer No. 25) with Perkins (Destroyer No. 26), in reserve. On 15 January, Monaghan, along with Sterett and Lamson (Destroyer No. 18), received orders from Chief of Naval Operations to make port calls in several Gulf coast cities for the purposes of recruitment. These stops included Lutcher, La. (7–9 February), New Orleans, La. (9–22 February), Morgan City, La. (22–27 February), Port Arthur, Texas (27 February–5 March), Beaumont, Texas (5–12 March), Galveston, Texas (12–23 March), Houston, Texas (23 March–2 April), with a return to New Orleans on 4 April. On 20 March, Monaghan received orders to proceed immediately to Key West.

With the declaration on war against Germany on 6 April 1917, Monaghan arrived at Key West, and was attached to the Patrol Force, Atlantic Fleet. She conducted patrol and escort duty along the Atlantic coast until 3 May, when she entered the Charleston (S.C.) Navy Yard for fitting out for distant service. On 1 July, the destroyer received orders from Commander Division Six, Battleship Force, to escort New York (Battleship No. 34).

In August and October 1917, she made two trips as an ocean escort for troop transport convoys to the mid-ocean destroyer rendezvous. On 13 November, Monaghan and Roe accompanied San Diego (Armored Cruiser No. 6), the flagship for Troop Convoy Group Eleven, on her first voyage to France. They transited the Atlantic escorting the ex-German ships, now troop transports, Powhatan (Id. No.3013) and President Lincoln. The convoy arrived at Quiberon Bay on 20 November, the ships moved on to St. Nazaire, France on 26 November. The next day, Monaghan, along with Roe, arrived at Brest, France. Under the authority of Vice Adm. Henry B. Wilson, Commander, U.S. Naval Forces in France, the destroyer operated from that port conducting antisubmarine patrols and convoy escort duties against German U‑boats in European waters.

On 28 November 1917, Monaghan and Roe left Brest and escorted troop transport Von Steuben (Id. No. 3017) -- the former Kronprinz Wilhelm -- about 450 miles and then returned to Brest the next day. Having weathered a gale for several days while escorting troop and store ships off Finisterre, France, Monaghan, Roe, and Warrington (Destroyer No. 30), returned to Brest on 19 December. Monaghan had lost her foremast and Roe her mainmast. Both vessels also lost boats while Warrington lost her life rafts.

Into 1918, Monaghan continued to conduct convoy escorts based out of Brest, typically in company with Roe. On 24 May, the destroyer received orders to proceed to Chatham, U.K for docking and refit. Upon completion of this maintenance availability, Monaghan returned to Brest and continued her escort and patrolling duties. With the Armistice on 11 November, the Navy began to schedule destroyers to return, in groups, to the United States. First the coal-burning destroyers were dispatched, followed by those fueled with oil. On 28 December 1918, three days after Christmas, Monaghan, in company with the oil-burning Nicholson (Destroyer No. 52), Jarvis (Destroyer No. 38), and Winslow (Destroyer No. 53), departed France, bound for home.

On 1 January 1919, Monaghan departed the Azores en route to Bermuda and on 3 January received orders to proceed to the Charleston Navy Yard upon her return to the United States. Monaghan was decommissioned at the Philadelphia Navy Yard on 4 November 1919, and while inactive was re-designated DD-32 during the assignment of alphanumeric identificatiom numbers on 17 July 1920.

On 7 June 1924, Monaghan transferred to the Treasury Department, one of thirty-one Navy destroyers intended for service in the U.S. Coast Guard in the enforcement of Prohibition (18th Amendment). Adapting these vessels to this mission was thought to be less costly than building new ships. In the end the rehabilitation of the vessels became a saga in itself because of the exceedingly poor condition of many of the war-weary ships. It took nearly a year to remove the installed antisubmarine warfare equipment and rehabilitate these vessels to bring them up to seaworthiness. Additionally, the destroyers were by far the largest and most sophisticated vessels ever operated by the Coast Guard and trained crewmen were nearly non-existent. As a result, Congress subsequently authorized hundreds of new enlisted billets. It was these inexperienced recruits that generally made up the destroyer crews. Capable of well over 25 knots, seemingly an advantage in the interdicting of rumrunners, she was easily outmaneuvered by smaller vessels. The destroyer’s mission, therefore, was to picket the larger supply ships ("mother ships") on Rum Row and prevent them from off-loading their illicit cargo onto the smaller, speedier contact boats that ran the liquor into shore.

Monaghan, re-designated CG-15, was among the first group of destroyers to enter Coast Guard service when she was commissioned at the Philadelphia Navy Yard on 30 June 1925, Lt. Cmdr. Wales A. Benham commanding. She was assigned to Division 3, stationed at New York where she was to report by dispatch to the Commander, Destroyer Force, Coast Guard Cutter Redwing, New London, Conn., for further instructions.

Ordered to New London, Conn., on 22 May 1926, she arrived at her destination on 10 July. She operated off the eastern seaboard of the United States between New London and St. Petersburg, Fla. Monaghan won the USCG Gunnery Trophy for Destroyers for 1927–1928. She was the only 742-tonner “flivver” to do so. On 10 March 1928, she was designated a member of Division 4 by the Special Patrol Force to be based at the Charleston Navy Yard. Interestingly, the ship’s gunnery performance fell off to fourth in 1928–1929 and sixteenth (of 19) in 1929–1930.

She was detached from Division 4 and transferred to the Boston, Mass.-based Division 3 on 1 June 1930. Monaghan ultimately returned to Philadelphia on 1 November 1930 and detached from the Destroyer Force. She decommissioned there on 29 January 1931 and later returned to the Navy Department on 8 May 1931.

The Navy dropped the name Monaghan on 1 July 1933, so that it might be assigned to a new construction destroyer. DD-32, as the ship was subsequently known, was stricken from the Naval Vessel Register on 5 July 1934. She was then sold to Michael Flynn of Brooklyn, N.Y., on 22 August 1934 for scrapping in accordance with the London Treaty limiting naval armament.