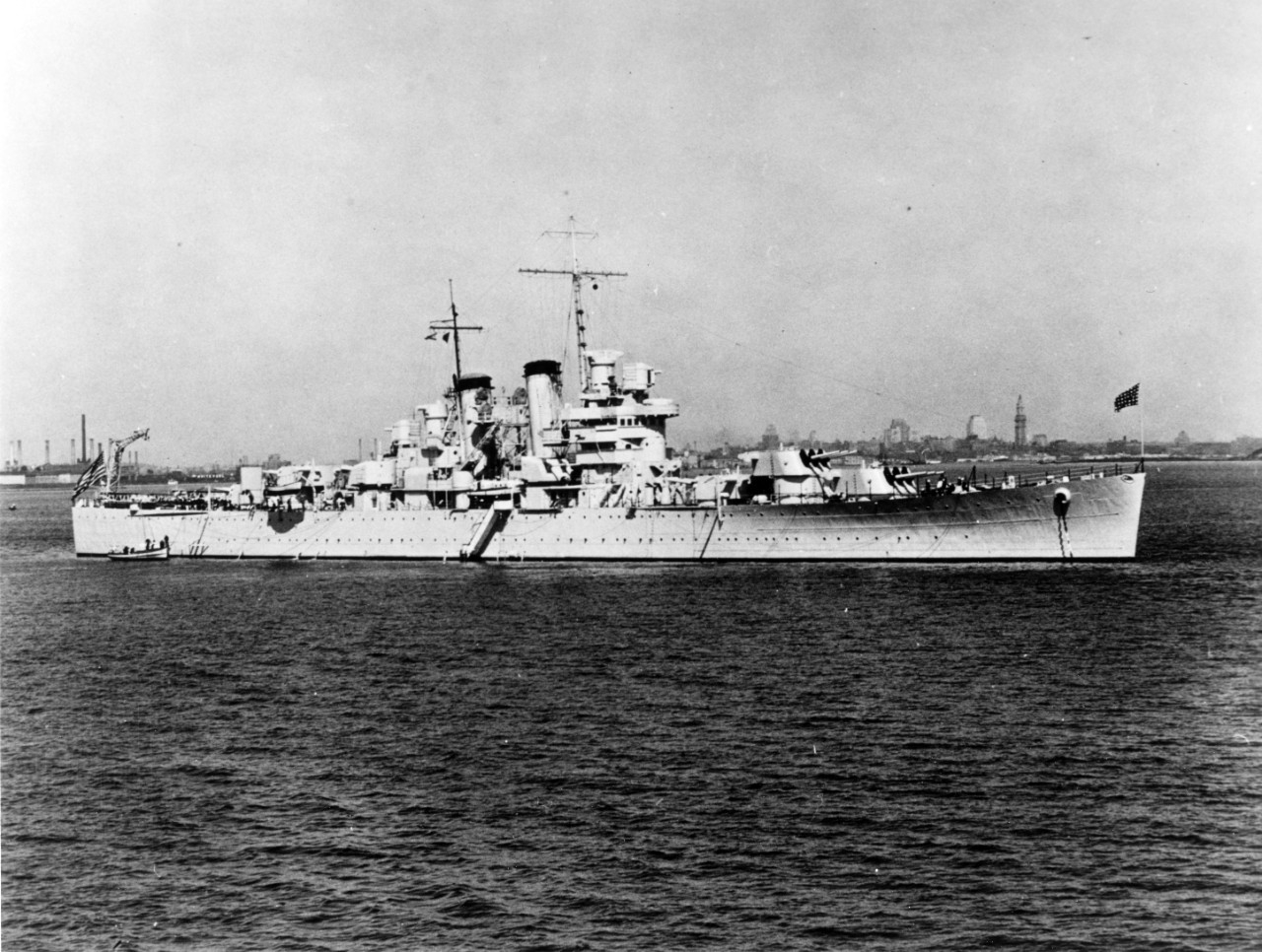 In following the direction of Resolution VII, signed 3 March 1819 during the second session of the Fifteenth Congress of the United States, which stated that U.S. Navy ships of the "third class" be named "after the principle cities and towns," the gunboat and two cruisers were each named for Helena, capital city of Montana.

Helena, assigned to the Pacific Fleet, was at Pearl Harbor on 7 December 1941, when the Japanese attacked. She was moored at 1010 Dock Navy Yard on the east side of the harbor; outboard was mine layer Oglala (CM-4)By chance Helena was in the berth normally assigned to Pennsylvania; and this became a prime target for the Japanese planes.

Within 3 minutes of the time the first bomb of the attack fell on Ford Island, a lone torpedo plane launched a torpedo that passed under Oglala, and hit Helena on the starboard side almost amidships, just as the crew raced to battle stations. One engine room and one boiler room were flooded. Wiring to the main and 5-inch batteries was severed, but prompt action brought the forward diesel generator up within 2 minutes, making power available to all mounts. Immediately, they sent up a heavy fire that keep her free of further damage. Outstanding damage control work, and the fact that watertight integrity was promptly insured by the closing of the doors and hatches throughout the ship, kept Helena afloat. Many times later she gave the Japanese occasion to regret their failure to sink her that first day of the war.

After preliminary overhaul at Pearl Harbor, Helena steamed to Mare Island Navy Yard for permanent repairs. In 1942, she sailed to enter action, escorting a detachment of SeaBees and an aircraft carrier rushing planes to the South Pacific. She made two quick dashes from Espiritu Santo to Guadalcanal, where the long and bloody battle for the island was then beginning, and having completed these missions, joined the Task Force formed around Wasp (CV-7).

This Task Force steamed in distant support of six transports carrying Marine reinforcements to Guadalcanal. On 15 September 1942, in mid-afternoon Wasp was suddenly hit by three Japanese torpedoes. Almost at once, she became an inferno. Helena, her guns blazing, stood by to rescue nearly 400 of Wasp's officers and men, whom she took to Espiritu Santo.

Helena's next action was near Rennell Island, again in support of a movement of transports into Guadalcanal. Air attacks from Henderson Field had slowed down the Tokyo Express for several days, so 11 October 1942 the Japanese poured everything they could deliver against the airstrip, hoping to neutralize air operations long enough to bring heavy troop reinforcements during the night. The Japanese fleet closed and by 1810 was less than 100 miles from Savo Island.

Helena, equipped with superior radar, was first to contact the enemy and first to open fire at 2346. When firing had ceased in this Battle of Cape Esperance in Iron Bottom Sound, Helena had sunk cruiser Furutaka and destroyer Fubuki.

Helena was next under attack on the night of 20 October 1942 while patrolling between Espiritu Santo and San Cristobal. Several torpedoes exploded near her but she was not hit. She later participated in a bombardment near Koli Point, Guadalcanal, on 4 November.

Helena saw the climatic Naval Battle of Guadalcanal from its beginning when she was assigned the job of escorting a supply echelon from Espiritu Santo to Guadalcanal. The ship made rendezvous with the convoy of transports off San Cristobal 11 November 1942, and brought it safely into Guadalcanal. During the afternoon of 12 November, word came from a coast watcher, "enemy aircraft approaching." Immediately suspending unloading operation, all ships stood out to form an antiaircraft disposition. When the attack came, superb maneuvering of the force, and its own antiaircraft fire, broke up the first attack but the second damaged two ships. Helena came through without a scratch, and the task group brought down eight enemy planes in the 8-minute action.

As unloading resumed, an increasing stream of reports flowed in from patrolling aircraft. Ominously, the Japanese forces sighted contained no transports, and their intention was thus read as one of being pure offense. Helena, still steaming with Rear Admiral Daniel Callaghan's Support Group, aided in shepherding the transports away from Guadalcanal, then reversed course to fateful "Ironbottom Sound." The night of Friday, 13 November, Helena's radar first located the enemy. In the action that followed, the tropical night was lit again and again by the flashes of her big guns. She received only minor damage to her superstructure during the action. Daylight found a tragic scene in the grisly slot. The weaker American fleet had achieved the goal at heavy cost. Great valor had turned back the enemy and prevented the heavy attack that would have been disastrous to the Marine troops ashore.

Helena found a measure of revenge when she was assigned to the several bombardments of Japanese positions on New Georgia during January 1943. Her guns rocked the enemy at Munda and Vila Stanmore, leveling vital supply concentrations and gun emplacements. Continuing on patrol and escort in support of the Guadalcanal operation through February, one of her float planes shared in the sinking of Japanese submarine I-18 11 February 1943. After overhaul in Sydney, Australia, she was back at Espiritu Santo in March to participate in bombardments of New Georgia, soon to be invaded. The first goal on New Georgia proper was Rice Anchorage. In the force escorting the transports carrying the initial landing parties, Helena moved into Kula Gulf just before midnight 4 July, and shortly after midnight on the 5th, her big guns opened up in her last shore bombardment. 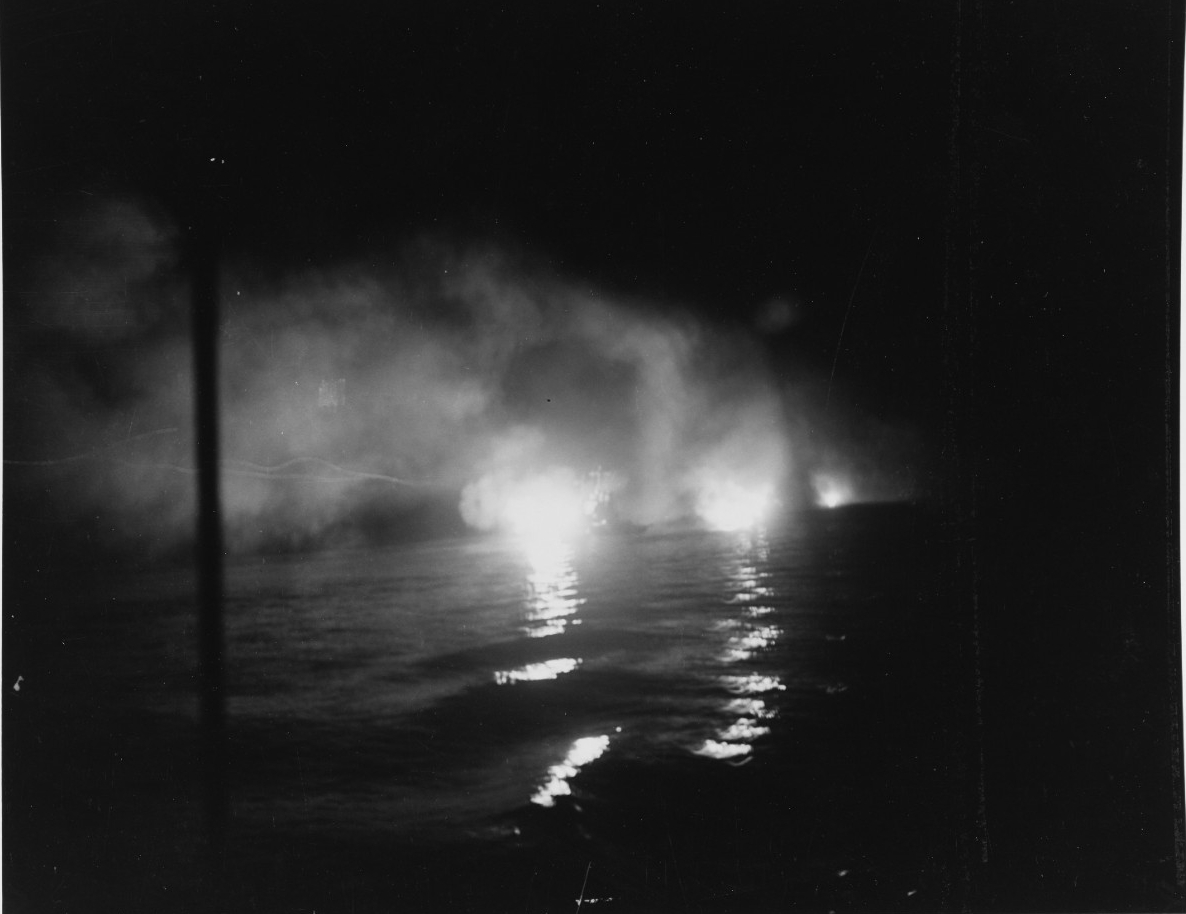 Helena (CL-50), in the center, firing during the Battle of Kula Gulf, just before she was torpedoed and sunk. The next ship astern is Saint Louis (CL-49). Photographed from Honolulu (CL-48). Official U.S. Navy photograph now in the collections of the National Archives, 80-G-54553.

The landing of troops was completed successfully by dawn, but in the afternoon of 5 July 1943, word came that the Tokyo Express was ready to roar down once more and the escort group turned north to meet it. By midnight 5 July, Helena's group was off the northwest corner of New Georgia, three cruisers and four destroyers composing the group. Racing down to face them were three groups of Japanese destroyers, a total of ten enemy ships. Four of them peeled off to accomplish their mission of landing troops. By 0157 Helena began blasting away with a fire so rapid and intense that the Japanese later announced in all solemnity that she must have been armed with 6-inch machine guns. Ironically, Helena made a perfect target when lit by the flashes of her own guns. Seven minutes after she opened fire, she was hit by a torpedo; within the next 3 minutes, she was struck by two more. Almost at once she began to jackknife. Below, she was flooding rapidly even before she broke up. In a well-drilled manner, Helena's men went over the side.

Helena's history closes with the almost incredible story of what happened to her men in the hours and days that followed. When her bow rose into the air after the sinking, many of them clustered around it, only to be fired on there. About a half hour after she sank, two American destroyers came to the rescue.

At daylight, the enemy was in range once more, and again the destroyers, Nicholas (DD-449) and Radford (DD-446), broke off their rescue operations to pursue. Anticipating an air attack, the destroyers withdrew for Tulagi, carrying with them all but about 275 of the survivors. To those who remained they left four boats, manned by volunteers from the destroyers' crews. Capt. Charles P. Cecil, Helena's commanding officer, organized a small flotilla of three motor whaleboats, each towing a liferaft, carrying 88 men to a small island about 7 miles from Rice Anchorage after a laborious all-day passage. This group was rescued the next morning by Owin (DD-433) and Woodworth (DD-460).

For the second group of nearly 200, the bow of Helena was their liferaft, but it was slowly sinking. Disaster was staved off by a Navy Liberator that dropped lifejackets and four rubber lifeboats. The wounded were placed aboard the lifeboats, while the able-bodied surrounded the boats and did their best to propel themselves toward nearby Kolombaranga. But wind and current carried them ever further into enemy waters. Through the torturous day that followed, many of the wounded died. American search planes missed the tragic little fleet, and Kolombaranga gradually faded away to leeward. Another night passed, and in the morning the island of Vella Lavella loomed ahead. It seemed the last chance for Helena's men and so they headed for it. By dawn, survivors in all three remaining boats observed land a mile distant and all who were left were safely landed. Two coastwatchers and loyal natives cared for the survivors as best they could, and radioed news of them to Guadalcanal. The 165 sailors then took to the jungle to evade Japanese patrols.

Surface vessels were chosen for the final rescue, Nicholas and Radford, augmented by Jenkins (DD-447) and O'Bannon (DD-450) set off 15 July 1943 to sail further up the Slot than ever before, screening the movement of two destroyer-transports and four other destroyers. During the night of 16 July, the rescue force brought out the 165 Helena men, along with 16 Chinese who had been in hiding on the island. Of Helena's nearly 900 men, 168 had perished.

Helena was the first ship to receive the Navy Unit Commendation. Her actions in the Battles of Cape Esperance, Guadalcanal, and Kula Gulf were named in the citation. Helena also earned the Asiatic-Pacific Area Campaign medal with seven stars.