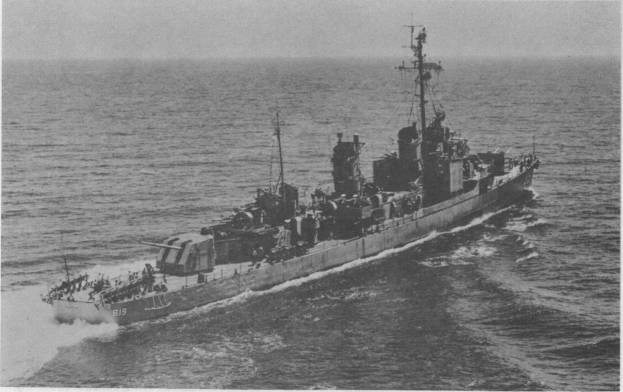 Randolph Mitchell Holder was born 20 September 1918 in Jackson, Miss., and was commissioned Ensign 10 April 1940 following flight training. Reporting to Torpedo Squadron 6 in the famous carrier Enterprise, he took part in the early carrier operations in the critical months following Pearl Harbor and then fought in the pivotal Battle of Midway, first of the great American successes in the sea war. In the gallant attack of the torpedo planes early 4 June 1942, Holder and his comrades attacked the Japanese ships without fighter cover. Though Holder and many others were shot down while pressing this attack, they forced radical maneuvers and diverted Japanese air cover so as to make the later raids lethal to the enemy fleet. Lieutenant (j.g.) Holder was presumed dead next day, 5 June 1942, and was awarded the Navy Cross posthumously for his heroism.

Holder conducted her shakdown training in the Caribbean and returned to Norfolk 28 August 1946. After a period of training exercises along the coast she sailed for the Mediterranean 23 October. During the subsequent operations with the 6th Fleet in this troubled area, Holder visited Egypt and Saudi Arabia, arriving Newport 22 March 1947. She then took part in antisubmarine training exercises out of Newport and in the Caribbean.

The destroyer continued this pattern of operations for the years that followed. In June-July 1949 Holder took part in a Midshipman training cruise to northern Europe and upon her return moved her home port from Newport to Norfolk. Her classification was changed to DDE-819 4 March 1950, but she continued to alternate cruises to Europe and the Mediterranean with periods of training and upkeep out of Norfolk and the Caribbean. When crisis flared in the Middle East over Egypt's seizure of the Suez Canal in 1956, Holder steamed to join the 6th Fleet in insuring the safety of American lives and property and helping to lessen the chance of a larger outbreak. Again in 1958 Holder sailed to the Mediterranean in March and in July took part in the landings at Beirut, Lebanon. Answering the call of the legitimate government, American surface ships and amphibious forces acted swiftly to avert the fall of the rightful government, a Communist takeover, and disaster in the Middle East.

The veteran destroyer, reclassified DD-819 again 7 August 1962, took part in another graphic demonstration of the importance of sea power, this time in the Western Hemisphere. When the introduction of offensive missiles into Cuba forced President Kennedy to proclaim a naval quarantine of that island, Holder and other ships took up station so as to intercept and inspect shipping. The destroyer made an inspection of a Russian ship leaving Cuba 8 November and remained on this duty until 21 November, when she steamed to Norfolk. Ships had once more given meaning and teeth to American policy in the cold war.

Holder entered Norfolk Naval Shipyard 17 December 1962 for Fleet Rehabilitation and Modernization Overhaul, a major repair and modernization job which added years to her useful life. New weapons, including ASROC and DASH, and a helicopter hanger and flight deck increased the ship's antisubmarine capability. Emerging in October 1963, the ship conducted shakedown training before returning to the Caribbean for maneuvers.

Holder devoted 1964 and 1965 to ASW training. From 12 January 1965 to 4 February she participated in the recovery of NASA's unmanned Gemini II capsule. Between 26 April and 17 May, Holder patrolled the Dominican Republic's coast during the struggle to prevent a Communist take over of that Island nation. She spent the next year on duty in the Atlantic.

On 6 June 1966 Holder sailed through the Panama Canal on her way to the Pacific Fleet. From 15 to 28 July she was plane guard ship for Ranger (CVA-61) in Tonkin Gulf. She then conducted naval gunfire support off Vietnam from 29 July to 8 August. In October Holder was plane guard for Intrepid (CVS-11), and also she acted in support of Chicago (CG-11). Sailing for home 10 November via the Suez Canal, Holder arrived in Norfolk 17 December to prepare for future action.