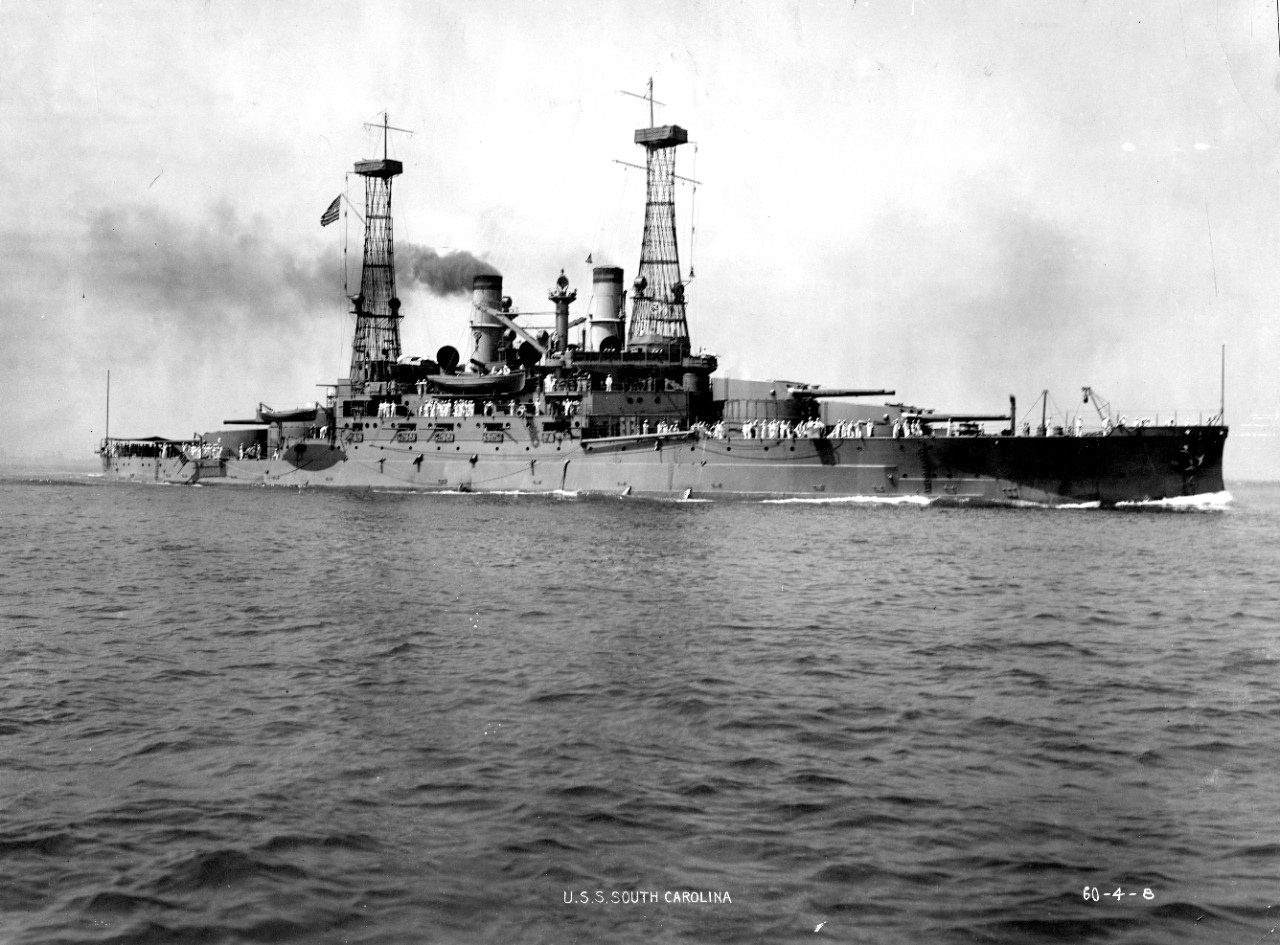 Named for the state of South Carolina.

The fourth South Carolina (Battleship No. 26) was laid down on 18 December 1906 at Philadelphia, Pa., by William Cramp & Sons Ship and Engine Building Co.; launched on 1 July 1908; sponsored by Miss Frederica Ansel, daughter of Governor Martin F. Ansel of South Carolina; and commissioned on 1 March 1910, Capt. Augustus F. Fechteler in command.

South Carolina departed Philadelphia on 6 March 1910 for shakedown, cruised to the Danish West Indies and Cuba, and then visited Charleston, S.C., from 10 to 15 April. After conducting trials off the Virginia capes and off Provincetown, Mass., the battleship visited New York City on 17 and 18 June on the occasion of a reception for former President Theodore Roosevelt. Voyage repairs at Norfolk, naval militia training duty, and Atlantic Fleet maneuvers off Provincetown, Mass., and the Virginia capes occupied her time from the end of June until the beginning of November.

Between 1 November 1910 and 12 January 1911, she voyaged to Europe and back with the Second Battleship Division. This visit took her to Cherbourg, France, and Portland, England. Upon her return to Norfolk, she entered the navy yard for repairs, and then conducted tactics training and maneuvers off the New England coast following a short visit to New York, then steamed east with the Second Battleship Division for a visit to Copenhagen, Denmark; Stockholm, Sweden; and Kronstadt, Russia. During the return from Kronstadt, she reached Kiel, Germany, on 21 June in time to join in the Kiel Yachting Week, hosted by Kaiser Wilhelm II. On 13 July 1911, she arrived off Provincetown and engaged in battle practice along the coast to the Chesapeake Bay.

Late in 1911, she took part in the naval review at New York and maneuvers with the First Squadron out of Newport, R.I. On 3 January 1912, she departed New York for winter operations in the vicinity of Guantanamo Bay, Cuba. South Carolina returned to Norfolk on 13 March and, until late June, cruised the east coast as far north as Newport. In June, she joined in the welcome receptions at Hampton Roads and New York given in honor of the visiting German Squadron, comprised of battle cruiser Moltke and two small cruisers Bremen and Stettin. On 30 June, she entered the yard at Norfolk for overhaul.

Just over three months later, she sailed to New York for a four-day visit, from 11 to 15 October 1912. Next came a month of exercises off the coast of New England and the Virginia capes. From mid-November until mid-December, South Carolina steamed with the Special Service Division on visits to Pensacola, New Orleans, Galveston, and the Mexican port of Vera Cruz. She returned to Norfolk on 20 December and remained there until 6 January 1913, when she sailed to Colon, Panama, where her crew saw the newly completed canal. After maneuvers in the area of Guantanamo Bay, she reentered Norfolk on 22 March; then cruised north as far as Newport, stopping at New York from 28 to 31 May for the dedication of a memorial to the battleship Maine.

After a brief period training midshipmen in the Virginia Capes area, South Carolina embarked upon a 16-month period during which she carried the "Big Stick" to the Gulf of Mexico and the Caribbean Sea. From late June until mid-September 1913, she cruised the eastern coast of Mexico protecting U.S. interests at Tampico and Vera Cruz. She was overhauled at Norfolk from late September 1913 until early January 1914, and then headed for maneuvers off Culebra Island.

On the 28th, the battleship landed marines at Port-au-Prince, Haiti, to guard the United States Legation and to establish a field radio station during that period of political convulsions. She departed Port-au-Prince on 14 April after the restoration of some order under General Orestes Zamar, the new Haitian President. She coaled at Key West, then steamed to Vera Cruz where she sent a landing force ashore to join in the occupation of that city until her departure a month later. South Carolina spent the troubled summer of 1914 investigating conditions in Santo Domingo and Haiti. 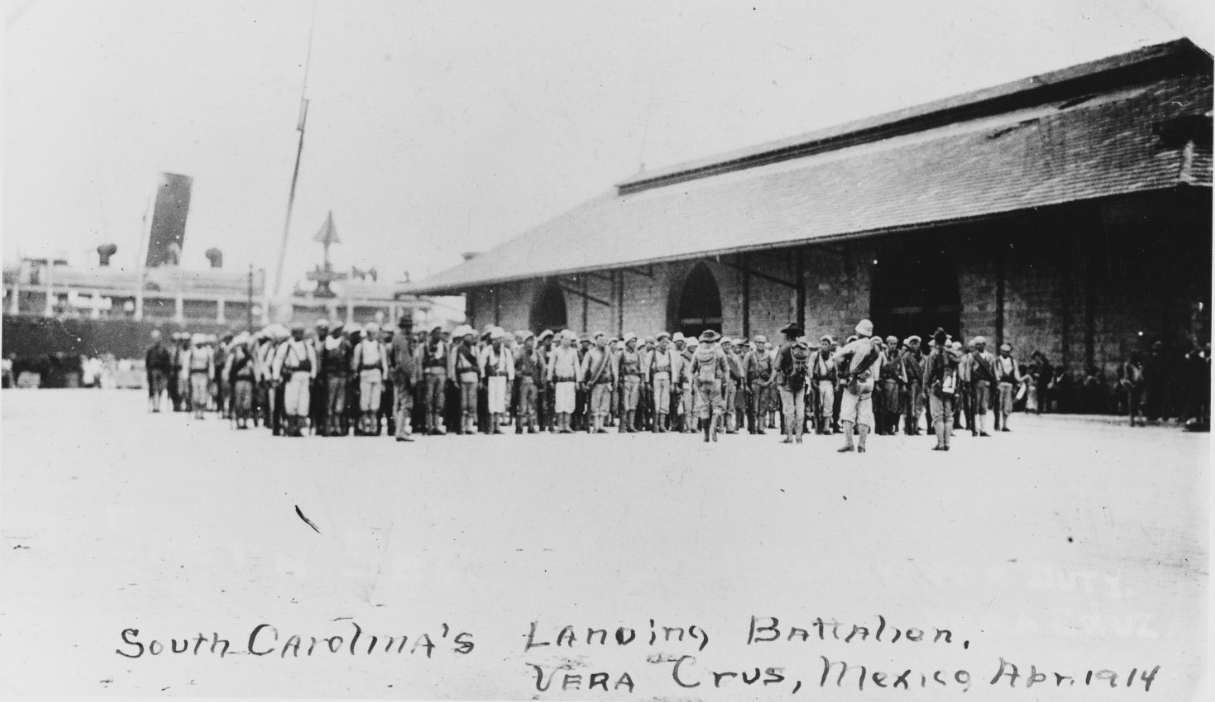 By the time she returned to Norfolk on 24 September 1914, World War I had already been raging for almost two months. A little less than a month later, on 14 October, the battleship entered the yard at Philadelphia. She emerged revitalized on 20 February 1915 and headed south for the usual battle practice in the vicinity of Cuba. The exercises took on new meaning since they were held on the heels of the diplomatic crisis triggered by Germany's declaring the waters around England to be a war zone. However, cooler heads prevailed and not even the sinking of Lusitania could provoke the United States to belligerency. Accordingly, for almost two years, South Carolina continued her routine of winter and spring exercises out of Guantanamo Bay, summer operations off Newport, and periodic repairs at Philadelphia.

The entry of the United States into the war on the side of the Allies in April 1917 did not presage dramatic events for the Navy. Except for U-boats and an occasional disguised commerce raider, the Royal Navy had already cleared the seas of German naval might at such battles as Jutland and the Falkland Islands. Therefore, South Carolina continued to operate along the east coast through 1917 and for the first eight months of 1918.

On 9 September 1918, she joined the escort of a convoy bound for France. A week later, she turned the convoy over to other escorts in mid-ocean and steamed back to the United States. After a brief repair period at Philadelphia, she returned to gunnery training service and was so employed at the time of the Armistice, 11 November 1918.

From mid-February until late July 1919, South Carolina made four round-trip voyages between the United States and Brest, France. By 26 July, when she entered Hampton Roads at the end of the last of these voyages, she had returned over 4,000 World War I veterans to the United States. Following an overhaul at the Norfolk Navy Yard, she embarked midshipmen at Annapolis for a cruise to the Pacific. She departed Annapolis on 5 June 1920, transited the Panama Canal, sailed to Hawaii, and then to the west coast. She visited Seattle, San Francisco, and San Diego as she sailed down the western seaboard. South Carolina cleared San Diego on 11 August, retransitted the canal, and sailed for Annapolis on 2 September; then she headed on to Philadelphia, where she remained for seven months.

In early April of 1921, she cruised to Culebra Island in the West Indies for training, and then operated in the Chesapeake Bay. On 29 May, the battleship embarked another complement of midshipmen at Annapolis. She called at Christiana, Norway, and Lisbon, Portugal, before heading to the Guantanamo Bay area to round out the midshipmen's summer training cruise. She debarked the midshipmen at Annapolis on 30 August and steamed to Philadelphia where she arrived the following day. South Carolina was decommissioned at Philadelphia on 15 December 1921 and remained there until her name was stricken from the Navy List on 10 November 1923. Her hulk was sold for scrap on 24 April 1924 in accordance with the terms of the Five-Power Naval Treaty of Washington. 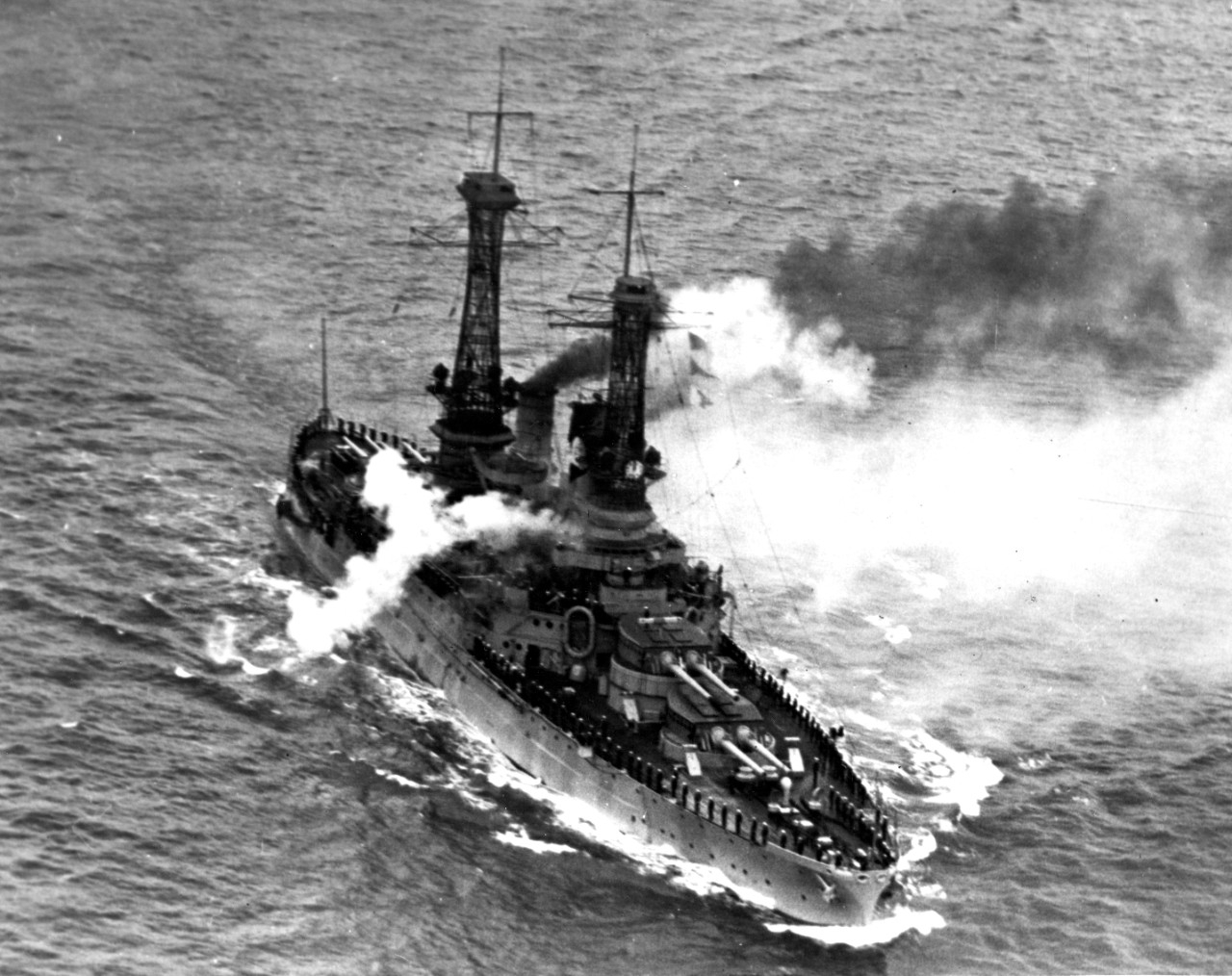