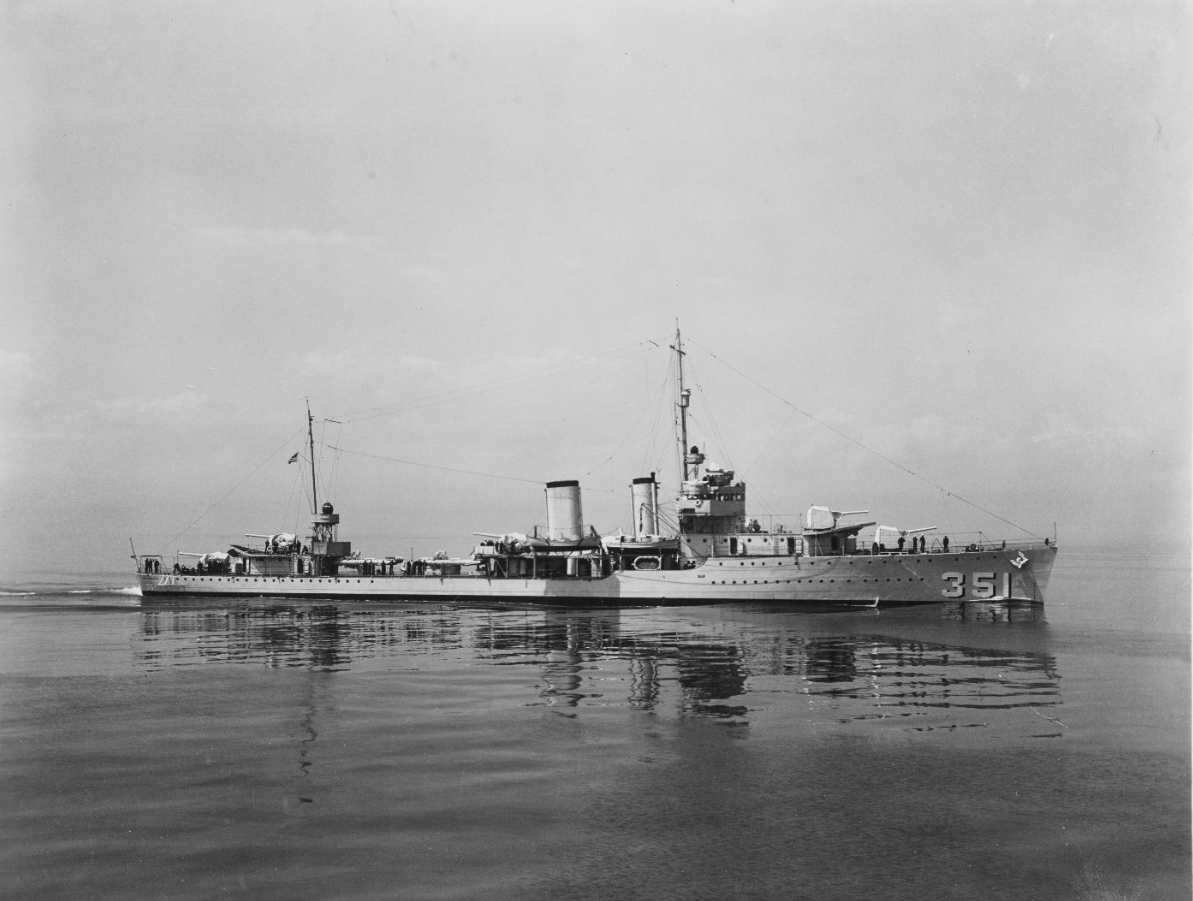 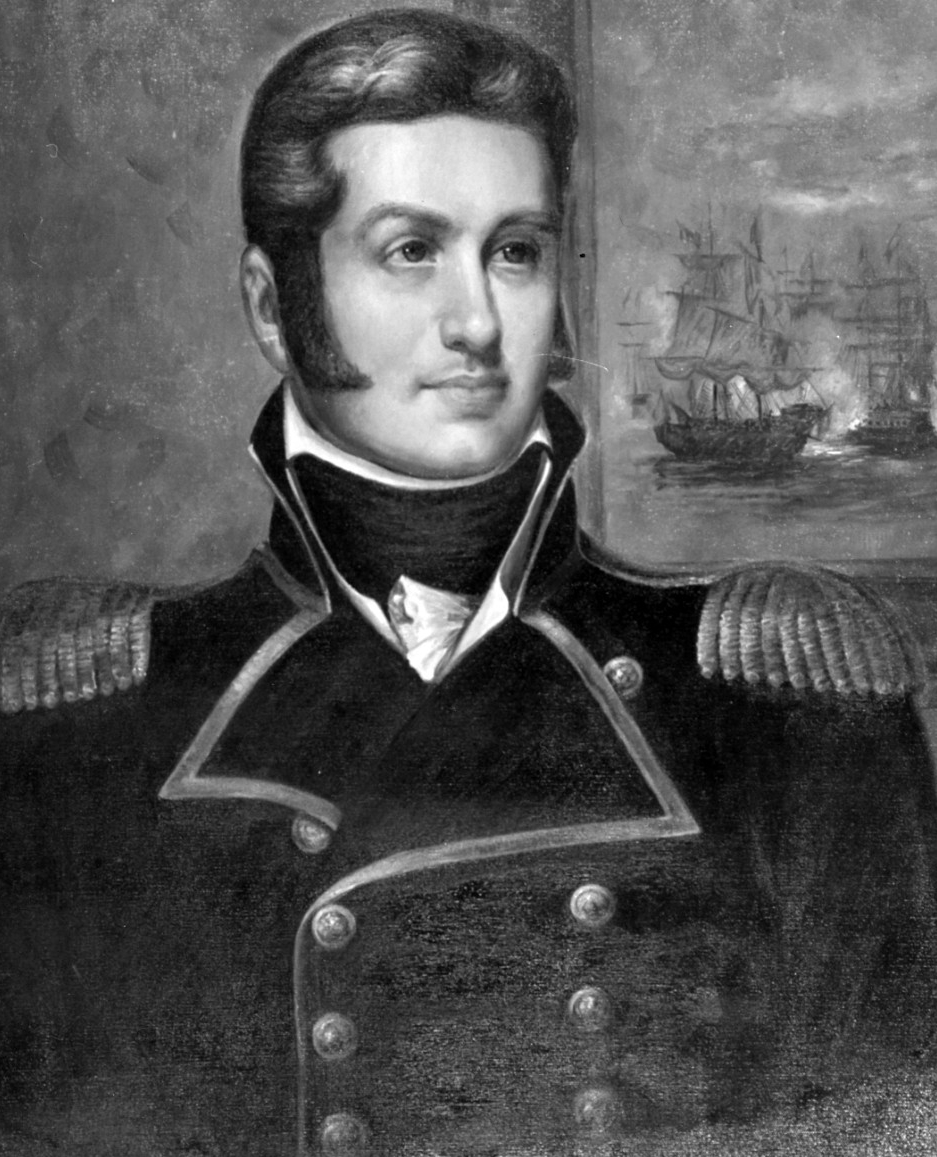 The third Macdonough (DD‑351) was laid down on 15 May 1933 at Charlestown, Mass., by the Boston Navy Yard; launched on 22 August 1934; sponsored by Miss Rose Shaler Macdonough, granddaughter of Commodore Thomas Macdonough; and commissioned on 15 March 1935, Cmdr. Charles S. Alden in command.

Following an extensive shakedown cruise to Europe and western South America, Macdonough joined the Pacific Fleet and operated out of San Diego, Calif., until 12 October 1939, when she was assigned to the Hawaiian Detachment and shifted to a new home port, Pearl Harbor, Territory of Hawaii, as part of Destroyer Squadron 1.

In port on 7 December 1941, Macdonough splashed one of the Japanese attack planes before heading out to sea to join others in the search for the enemy task force. For the next three and a half months, the destroyer performed scouting assignments southwest of Oahu. Before returning to Pearl Harbor to escort convoys to and from west coast ports, she steamed as far as New Guinea, lending support to air strikes on Bougainville, Salamaua, and Lae.

Macdonough returned to the western Pacific to prepare for the Guadalcanal invasion. Operating with the carrier Saratoga (CV-3) she provided cover for the landings on Guadalcanal and Tulagi, 7 August 1942. She remained in the area, taking part in the Battle of Savo Island and fighting enemy aircraft and shipping during the landing of reenforcements on the island. At the end of September, she commenced escort work, plying between New Guinea, Espiritu Santo, and Pearl Harbor until reporting to the Mare Island Navy Yard, Vajjeo, Calif., on 22 December, three days before Christmas, to begin an overhaul.

Macdonough next steamed north for the assault and occupation of Attu Island in the Aleutians. Arriving off Adak, Alaska, on 16 April 1943, the destroyer patrolled northeast of Attu until the assault. On 10 May, while maneuvering in heavy weather to guard the attack transports, she collided with the light minelayer (converted destroyer) Sicard (DM-21) and was forced to retire under tow.

The ship remained in the repairs dock at Mare Island until 23 September 1943, when she prepared to get underway for the Gilbert Islands. Arriving for the invasion of Makin Island, 20 November, she acted as control vessel for the landing craft and, following the completion of that phase of the operation, entered the lagoon to bombard Japanese installations. On 23 November, Makin was declared secure and Macdonough returned to Pearl Harbor.

In January 1944, she joined the Northern Attack Force staging for the assault on the Marshalls. As the primary fighter director ship for the initial transport group, Macdonough at first operated off Kwajalein Atoll. On 29 January, she proceeded to Wotje Atoll and participated in the shore bombardment there until returning to Kwajalein on the 31st for the occupation of Roi and Namur Islands. The indispensable destroyer then took up radar picket duties until proceeding on to Eniwetok Atoll.

On 21 and 22 February 1944, Macdonough accurately shelled enemy positions on Parry Island at the deep entrance to Eniwetok lagoon. A month later, she was a reference and rendezvous ship for carrier TF 58, then striking the Palau Islands. Continuing her varied pace, she was at Hollandia, New Guinea, by 21 April, providing fire support for the landings there. Then, at the end of the mouth she steamed eastward to take up radar picket duty south of Truk. During this assignment, Macdonough, in concert with aircraft from the small carrier Monterey (CVL-26) and the destroyer Stephen Potter (DD-538) sank the Japanese submarine RO‑45 (Lt. Cmdr. Hamazumi Yoshihisa, commanding) on 30 April 1944.

On 4 May 1944, the destroyer arrived at Majuro to join the forces gathering for the invasion of the Marianas. Departing the Marshalls on 6 June, Macdonough operated with the fast carrier force during the Saipan invasion. She performed screening and picket duties and was part of the bombardment group firing on Japanese installations on the west side of the Island.

She next took part in the Battle of the Philippine Sea, 19 to 20 June 1944, firing at the few enemy planes which got through the combat air patrol. After the victory, Macdonough returned to the Marianas. Ordered to Guam, she covered underwater demolition teams reconnoitering the beaches and provided harassing fire to prevent repairs to beach defenses on the island. On 21 July, the destroyer patrolled the waters off Guam to protect the assault craft from enemy submarines, continuing that role until departing for Hawaii 10 August.

After a brief stay at Pearl Harbor, Macdonough departed for the Admiralty Islands. She arrived at Manus on 15 September 1944 and commenced escort duties. On 14 October, she accompanied troop transports to Leyte and remained to protect her charges through the battle for Leyte Gulf, 24 to 25 October. She then steamed back to Manus for another convoy to Leyte, on 3 November, and upon her return to Philippine waters patrolled Leyte Gulf and the southern Surigao Strait area. The next mouth, Macdonough resumed escort duty.

Operating out of Ulithi, she guarded fleet oilers on their refueling runs in the Philippine, Formosa, and South China Sea areas. In January 1945, the destroyer sailed for Puget Sound Navy Yard, Bremerton, Wash., and a three‑month overhaul. Returning to Ulithi, she was assigned to radar picket station off that fleet base until 5 July, when she resumed screening convoys. For the remainder of the war, she protected Allied shipping between Ulithi and Okinawa.

At Guam when hostilities ended, Macdonough soon received orders to return to the United States. She arrived at San Diego on 3 September 1945, continuing on the next week to the New York Navy Yard, Brooklyn, N.Y., where she was decommissioned on 22 October 1945. She was stricken from the Navy Register on 1 November 1945. 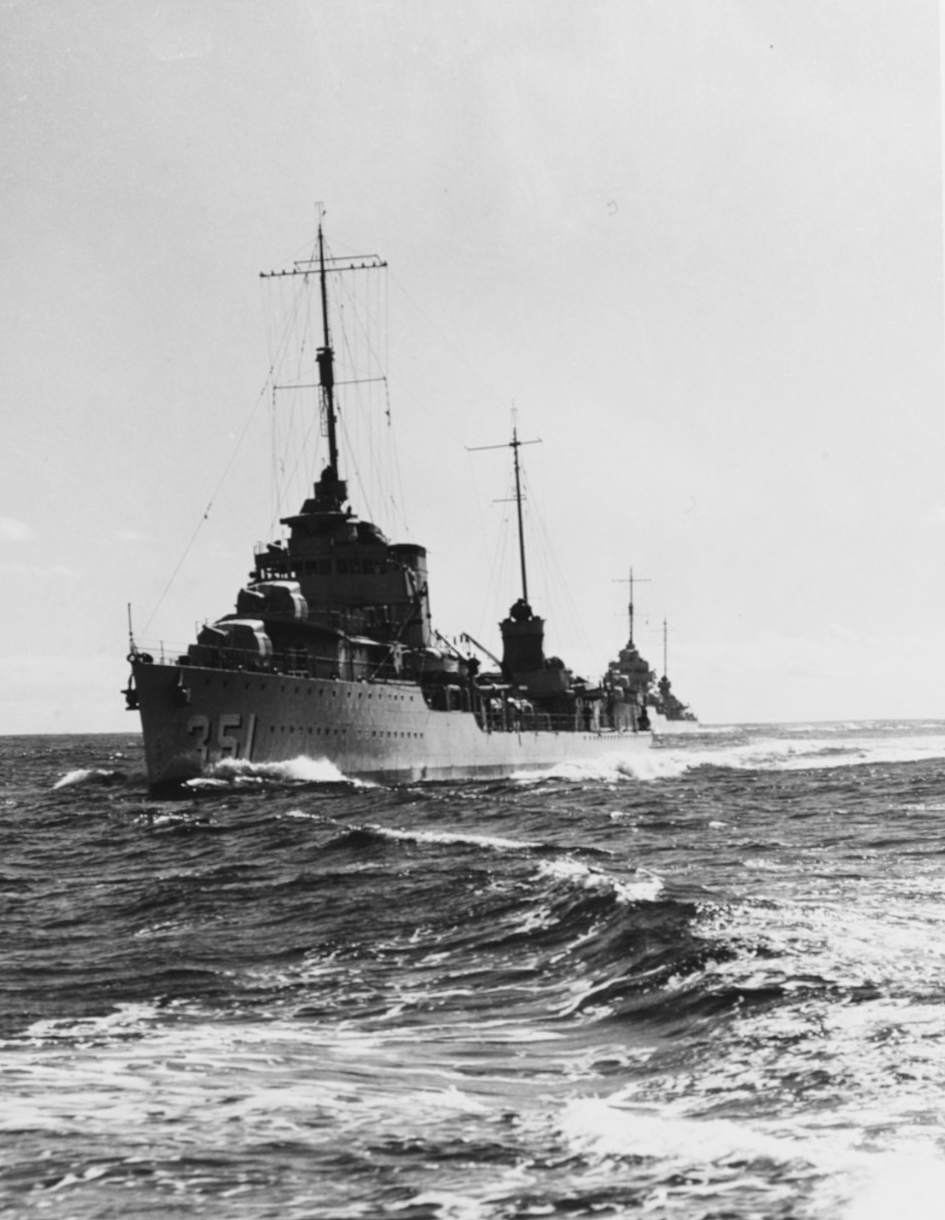