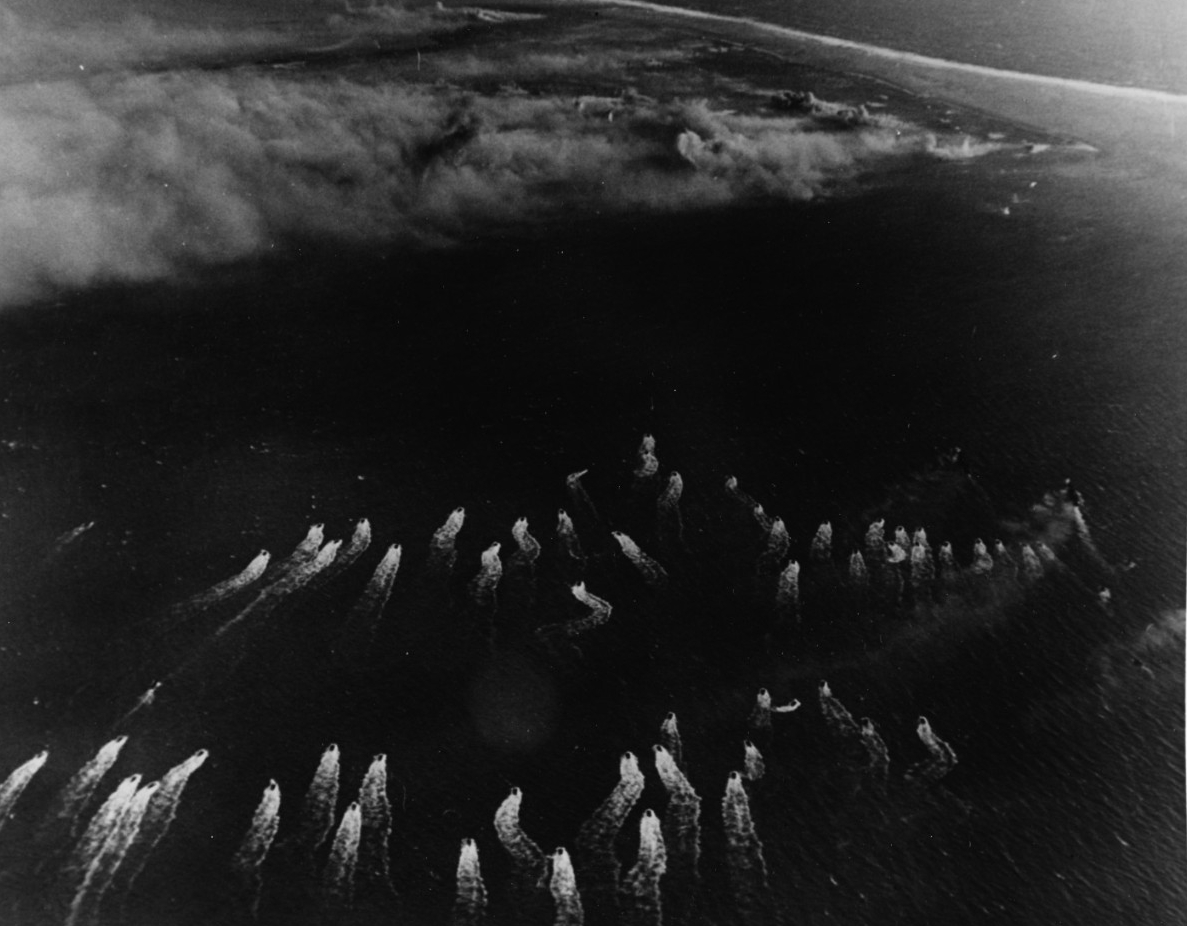 Surprised by the relative ease of capturing Kwajalein (see also H-Gram 026-1), Vice Admiral Spruance and Rear Admiral Turner quickly began lobbying Admiral Nimitz to capture Eniwetok Atoll, 325 miles west-northwest of Kwajalein (and 1,000 miles east of the Marianas) before the Japanese could send reinforcements. The Japanese surprise air raid on Kwajalein on 12 February only added additional urgency. An airstrike on Eniwetok on 30 January by Rear Admiral Sherman’s carrier task force had destroyed all 15 Betty medium bombers present, but there was risk that these could quickly be replaced. Vice Admiral Spruance and Rear Admiral Turner’s plan was to use the 8,000-man Marine reserve force that had not been needed for the Kwajalein assault. The plan was quickly approved and designated Operation Catchpole, with a D-Day accelerated to 17 February 1944. The Japanese had anticipated U.S. action, and in response to the fall of Tarawa, part of the 1st Amphibious Brigade of the Imperial Japanese Army had arrived at Eniwetok on 4 January 1944 in order to fortify it. Even another week’s delay in mounting the operation to capture Eniwetok would have resulted in greater cost.

Like Kwajalein, Eniwetok was an atoll consisting of a number of small low-lying islands ringing a central lagoon about 50 miles in circumference. At the north end lay Engebi Island, the only one with an airfield, and at the south end lay Eniwetok Island. There were only two passages into the lagoon, one of them, the “Wide Passage” at the southern end, with significant shoals, and, as it turned out, mines––the first minefield discovered in the Marshalls. (The classified Japanese charts captured at Kwajalein proved invaluable to the Eniwetok operation.) Engebi was the main objective, but the only way to reach it from the lagoon side was through the one passage (the “Deep Passage”) at the southeastern end of the lagoon between Parry and Japtan islands, north of the island of Eniwetok. Japanese forces on the islands included about 700 army and 50 navy personnel on Engebi as well as another 800 on Eniwetok and 1,350 on Parry.

U.S. carrier air strikes on Eniwetok commenced on 16 February 1944 with aircraft from TG 58.4 (Saratoga and light carriers Princeton and Langley) commanded by Rear Admiral Samuel P. Ginder. No Japanese ships, submarines or aircraft opposed the landings on Eniwetok. Air strikes by VII Air Force bombers flying from Tarawa (900 miles each way) neutralized any Japanese air threat from Ponape Island, while the bulk of TF 58 Fast Carrier Force was striking the major Japanese base at Truk and thus ensuring that no Japanese forces from there could threaten the Eniwetok landings. 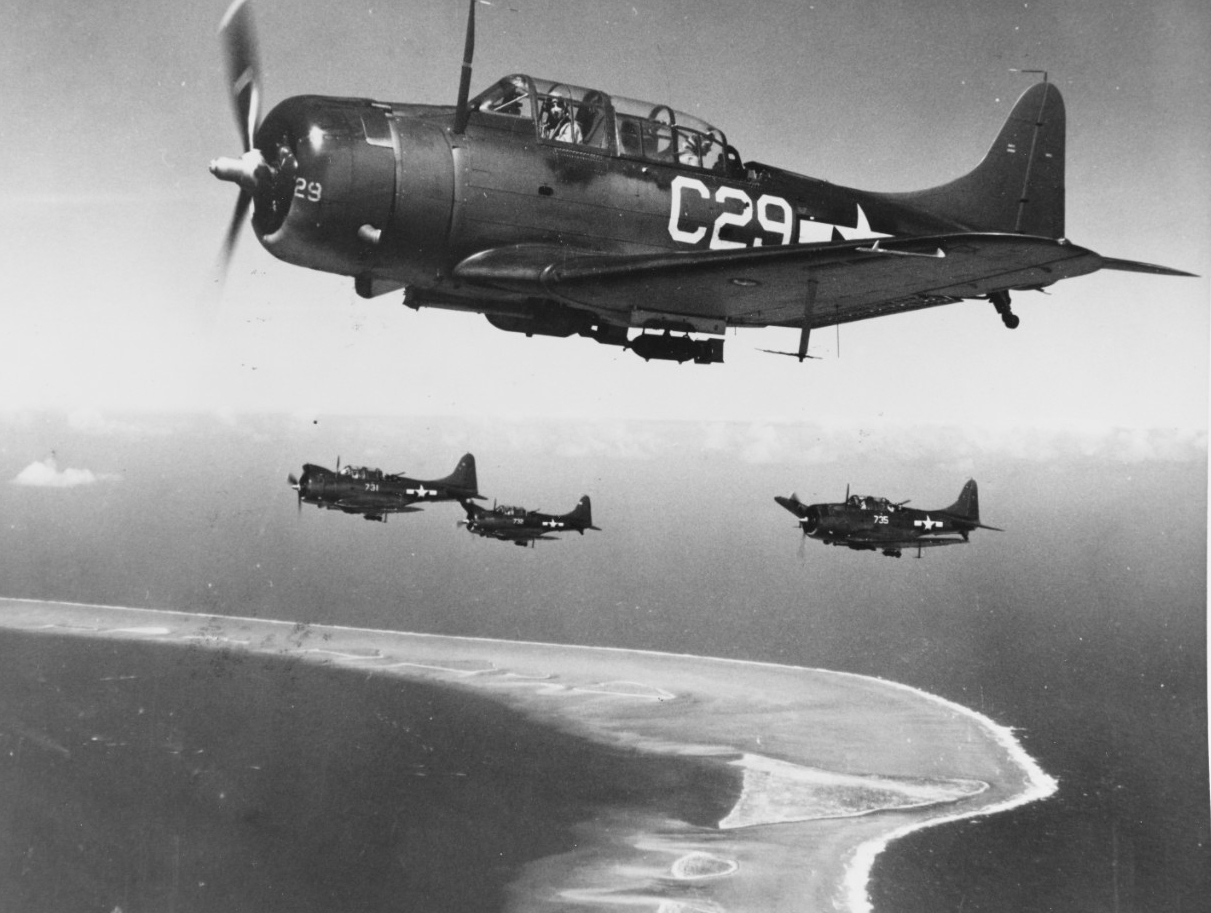 On D-day, 17 February, U.S. cruisers and destroyers opened fire on the islets flanking the Deep Passage. There was no response from the Japanese, who were, according to Morison, “playing possum.”  Because a minefield was discovered in the Wide Passage, entry through the Deep Passage was delayed in order to enable it to be swept as well, which took two hours. No mines were found there. The battleship Tennessee preceded the transports into the lagoon, none of which were challenged by the Japanese on the flanking islets. The transports then transited the ten miles across the lagoon to arrive off Engebi by about 1230. Unfortunately, rampant confusion also arrived as the submarine chaser SC-1066, designated as the convoy guide, took station off the wrong islet (where the Marines intended to set up artillery).  Following a series of additional snafus, Rear Admiral Hill relieved the skipper of SC-1066 on the spot and gave Captain Loomis a severe wire-brushing. Marine Brigadier General Watson fired his regimental artillery commander. Despite the confusion, the reconnaissance party successfully accomplished its mission and the Marine artillery was put ashore on islets near Engebi, which they bombarded all night.

At dawn on 18 February, three U.S. battleships and a heavy cruiser opened fire on Engebi from two directions, accompanied by airstrikes and a destroyer providing close-in support. At 0843, two Marine battalions went ashore, meeting little resistance at the beach and quickly securing the airfield. The third Marine battalion then went ashore to eliminate remaining resistance. By 1450 the island was declared secure, although isolated resistance continued for another day. U.S. casualties included 85 Marines killed and 166 wounded. The Japanese lost 1,276 killed and 16 captured. U.S. intelligence officers, on sifting through enemy documents on Engebi, discovered that there were far more Japanese troops on Eniwetok and Parry Island than had been estimated. Having learned lessons from the very extensive U.S. aerial reconnaissance of Tarawa and Kwajalein, the Japanese had adopted very effective camouflage and concealment. They also managed to hold their fire as U.S. ships transited the Deep Passage. This necessitated a change of plans. Instead of the U.S. Army 106th Regimental Combat Team assaulting Eniwetok Island and Parry Island simultaneously, the islands would be assaulted sequentially, and the third Marine battalion of the 22nd Regiment would re-embarked and transported from Engebi back across the lagoon in order to act as a reserve for the Army assault on Eniwetok. 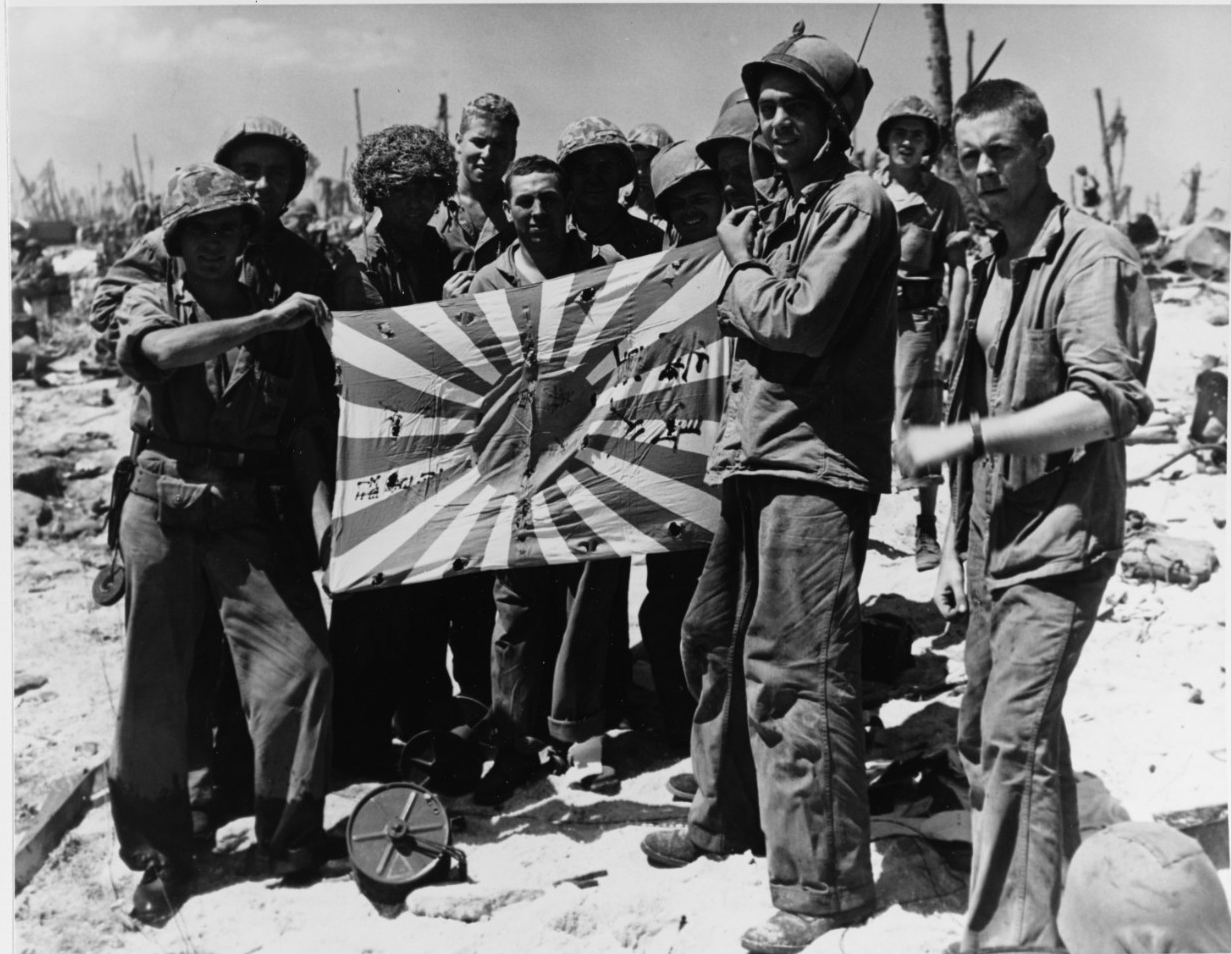 Marines and Coast Guardsmen proudly display a Japanese flag, picked up by one of them during the capture of Engebi Island, Eniwetok Atoll, 19 February 1944 (80-G-216033).

Commencing at 0710 on 19 February, heavy cruisers Portland and Indianapolis, as well as LCI gunboats and two destroyers, opened fire on Japanese positions on Eniwetok Island. They were trying to make up for lost time as previous bombardments by air and sea had been cursory under the mistaken belief that the island was unoccupied. The bombardment was interrupted briefly for air strikes, but it was essentially too little too late. Both battalions of the 106th RCT were put ashore, and both quickly became bogged down on the beach as an eight-foot sand dune just inland thwarted movement off the beach by LVTs. Nevertheless, the Army troops fought their way across the narrow island to the ocean shore and then defeated a Japanese counter-attack by about 300 to 400 troops. At about 1425, the Marine battalion in reserve was committed to the battle to eliminate the Japanese from the western end of Eniwetok. The Marines continued to attack throughout the night and beat back a Japanese counter-attack that reached the battalion command post before being repulsed. The island was not declared secure until 21 February. The capture of Eniwetok cost 37 U.S. lives and 94 wounded. The Japanese lost 800 dead and 23 prisoners.

Parry Island turned out to be the most heavily defended of the three islands and included the headquarters of General Nishida’s 1st Amphibious Brigade. The defenses were actually well-thought-out, but fortunately for the U.S., a document captured on Eniwetok had the defense plan for Parry. Instead of the Army assaulting the island, the mission was given to the two Marine battalions that had first gone ashore at Engebi. On 20 February, Marines seized the islet of Japtan across the Deep Passage from Parry and set up artillery to bombard it. For three days, Parry Island was blasted by the battleships Pennsylvania, Tennessee, and Colorado; the heavy cruisers Louisville and Indianapolis; and aircraft from Sangamon, Suwanee and Chenango.

D-day for Parry Island on 22 February got off to a bad start with a “friendly fire” incident. At 0805 six LCI gunboats were maneuvering to support the Marine landing, three on the right flank and three on the left flank. At 0845, the destroyer Hailey (DD-556) opened fire on assigned targets near the beaches. At the same time the LCIs on the right flank were preceding the LVT amphtracs when they were obscured by smoke blowing back from the shore bombardment. In the reduced visibility, LCI-442 was hit by a Hailey projectile bursting overhead, killing six and wounding five men. LCI-440 was then hit twice, killing seven men and wounding 39. LCI-365 was also hit before Hailey got the word to cease fire. In the subsequent investigation, Rear Admiral Hill cleared the skipper of Hailey of blame, attributing the incident to the smoke and dust, and praising the gallantry of the LCI crews. Fortunately, the rest of the battle went better, with the Marines reaching the shore at 0900. Although the Marines met strong resistance, they were in control of the island by the end of the day. The cost to the Marines was 73 killed or missing and 261 wounded. Of the approximately 1,330 Japanese on Parry Island, 105 were captured and the rest killed, including Major General Nishida.

With the capture of Majuro, Kwajalein and Eniwetok, the U.S. had the islands it needed to sustain the advance across the central Pacific. Japanese strongpoints on the islands of Jaluit, Mili, Maloelap, Wotje, and Nauru were bypassed, their aircraft destroyed, their airfields put out of commission by regular bombing missions, and their garrisons starved for supplies and food. U.S. ships occasionally bombarded the islands, as much for target practice as anything, although on 18 March 1944 a shore battery on Mili succeeded in hitting the battleship Iowa with two 4.7-inch shells. Other than embarrassment to the embarked flag officer, Vice Admiral Willis A. Lee, damage to the new battleship was negligible.

Back to H-Gram 026 Overview