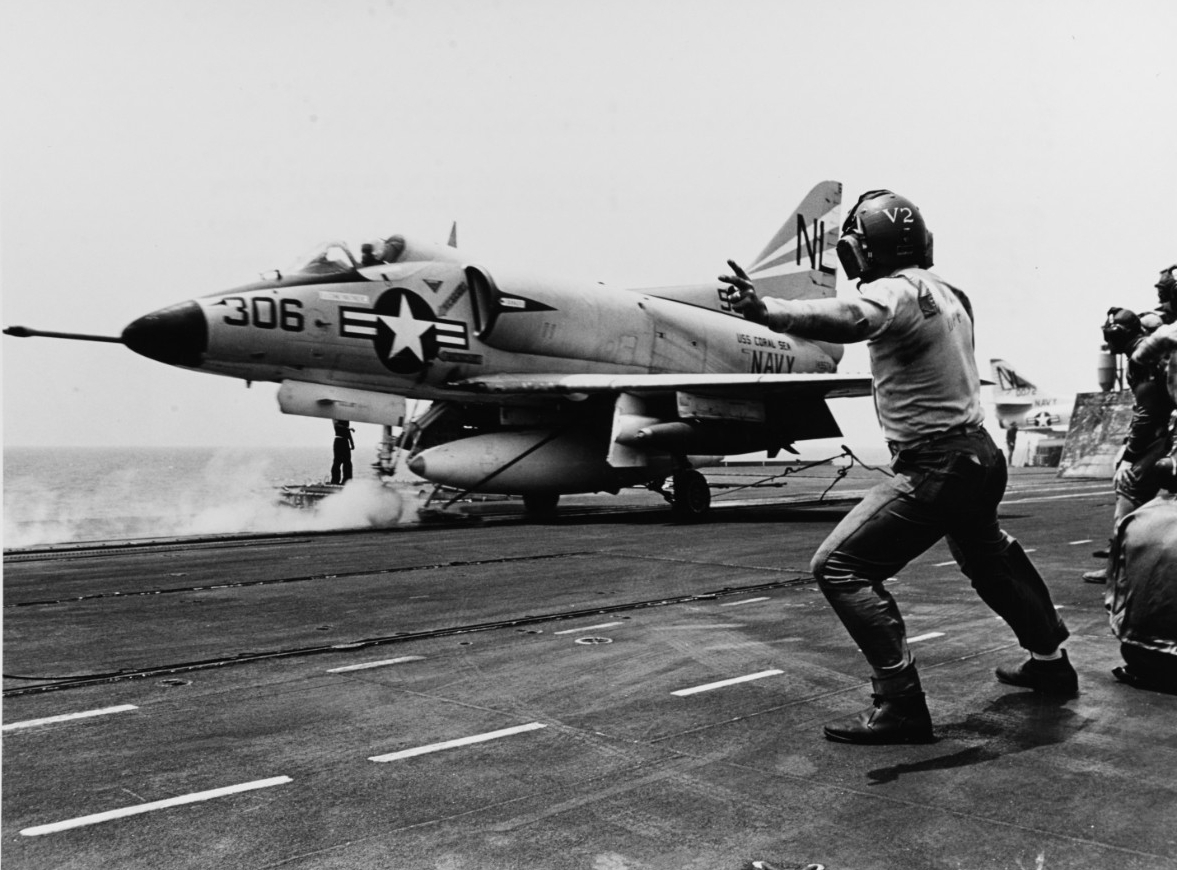 A USS Coral Sea (CVA-43) catapult officer signals launch and an A-4 Skyhawk starts down the flight deck, during operations in the South China Sea, 24 March 1965. The aircraft is being launched from the carrier's starboard catapult (USN 1111691).

On 2 March 1965, Operation Rolling Thunder missions commenced against North Vietnam. The goal of the operation was to discourage the Hanoi regime’s direction and support of an insurgency that threatened to destroy the Republic of Vietnam. The campaign sought to strike targets sufficiently valuable to pressure the North Vietnamese into concessions, albeit in a limited manner that would not result in too many civilian deaths, the destruction of the North Vietnamese regime, or a Soviet or Chinese intervention. Therefore, targets chosen tended to be interdiction targets, such as bridges and railway lines, plus ones connected with the industrial base and war economy, such as POL (petroleum, oil, lubricants), power plants, and weapons and ammunitions storage depots. Absent from the list were many air defense targets, which were either too close to heavily populated areas or, in the case of airfields, too provocative.

In Phase I (March–June 1965), a variety of targets, including ammunition depots, radar sites, and barracks, were hit in an attempt to persuade North Vietnam to come to the negotiating table. It accomplished little other than hardening the resolve of the Communist regime and spurring the creation of one of the world’s most sophisticated air defense networks.

Phase II (July 1965–January 1966) targeted roads, bridges, boats, and railroads. Phase III (January–October 1966) focused on POL resources. Phase IV (October 1966–May 1967) shifted the campaign to industrial facilities and power-generating plants. Significantly in Phase IV, U.S. warplanes struck targets in Hanoi for the first time, but these more aggressive tactics did not have much impact on the North Vietnamese leadership or its forces in South Vietnam. Overall, the air campaign only produced limited interdiction gains by early 1967, but had cost the United States greatly in the number of aircraft lost. A Department of Defense report released to the press on 9 January 1967 claimed a loss of 599 fixed-wing aircraft from all the services and 255 helicopters—a total of 854 aircraft.

Phase V (May 1967–October 1968) focused on what remained of North Vietnam’s industrial infrastructure as well as “fleeting” targets of opportunity. In January 1968, however, the Tet offensive interrupted the campaign, compelling the Navy to shift air assets to close air support missions designed to defend major positions in South Vietnam. In Operation Niagara, Task Force 77 and other U.S. and South Vietnamese air forces deluged the enemy forces around Khe Sanh with a rain of bombs and rockets that decimated their ranks and eliminated any prospect of a successful ground assault on the base. Flying more than 3,000 attack sorties in support of the Khe Sanh defenders during February and March 1968, Yankee Station carrier aircraft strafed, rocketed, and bombed enemy positions, some as close as 100 yards to the U.S. base.

Militarily, the Tet Offensive proved disastrous for the Communists. Not only did the Viet Cong and North Vietnamese forces fail to hold onto any of the major towns or cities struck during the attack, but lost over 58,000 troops in the process. Nevertheless, Tet was a turning point in the war and a strategic victory for the enemy. Having heard only positive reports on the war from

General William C. Westmoreland and other government officials during preceding months, many Americans, including President Johnson, now considered the war unwinnable. Believing that Rolling Thunder was doing little to weaken the will of the enemy to fight, President Johnson delivered a televised address to the American people on 31 March 1968 announcing a halt to bombing operations north of the 19th parallel, another offer to negotiate a cease-fire agreement with Hanoi, and his decision not to seek a second term in office. The North Vietnamese government agreed to talk and, later that year, met with American diplomatic officials in Paris, but it would take the United States close to four more years and a significant amount of fighting to achieve a settlement acceptable to both parties.

Halloween 1968 marked the end of Operation Rolling Thunder. During the three and a half–year aerial assault, Navy and Marine aircraft flew 152,399 attack sorties against North Vietnam, just short of the Air Force total of 153,784 attack sorties. These U.S. strikes dropped 864,000 tons of bombs and missiles on North Vietnam. This total compared with 653,000 tons of conventional bombs unleashed during the three years of the Korean War, and the 503,000 tons dropped in the Pacific theater during more than three years of World War II. All told, Navy pilots shot down 29 enemy aircraft during the Rolling Thunder period while losing just eight aircraft to MiGs. Experience battling MiGs and other air defenses gained during Rolling Thunder led to a variety of technological innovations in air-to-air missile technology, electronic warfare, and improved command, control, communications, and intelligence.

Six hundred Navy and 271 Marine aviators were lost during the war, most of them during Rolling Thunder. Most of the Navy prisoners of war (POWs) were shot down during Rolling Thunder missions, including Medal of Honor recipient James B. Stockdale and Senator John McCain. In total, the North Vietnamese and Chinese captured 170 naval aviators and aircrew, 160 of whom Hanoi released in 1973.

Back to H-Gram 017 Overview