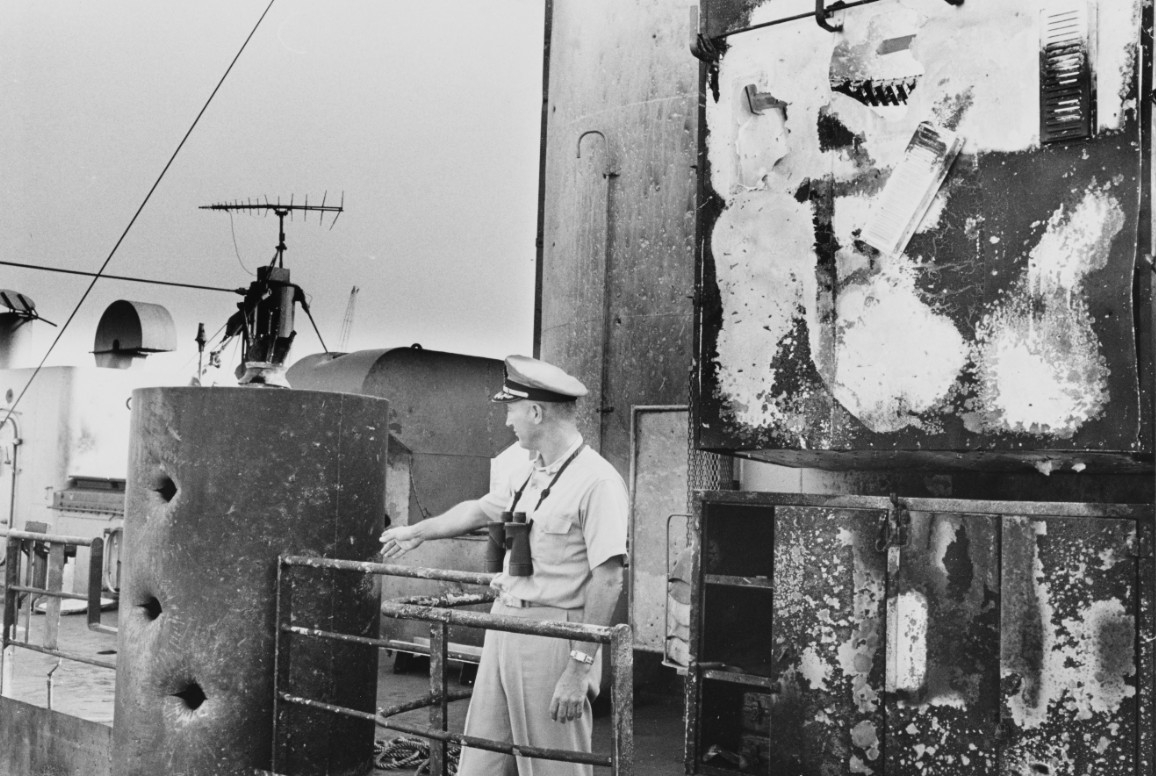 This date marks the 50th anniversary of one of the most bitterly contentious events in U.S. Navy history, and the controversy continues largely unabated to this day. It involves the mistaken attack by four Israeli jet fighters and three motor torpedo boats (MTB) on the USS Liberty (AGTR-5), which was conducting an intelligence collection mission in international waters off the north coast of the Sinai Peninsula in the midst of the Six-Day Arab-Israeli War. Of the 293 U.S. personnel aboard, 34 (31 Sailors, 2 Marines, and 1 National Security Agency civilian) were killed and 171 were wounded as a result of multiple strafing runs by jet aircraft, surface fire from the MTBs, and one hit by a 19-inch torpedo.

The crew of Liberty performed their duty with exceptional valor during that attack, saving their ship from severe damage that could easily have resulted in her loss. Liberty's commanding officer, CDR William L. McGonagle, was awarded the Medal of Honor for directing the response to the attack and saving his ship, and for refusing to leave his position on the bridge for many hours despite wounds incurred in the first strafing attack. Liberty's executive officer, LCDR Philip Armstrong, killed by strafing while leading a party attempting to jettison burning fuel containers over the side. was awarded a posthumous Navy Cross. The ship's intelligence officer, LT Steve Toth, was also killed by strafing while attempting to positively identify the attacking aircraft. Toth, along with ten others (two posthumously), was awarded the Silver Star.  Bronze Stars were awarded to 21 other crew members for bravery under fire in rescuing wounded crewmen during strafing attacks and for subsequent actions in fighting fires and flooding, and tending to the many wounded. Liberty was subsequently awarded the Presidential Unit Citation.

The central question that has caused the raging debate is whether the Israeli attack was premeditated or deliberately conducted against a ship known by them to be American, or whether it was a tragic accident resulting from negligent mistakes or the fog of war. To this date, no evidence has ever surfaced that the Israelis deliberately attacked what they knew to be an American ship, although numerous books and TV documentaries have attempted to make this case. There is certainly evidence that some Israelis began to doubt that the ship was Egyptian during the course of the air attack, and that failures in command and control contributed to the subsequent torpedo attack. In my view, looking at the evidence available, the initial Navy board of inquiry, led by RADM Isaac Kidd, Jr., was correct in its judgment that the attack was a tragic accident. However, that board was focused on whether actions of Liberty's crew were in any way responsible for the event, which has led others to question the thoroughness of RADM Kidd's investigation. However, the investigation has actually stood the test of time.

Nevertheless, beginning almost immediately after the attack and continuing over the years, numerous government and even very senior Navy officials have gone on public record with some version of "in no way could this possibly have been an accident, and no way could the Israeli's have been that incompetent." Such opinions, however, have either been based on hearsay, or originated in opinions uttered in the immediate aftermath of the attack, before any investigations were complete. Such expressed opinions by senior government and service officials have lent gravitas to all manner of conspiracy and cover-up theories ranging from the somewhat plausible to the ridiculously outlandish. To this day, various groups with both anti-Israel and pro-Israel agendas continue to challenge the official records in both the U.S. and Israel with alternative hypotheses.

It should be noted that members of the USS Liberty Survivors Association, who were on the receiving end of a devastating mass-casualty attack, remain adamant in their belief that it was a deliberate attack against a ship the Israelis knew to be American. This belief in not universally held among the survivors, but remains predominant. It was a horrific and traumatic attack, so hard feelings by the crew against the Israelis would appear completely understandable. There continues to be strong feelings amongst the crew that RADM Kidd's investigation was a rush to judgment that too readily accepted the Israeli explanation (and apology), and that the U.S. government deliberately whitewashed the event for political reasons. There is no question that both governments sought to play down the incident. For example, on the advice of his staff, President Johnson declined to personally present the Medal of Honor to CDR McGonagle. A low-key presentation was conducted at the Washington Navy Yard rather than at the White House, an action viewed by some of the crew as disrespectful of the sacrifice of the commanding officer and crew.

There were, however, numerous blunders by both the United States Navy and the Israeli air force and navy that resulted in the attack. Please see Attachment H-007-1 for more detail.