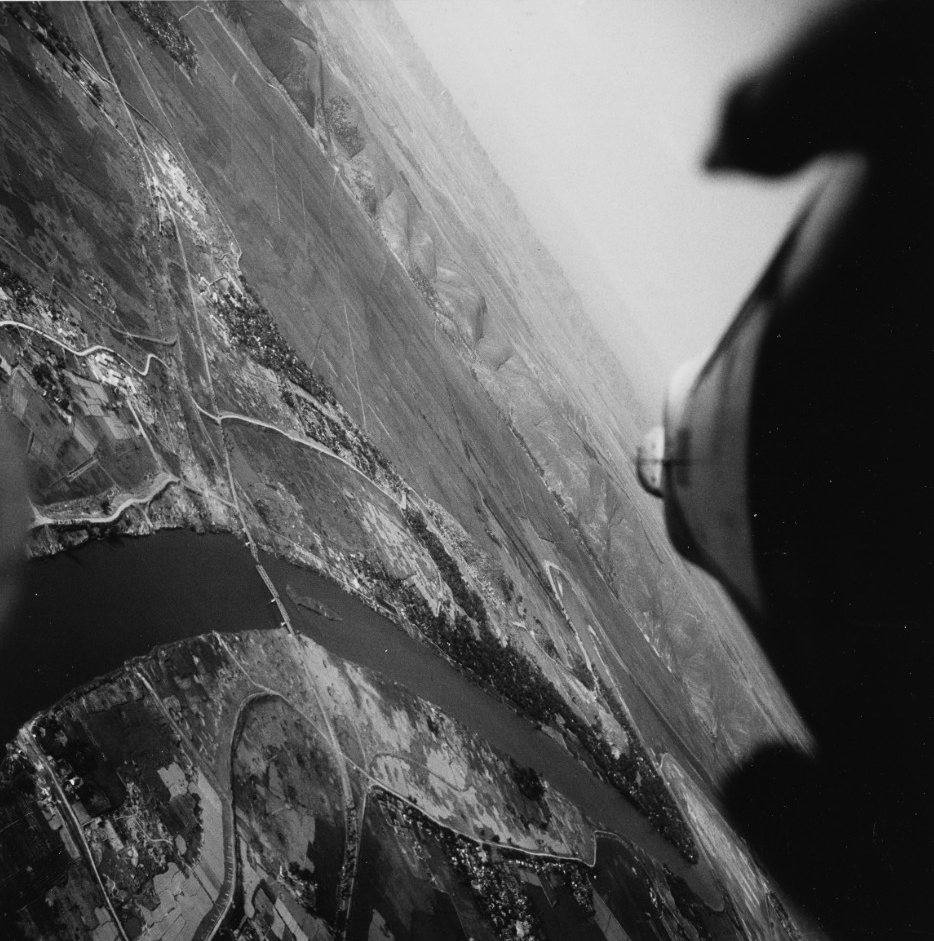 This H-gram covers the massive 1972 North Vietnamese “Easter Offensive” into South Vietnam, during which aircraft from six U.S. Navy aircraft carriers, along with naval gunfire support, played a critical role in beating back the attack and preventing the collapse of the South Vietnamese government. It also details the initiation of Operation Pocket Money, the extensive Navy aerial mining campaign to shut down Haiphong and North Vietnamese ports from Soviet and Chinese supply. Finally, it covers the initiation of an extensive bombing campaign of North Vietnam, Operation Linebacker, which had been suspended since the end of Operation Rolling Thunder in 1968. The first day of Linebacker resulted in the largest air-to-air battle of the war, and the first U.S. aces of the war.

On Good Friday, 30 March 1972, the North Vietnamese Army (NVA) launched a major conventional attack across the Demilitarized Zone (DMZ) into South Vietnam. Within the next two weeks, two more NVA offensive thrusts materialized from Cambodia into South Vietnam. One threatened the capital of Saigon and the other, into the Central Highlands, was intended to cut South Vietnam in two. The NVA offensive would ultimately involve about 140,000 men and 600 tanks and armored vehicles, along with greatly improved mobile air defense capability such as new shoulder-fired surface-to-air missiles (SAMs).

The North Vietnamese planned and prepared for the offensive while they were ostensibly negotiating at the Paris “peace talks,” succeeding in surreptitiously transporting extensive quantities of ammunition, fuel and other supply along the Ho Chi Minh Trail through Laos into Cambodia despite intensive U.S. Air Force and Navy bombing. By this time, virtually all U.S. ground combat capability had been withdrawn from Vietnam, along with most in-country Air Force and Marine Corps aircraft, leaving U.S. carrier aircraft as the primary combat force.

Despite atrocious monsoon weather conditions (which was no coincidence), the two U.S. carriers on Yankee Station in the Gulf of Tonkin, Hancock (CVA-19) and Coral Sea (CVA-43), immediately responded with strikes against the first NVA thrust across the DMZ toward the provincial capital of Quang Tri. Navy surface ships also responded immediately, slowing the North Vietnamese advance down the coast. Within a week, Kitty Hawk (CVA-63) and Constellation (CVA-64) arrived at Yankee Station, and as the weather slowly began to improve, the four carriers inflicted ever-greater casualties on the NVA.

As the gravity of the second and third NVA thrusts became apparent, Hancock and Constellation were shifted to Dixie Station in the South China Sea off South Vietnam to shorten the flight time to the beleaguered provincial capitals of An Loc (65 miles from Saigon) and Kontum (in the Central Highlands). Despite U.S. air attacks, Quang Tri in the north fell, but further NVA advance toward Hue City was slowed and then halted. In desperate battles around An Loc and Kontum, Army of the Republic of Vietnam (ARVN) troops barely hung on to the two cities, which would definitely have fallen without carrier air strikes and B-52 “Arc Light” missions, some flown from Thailand and many all the way from Guam.

As the situation in South Vietnam continued to deteriorate, carrier Midway (CVA-41) arrived in mid-April and Saratoga (CV-60), deploying on 72-hours notice from Norfolk, arrived in mid-May. The force of six carriers was the greatest concentration of carrier air power since World War II, matched only by Desert Storm in 1991.

In early April, Navy SEAL Lieutenant Thomas R. Norris would be awarded the Medal of Honor for multiple harrowing infiltrations behind NVA lines to successfully rescue two downed Air Force airmen. This was part of the largest, most complex, and costly combat search-and-rescue mission of the war (five aircraft would be lost, 16 damaged, 11 men killed, and two captured in the effort that began with the shoot-down of Air Force EB-66 “Bat 21” by an SA-2 SAM moved into South Vietnamese territory).

Responding to the scale and audacity of the NVA offensive, President Nixon quickly authorized a major expansion of bombing in North Vietnam, and unlike Operation Rolling Thunder, gave on-scene commanders wide latitude in targets and tactics. Since the end of Rolling Thunder, U.S. aircraft had only been authorized to conduct pinprick “protective reaction” strikes in the southern panhandle of North Vietnam in response to SAMs or anti-aircraft artillery (AAA) firing on U.S. reconnaissance aircraft and on aircraft going into Laos to bomb the Ho Chi Minh Trail. The expanded bombing campaign was designated Operation Freedom Trail and allowed bombing into the outskirts of Hanoi and Haiphong. In the first several months, until the Air Force could get more aircraft into Thailand, carrier aircraft conducted 60 percent of the strikes into North Vietnam (as well as a similar number against the NVA in South Vietnam).

Freedom Trail also authorized naval gunfire missions on targets in North Vietnam as far north as the approaches to Haiphong. In response, on 19 April, the North Vietnamese launched a ship-attack mission with specially trained pilots and configured MiG-17 fighters. One MiG-17 achieved near misses with light damage on the Seventh Fleet flagship, USS Oklahoma City (CLG-5). The second MiG scored a direct hit on the after 5-inch gun turret of USS Higbee (DD-806). Fortunately, the turret had been evacuated due to a hang fire, so no one was killed. Damage was serious and excellent damage control saved the ship. Within a couple of months, the destroyed turret would be replaced in Japan and Higbee returned to the gun line. With few exceptions, naval shelling in North Vietnam was restricted to night operations after this attack. 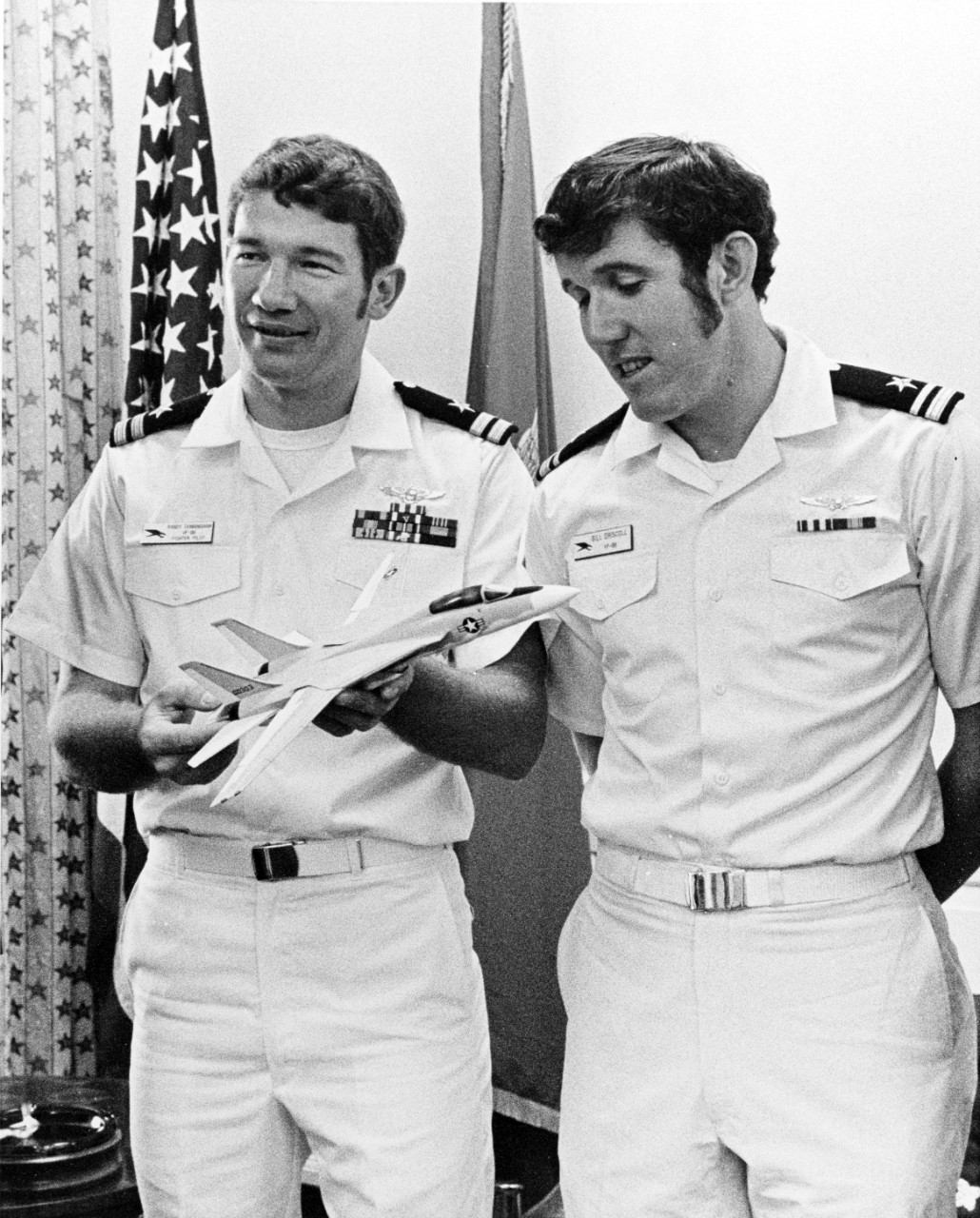 In early May, in response to the continued fierce fighting around An Loc and Kontum, and to the massacre of thousands of South Vietnamese refugees south of Quang Tri (the “Road of Horror”), President Nixon authorized an even greater expansion of the target set, with the primary goal of choking off support for the NVA offensive at the source. For the first time in the war, the Navy was authorized to conduct an offensive aerial mining campaign, something that Navy leaders had been advocating in vain since 1965 in order to stop the previously unimpeded massive supply of war material by sea from the Soviet Union and Communist China. The mining operation was designated Operation Pocket Money, and the overall operation designated Operation Linebacker (later known as Linebacker 1).

Following a final at-sea planning conference for Pocket Money, the commander of Seventh Fleet cruisers and destroyers, Rear Admiral Rembrandt Robinson, was killed along with two of his staff when his helicopter crashed in the water off his flagship USS Providence (CLG-6). Robinson was the only Navy flag officer to die in the Vietnam War zone.

On the morning of 9 May, three Marine A-6s and six Navy A-7s off Coral Sea executed the first aerial mining of Haiphong Harbor, timed to the minute to coincide with a prime- time TV address to the nation by President Nixon announcing the mining and expanded bombing campaign. No aircraft were lost. The mines were set to activate after 72 hours to allow “neutral” ships (which were almost all Communist bloc) to exit the harbor. Only one British and four Soviet ships did so. Pocket Money would continue for the duration of the war, with over 11,000 mines laid in North Vietnamese waters.

The first minelaying mission was supported by naval gunfire on North Vietnamese coastal SAM and AAA sites in the approaches to Haiphong by four destroyers. During the mission, guided-missile cruiser USS Chicago (CG-11) downed a North Vietnamese MiG fighter with a long-range Talos surface-to-air missile. The night after the mission, an even larger shore bombardment near Haiphong occurred, led by the newly arrived heavy cruiser USS Newport News (CA-148), along with Oklahoma City, Providence, and three destroyers.

The first strikes of the Linebacker campaign took place on 10 May and included the epic strike on the Hai Duong railroad yard by Constellation/CVW-9 aircraft. The railroad yard was devastated, but the strike was jumped by two dozen or more MiG fighters. This resulted in the largest air-to-air battle of the war, including some of the most amazing escapes by A-7 and A-6 aircraft. One F-4 was downed by AAA. Six MiGs were shot down during the engagement, during which an F-4 flown by Lieutenant Randall “Duke” Cunningham and radar intercept officer (RIO) Lieutenant (j.g.) William “Irish” Driscoll downed their third, fourth and fifth MiG (making them the first American air aces of the war) before they were shot down by an SA-2 SAM while egressing.

For the rest of May and June 1972, Navy aircraft from six carriers and gunfire from more than two dozen surface combatants pummeled North Vietnamese troops and installations the length of North and South Vietnam, inflicting thousands of NVA casualties in the south and destroying numerous previously “off-limits” targets in the north. The mining operation had immediate effect, as the NVA in South Vietnam began to conserve air defense ammunition and missiles. Although the NVA would hold Quang Tri until September, the offensives at An Loc and Kontum culminated by mid-June and ARVN troops began to push the NVA back, thanks to U.S. air power (and significant ARVN courage).

Linebacker 1 would continue into the fall and Pocket Money until the peace accords were signed in early 1973. The rest of the considerable U.S. Navy action in 1972 will be covered in a future H-gram. The actions of Navy aircraft and surface ships in defeating the NVA offensive arguably represent one of the U.S. Navy’s finest hours since World War II. More detail on more amazing actions can be found in attachment H-070-1. My suggestion would be to take a minute to honor our Vietnam War Navy veterans who performed with such skill and courage (when the rest of the country mostly didn’t care) by taking some time to read what they did.