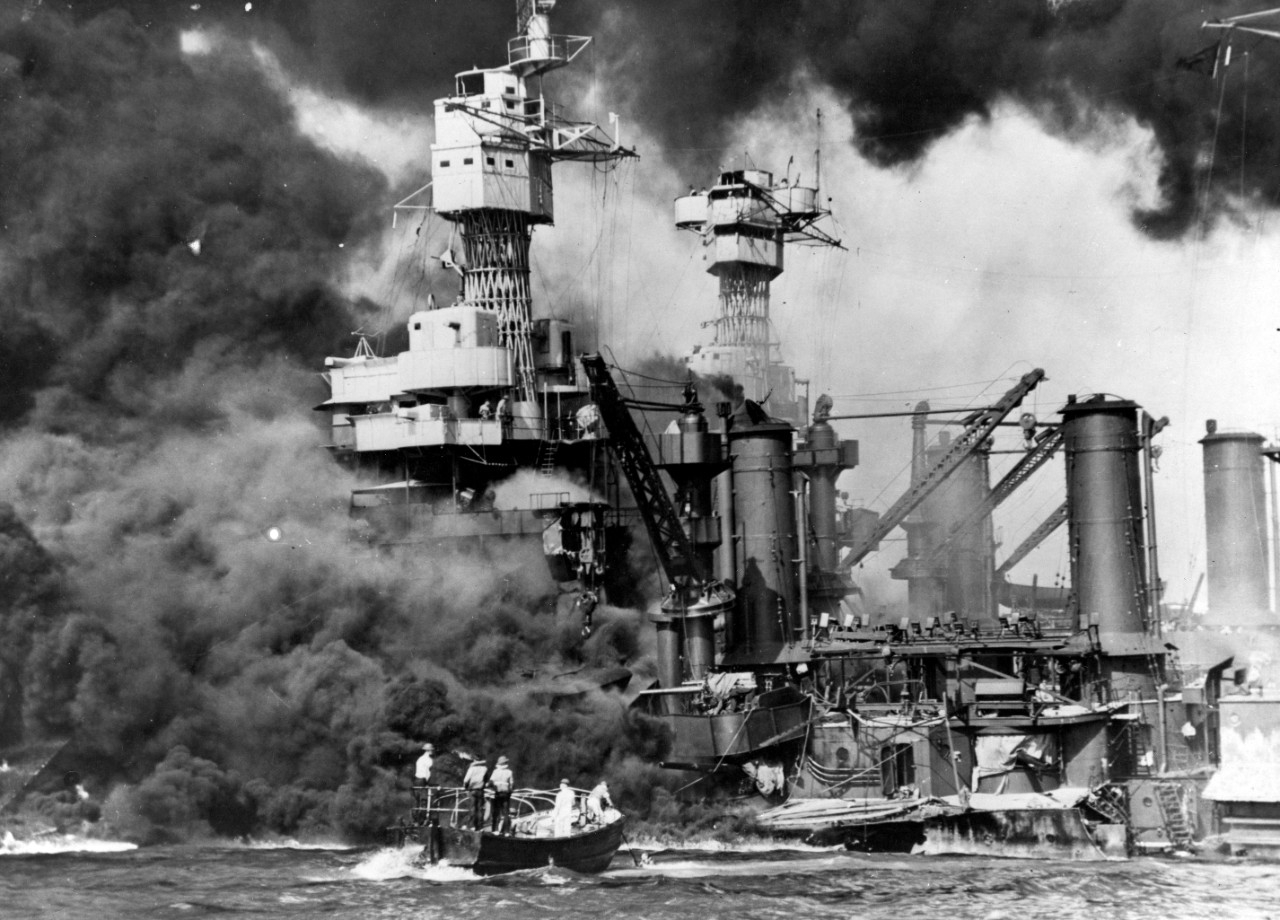 Sailors in a motor launch rescue a survivor from the water alongside the sunken USS West Virginia (BB-48) during or shortly after the Japanese air raid on Pearl Harbor. USS Tennessee (BB-43) is inboard of the sunken battleship. Note extensive distortion of West Virginia's lower midships superstructure, caused by torpedoes that exploded below that location. Also note 5-inch/25-caliber gun, still partially covered with canvas, boat crane swung outboard and empty boat cradles near the smokestacks, and base of radar antenna atop West Virginia's foremast (80-G-19930).

This H-gram covers the Japanese attack on Pearl Harbor and is a significantly updated and revised version of my H-Gram 001 from 2016, with one additional portion drawn from H-Gram 025 from 2019. It also includes some history of the Naval History and Heritage Command.

80th Anniversary of the Japanese Attack on Pearl Harbor, 7 December 1941

At Dawn We Slept was the title of one of the most influential books about the disastrous Japanese surprise attack on Pearl Harbor on the morning of 7 December 1941, "a date which will live in infamy" as President Franklin Roosevelt called it in his declaration of war speech. However, I respectfully disagree with the premise of the title, as it gives the impression that the U.S. Navy was lying around the beach drinking chilled cocktails and was totally unprepared for the outbreak of war. The reality is somewhat different.

To the extent that anyone in the Navy in Hawaii was asleep on the morning of 7 December, it was a sleep of exhaustion from months of intensive exercises and preparations for a war that everyone in a position of senior leadership knew was imminent, particularly the commander-in- chief of the U.S. Fleet and Pacific Fleet, Admiral Husband Kimmel. The story of Pearl Harbor as it is now usually told in popular culture—that the United States was not expecting to be attacked—has led to a sense of complacency today, a sense that we could never be so stupid or unaware as we were back then.

The reality is that the story of Pearl Harbor actually represents the razor-thin line between defeat and victory against a highly capable adversary. It is a story of an extremely intense effort to get ready by some very smart people, with decisions that were made with great deliberation and purpose, some of which proved incorrect, but were not due to complacency. It is a story of an incredible readiness effort that was heartbreakingly close to success, but that still failed. And it should also be noted that virtually every carrier-based strike in World War II—U.S., Japanese, and British—achieved tactical surprise, as did the multiple carrier strike exercises conducted on Pearl Harbor in the interwar years.

Fleet Admiral Chester Nimitz would write years after the war: “I have been correctly quoted in saying that it was God’s divine will that Kimmel did not have his fleet at sea to intercept the Japanese Carrier Task Force that attacked Pearl Harbor on 7 December 1941.” Nimitz went on to explain that had the fleet been at sea, it would have suffered catastrophic losses to the superior Japanese carrier force, with ships sunk in deep water with the loss of far more of their crew. “As bad as our losses were…, they could have been devastating worse,” Nimitz wrote. As it was, only two of the eight battleships present never fought again (Arizona [BB-39] and Oklahoma [BB-37]). Of the other six, West Virginia (BB-48), California (BB-44), and beached Nevada (BB-36) were all raised, modernized, and rejoined the war. The relatively minor damage to Pennsylvania (BB-38), Tennessee (BB-43), and Maryland (BB-46) was quickly repaired. With the exception of obsolete target battleship Utah (AG-16), all other ships were repaired and returned to service. Had these ships been sunk in deep water, the death toll would have been vastly higher.

Admiral Kimmel’s fundamental dilemma was whether to keep the fleet at sea with no air cover, or bring the fleet into port with what was known to be inadequate air cover. Both carriers (Lexington [CV-2] and Enterprise [CV-6]) were away on national -directed missions to take fighters, stripped from Pearl Harbor’s inadequate defenses, to Midway and Wake Island. Based on intelligence, Kimmel correctly assessed that the fleet faced an imminent major submarine threat, and was well aware of the possibility of air attack (there were about a dozen major air attack drills between March and November 1941). Admiral Nimitz, at least, believed that Kimmel made the correct decision.

Unfortunately, the “communication” piece of the command, control, and communication (C3) architecture on Oahu (which had worked reasonably well in multiple exercises) in both the Navy and Army failed the test of wartime operations on 7 December 1941. Kimmel would take the fall for the disaster, while many others equally or more responsible in Washington survived the massive CYA operation afterward. The real person responsible for the defeat at Pearl Harbor was Admiral Isoroku Yamamoto and his really good (albeit not perfect) plan. (Please see the revised attachment H-001-1 for more info related to U.S. Navy preparations for war.)

The ship whose duty it was to be on alert that morning, was on alert, and performed her duty in an extraordinarily effective and efficient manner. The elderly Ward (DD-139) sank a Japanese midget submarine (probably launched from mother submarine I-20) attempting to gain access to the harbor a little over an hour before the air raid commenced (but 45 minutes after the Japanese strike had already launched). In doing so, Ward fired the first shot of the battle, the first U.S. shot of World War II in the Pacific, and with her second shot achieved the first kill. Unfortunately, in the high-stakes “telephone tag” that followed, precious warning time was lost, although in actuality it was already too late to have made much of a difference.

In an ironic twist of fate, the commanding officer of Ward on 7 December 1941, Lieutenant William Outerbridge, would later have the sad task, as commanding officer of O’Brien (DD-725), of scuttling the crippled Ward, hit by a kamikaze, with gunfire in Ormoc Bay, Philippines, on 7 December 1944. (Please see the revised attachment H-001-2 for more on Ward, the warning process, and the Japanese midget sub operations.)

Although Pearl Harbor was a devastating tactical defeat resulting in 2,335 U.S. military and 68 U.S. civilian deaths, the vast majority of Navy sailors responded immediately and in many cases with extraordinary acts of bravery, many of which were unrecorded due to the deaths of so many witnesses. Even so, Navy personnel were awarded 15 Medals of Honor (10 posthumously), 51 Navy Crosses, and four Navy-Marine Corps Medals. These were the most Medals of Honor awarded for bravery under fire for a one-day action in U.S. naval history.

Medal of Honor recipients included: Rear Admiral Isaac Kidd and Captain Franklin Van Valkenburgh, killed at their post on the bridge of Arizona when she exploded; Captain Mervyn Bennion, skipper of the battleship West Virginia, who attempted to continue to fight his ship even after being mortally wounded by shrapnel; Commander Cassin Young, skipper of the repair ship Vestal (AR-4) moored alongside Arizona, blown clear off the bridge of his ship into the water, who nevertheless climbed back on board and got his sinking ship underway and beached her so she would not be an obstruction.

Other Medal of Honor recipients included Chief Warrant Officer (Boatswain) Edwin Hill of Nevada, the only battleship to get underway during the attack. He crossed to the mooring pier, cast off the lines, swam back to ship and got on board, and was leading actions on the forecastle in preparation to beach the ship, which had attracted numerous Japanese dive bombers, when he was killed by strafing and bomb explosions.

Among the Navy Cross recipients was Ensign Joe Taussig, Jr. (son of Commander, and later vice admiral, Joe Taussig of World War I "We are ready now" fame), who continued to direct Nevada’s anti-air defenses even with a leg-amputating wound. Another Navy Cross was awarded to Mess Attendant Second Class Doris Miller for aiding the dying Captain Mervyn Bennion on West Virginia under fire, before manning a .50-caliber machine gun, on which he had not been trained, and assisting in downing possibly one or more Japanese aircraft. Miller was the first African American sailor to receive the Navy Cross. Of note, Miller's actual battle station, in the ammunition-handling room for the port-side 5-inch guns, was destroyed by one of the first torpedoes to hit West Virginia, which is why he ended up on the bridge. (See the revised attachment H-001-3 for more on valor at Pearl Harbor. See the revised attachment H-025-1 for more on Doris Miller.)

50th Anniversary of the Establishment of the Naval Historical Center

Naval History and Heritage Command was established as an Echelon II Navy command in 2008. However, parts of the command date all the way to 1800 with the establishment of the Navy Department Library by order of President John Adams, which is still part of the command today. Over the centuries, the Navy’s history enterprise has gone through multiple incarnations, sometimes within the Office of the Secretary of the Navy, sometimes as part of the OPNAV staff, and for long periods of time under the Chief of Naval Intelligence. A significant development in the evolution of NHHC was the establishment of the Naval Historical Center (NHC) 50 years ago on 1 December 1971 under Vice Admiral Edwin B. Hooper. NHC formed the nucleus of the much broader capability of NHHC today. (For more on the evolution of NHHC and a better sense of our mission today, please see attachment H-066-1.)