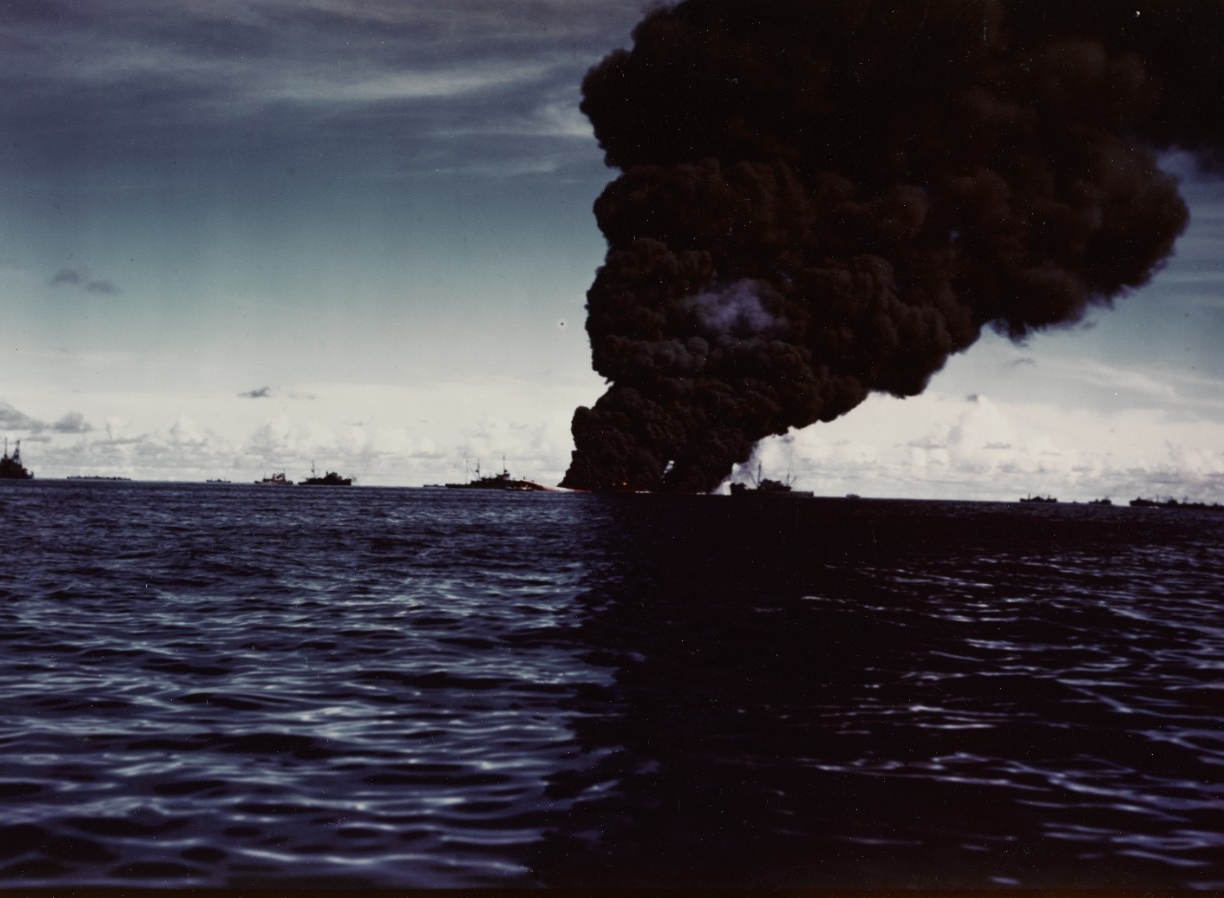 USS Mississinewa (AO-59) sinking at Ulithi, 20 November 1944, after being struck by a Japanese Kaiten Type 1 manned torpedo. The capsized ship's bottom can be seen at the base of the flames and smoke pillar, with bow or stern toward the left (80-G-K-5510).

At 0547 on 20 November 1944, the fully laden 11,000-ton oiler USS Mississinewa (AO-59) was anchored at Ulithi Atoll when a manned Kaiten suicide torpedo hit her, resulting in a massive explosion. A second huge explosion occurred seconds later when fumes in an aviation gasoline tank detonated. Mississinewa was quickly engulfed in flames, which triggered another explosion in her after magazine. Captain Philip G. Beck quickly realized the ship was beyond hope and, as he dragged an unconscious sailor to safety, he gave the order to abandon ship. Captain Beck was in the last group of five men known to have abandoned the ship about 15 minutes after the first explosion. Fleet tugs attempted to extinguish the fire, but at about 0900 Mississinewa rolled over and sank. Of the 20 officers and 278 enlisted men in Mississinewa’s crew, 63 were lost. This was the first successful attack by a Kaiten manned torpedo. Nevertheless, the Kaiten program was a miserable failure, despite the courage of the pilots who rode the torpedoes to their deaths, with very few successes.

The Kaiten mission against Ulithi Atoll in November 1944 was the first such mission. At the time, the large lagoon (about 22 miles by 15 miles) inside the reef of Ulithi was the major U.S. Navy forward operating base in the Western Pacific, and it was often jammed with U.S. carriers and other elements of Admiral Halsey’s Third Fleet at the end of 1944 and into 1945. Numerous supply, repair, and support vessels were located at Ulithi, while Halsey’s fast carrier task groups roamed the Western Pacific, repeatedly striking Japanese targets. Oilers would pick up fuel at Ulithi and refuel the carriers and other ships at sea. Although carrier task groups would rotate back to Ulithi for rest and repair, other carrier task groups continued operating. This made Ulithi a potentially lucrative target for attack, if the Japanese could find a way to get at it.

As the Japanese became increasingly desperate in 1944, ideas for manned torpedoes that had been previously rejected were then seriously considered. Actual development of the Kaiten began in February 1944. The first prototype was ready at the end of July 1944. Although six models were developed, only the Type 1 was ever operationally employed.

The Type 1 Kaiten was essentially a Type 93 oxygen-fueled torpedo (termed the “Long Lance” after the war) with a bigger warhead and, for the pilot, a compartment that included a small periscope, steering controls, controls to arm and detonate the weapon, batteries, and air filter. The Type 1 had a 3,420-pound warhead, a speed of 12 knots cruising and 30 knots maximum, a maximum range of 42 nautical miles, and a maximum operating depth of 250 feet. Kaiten were prone to leaks in the pilot’s compartment and to spontaneous explosions caused by water seeping into the torpedo engine; none of these problems was ever resolved. The earliest Type 1 Kaiten had the capability for the pilot to escape as the torpedo neared the target, but this feature was never used; in the production models, the pilot was locked in. A theoretical advantage of a Kaiten was that if the first attempt to hit a target failed, the pilot could maneuver and attempt another attack. However, if the Kaiten failed to find a target, the pilot would either sink with the weapon or activate a self-destruct to detonate the warhead.

Kaiten were carried piggyback aboard modified conventional submarines. Different types of submarines were modified and generally could carry two or four Kaiten, although some submarines were configured to carry six of the weapons. On some submarines, the pilot could access the Kaiten via a connection tube, and the Kaiten could be launched while the mother submarine remained submerged. Once the Kaiten launched, however, there could be no return. The Kaiten had significant depth restrictions, which also applied to the mother submarine when the Kaiten were embarked. This proved to be a major vulnerability and was a factor in eight Kaiten-carrying submarines being sunk (along with 846 crewmen on the mother submarines, in addition to the Kaiten pilots). Some training versions were configured to carry two or even four crewmen, and losses during training accidents were fairly high, usually caused when a training Kaiten collided with the practice target ship. All told, about 330 Type 1 Kaiten were produced, and about 100 were used, with very little success, despite Japanese reports and propaganda that wildly inflated the results.

The first operational Kaiten mission commenced on 8 November 1944, when the Kikusui-tai Kaiten Group departed from Otsujima, Japan. The group consisted of the submarines I-47, I-36, and I-37,    each piggybacking four Kaiten, and each also armed with eight conventional torpedoes. The plan called for I-47 and I-36 to attack Ulithi Atoll with the Kaiten, while I-37 attacked a different anchorage near Palau. After launching the Kaiten, the submarines were to proceed to Leyte Gulf to conduct conventional attacks on U.S. shipping supporting General MacArthur’s ongoing operations on Leyte.

On 16 November 1944, a Truk-deployed Nakajima C6N1 “Myrt” high-altitude reconnaissance aircraft overflew Ulithi and reported four fleet carriers, three battleships, and numerous cruisers and destroyers in the northern part of the anchorage, and numerous oilers, transports, and supply ships in the southern and central sections. This intelligence was passed to the Kikusui-tai Group. By the morning of 19 November, I-47 and I-36 had reached the area of the atoll. At dawn, I-47 approached to within 4.5 nautical miles of Ulithi and reported seeing over 200 U.S. ships in the anchorage inside the reef.

At 0030 on 20 November, I-47 surfaced so that the pilots of two Kaiten could enter (only two of the four Kaiten were connected by underwater access tubes). In the 0300 hour, I-47 launched all four Kaiten. The first  to be launched was piloted by Lieutenant (j.g.) Sekio Nishina, the co-inventor of the Kaiten torpedo. He was carrying the ashes of Hiroshi Kuroki, the other co-inventor, who had been killed in a training accident. It is believed that this Kaiten hit Mississinewa. Although this Kaiten was sighted and reported heading for Mississinewa by alert lookouts on USS Cache (AO-67) and USS Lackawana (AO-40), there was no time to react since the ships were at anchor. Destroyer USS Case (DD-370), on patrol at the entrance to the channel, rammed and sank one of the other Kaiten. Another ran aground on the reef. Another made it into the lagoon, but was lost, probably sunk by depth charges as ships reacted to the explosion on Mississinewa.

I-36 conducted a similar routine as I-47, except that the two Kaiten connected by access tubes were stuck and would not release, and a third Kaiten developed a heavy leak in the pilot’s compartment. Only one Kaiten from I-36 was successfully launched, but it was never heard from again. Even so, the Japanese credited pilot Ensign Imanishi with sinking an aircraft carrier. I-36 surfaced to recover the one pilot still stuck in his Kaiten and was quickly attacked by two Avenger torpedo bombers on antisubmarine warfare patrol; she crash-dived without damage.

On 23 November, another Myrt reconnaissance mission over Ulithi reported a large oil slick, but no other discernable change to ship disposition. Nevertheless, at a staff conference of the Japanese Sixth Fleet (Submarine Force), the Japanese reviewed the reconnaissance reports, including I-47’s post-attack periscope report of a massive pall of smoke over Ulithi, and concluded that three aircraft carriers and two battleships had been sunk, and that the Kaiten mission had been a great success. On 24 November, I-47 and I-36 were directed to return to Japan to prepare for additional Kaiten attacks rather than proceeding to Leyte Gulf.

I-47 and I-36 were among the few Japanese submarines to survive the war. Although I-47’s crew initially refused the Emperor’s order to surrender, a lack of fuel prevented her from commencing a rogue operation. I-37 wasn’t so lucky. On 19 November at 0858, 12 hours before she was to launch her four Kaiten at Kossol Roads, Palau, I-37 was sighted by the net-laying ship USS Winterberry (AN-56). Later in the day, destroyer escorts USS Conklin (DE-439) and USS McCoy Reynolds (DE-440) located I-37 and, after an hour of attacks, finally sank her with all hands, along with the four Kaiten.

During the rest of the war, the Japanese conducted 10 major Kaiten operations. The most significant success was sinking the destroyer escort USS Underhill (DE-682) on 24 July 1945, with a loss of 113 of her crew (to be covered in a future H-gram). Besides Underhill and Mississenewa, the only other U.S. ship sunk by a Kaiten was infantry landing craft LCI-600, with the loss of three men. Several other ships were damaged. These losses cost the Japanese eight Kaiten-carrying submarines and their crews, 106 Kaiten pilots (including 15 killed in training and two who committed suicide at the end of the war). A significant number of maintenance and support personnel (156) were also lost, presumably mostly on the sunken mother submarines. 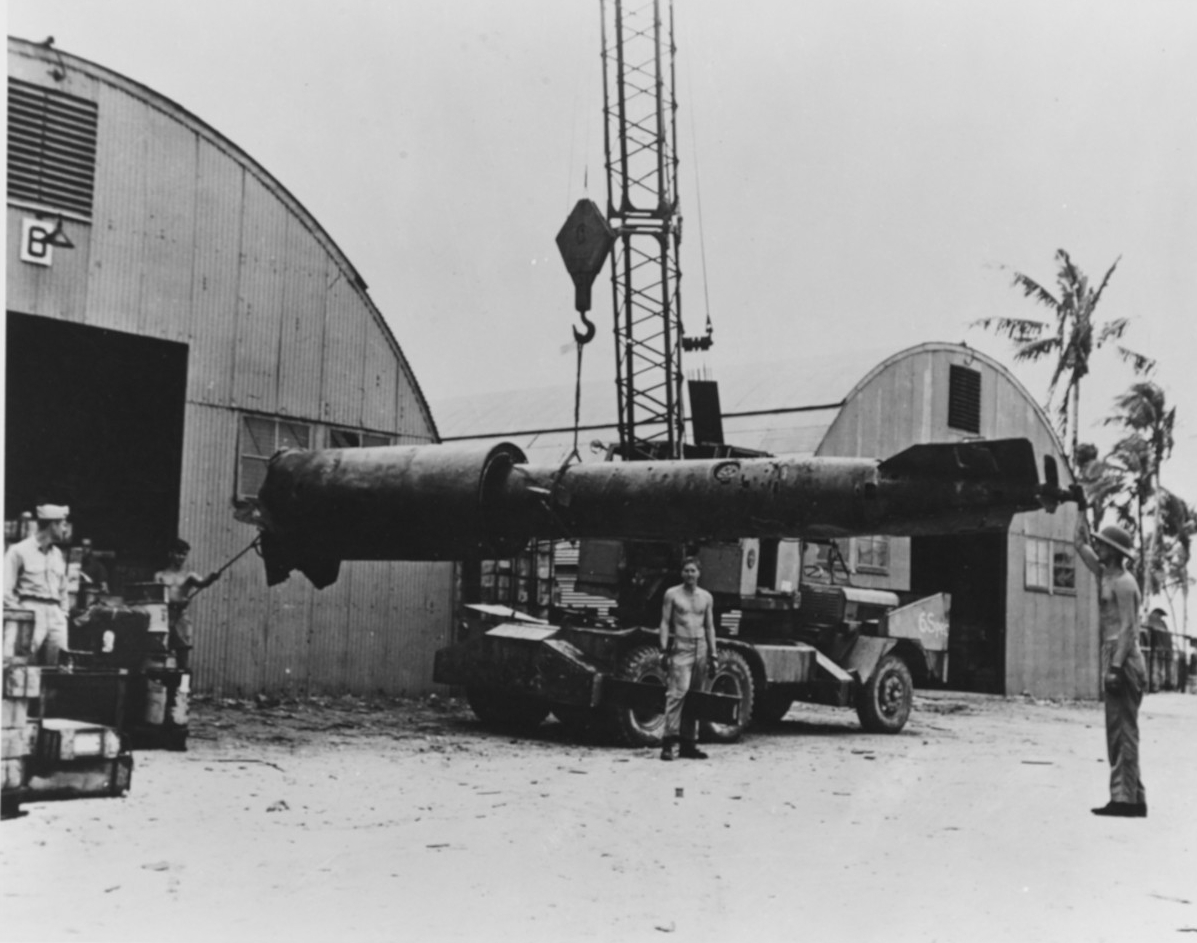 Japanese Kaiten Type 1 manned torpedo after recovery by U.S. forces at Ulithi Atoll in 1945. This is the after half of the Kaiten. The forward portion, including warhead, forward oxygen and fuel tanks, and the crew compartment, is missing and may have been destroyed in an explosion of the warhead (80-G-350027).