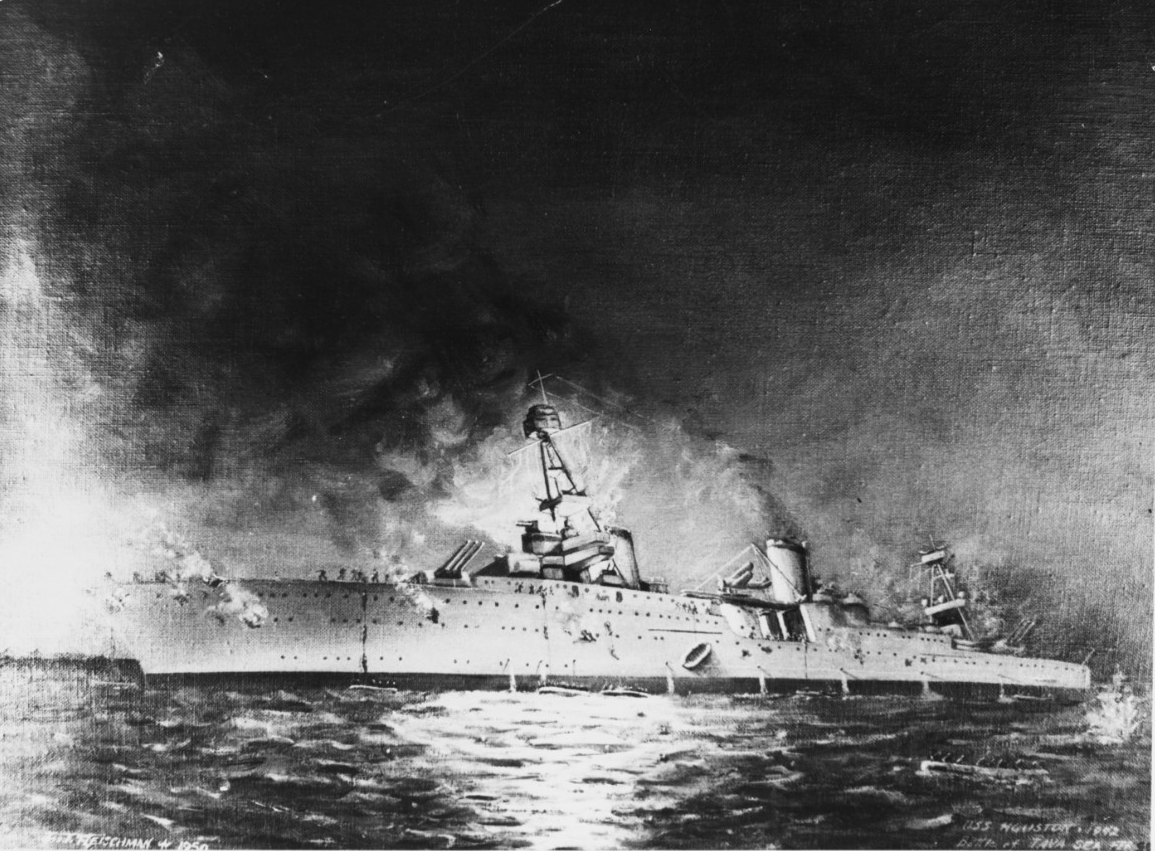 This H-gram covers two U.S. Navy heroes: Captain Albert Rooks, commanding officer of the heavy cruiser USS Houston (CA-30), lost in a valiant action against an overwhelming Japanese force in the Battle of Sunda Strait on 28 February/1 March 1942; and Aviation Machinist’s Mate First Class Bruno Gaido, of Scouting Squadron 6 (VS-6) embarked on USS Enterprise (CV-6), decorated for actions during the carrier raids on the Marshall Islands on 1 February 1942 and the Battle of Midway on 4 June 1942.

“They Sold Their Lives Dearly” is the title of a Tom Freeman painting that hangs in the entrance to my office at Naval History and Heritage Command. The painting shows USS Houston under a deluge of shellfire, her own guns are blazing away as she is surrounded by an overwhelming Japanese force while attacking the Japanese invasion fleet off Java on the night of 28 February/1 March 1942. It took 87 Japanese torpedoes to put Houston and her consort, Australian light cruiser HMAS Perth, under, and in the chaotic melee, Japanese torpedoes sank four of their own troop transports.

The skipper of Houston, Captain Albert H. Rooks, was a hero of mine long before I joined the U.S. Navy, when I first started reading naval history, on par with Commander Ernest Evans. A brilliant officer, strategic thinker, and exceptional ship handler, Rooks was destined for high flag rank, greatly respected by superiors, and most tellingly, revered by his crew for his no-nonsense leadership, and most importantly, his handling of the ship in combat. Although the odds of running the Japanese gauntlet in Sunda Strait that night were very slim, Captain Rooks had to choose whether to flee or to fight. Along with Captain Hec Waller on Perth, Captain Rooks chose to fight.

The battle lasted a couple hours. Critically low on ammunition before the battle even began, both Allied ships fought with unbelievable valor. However, without escorting destroyers, they were at a severe disadvantage to Japanese “Long Lance” torpedoes from about a dozen destroyers and the 8-inch guns of two Japanese heavy cruisers hidden in the darkness.

Despite amazing ship handling in avoiding many torpedoes, both Allied ships were finally hit and disabled. Still, both ships kept fighting until they were out of gun ammunition, and even then kept fighting as a swarm of Japanese vessels closed within machine-gun range. Both Waller and Rooks were killed by Japanese shellfire shortly after giving the order to abandon their sinking ships.

Houston finally went down with a machine gun still firing and her national ensign still flying high, bathed in the light of star shells and searchlights. The fighting was so ferocious that one of Houston’s few survivors may have summed it up best: “We didn’t have a problem with sharks that night. Even they were dead.” Of Houston’s 1,168 men, only 368 survived the battle, and until the 291 survivors emerged from Japanese captivity at the end of the war, no one in the United States really knew what had happened in the Sunda Strait. Captain Rooks was awarded a Medal of Honor while in missing-in-action status for his actions before the Battle of Sunda Strait even began.

Aviation Machinist Mate First Class (then Third Class) Bruno Peter Gaido distinguished himself as a member of Scouting Squadron 6 (VS-6) during the raid on the Japanese-held Marshall Islands by the carrier USS Enterprise (CV-6) on 1 February 1942. During an attack by Japanese land-based bombers, the lead bomber was hit and commenced a suicide dive on Enterprise. Gaido jumped into the gunner’s seat of a parked SBD Dauntless dive bomber on the flight deck and used the aircraft’s rear guns to pour accurate fire into the cockpit of the Japanese bomber intent on crashing into the carrier. Finally out of control, the bomber barely missed a direct hit. The wing of the cripple bomber dragged across the flight deck and cut the tail off Gaido’s plane, yet Gaido continued to fire until the plane crashed alongside the ship. Gaido then calmly extinguished a gasoline fire left by the bomber remnants.

As always, you are welcome to disseminate H-grams widely. A complete listing may be found here.