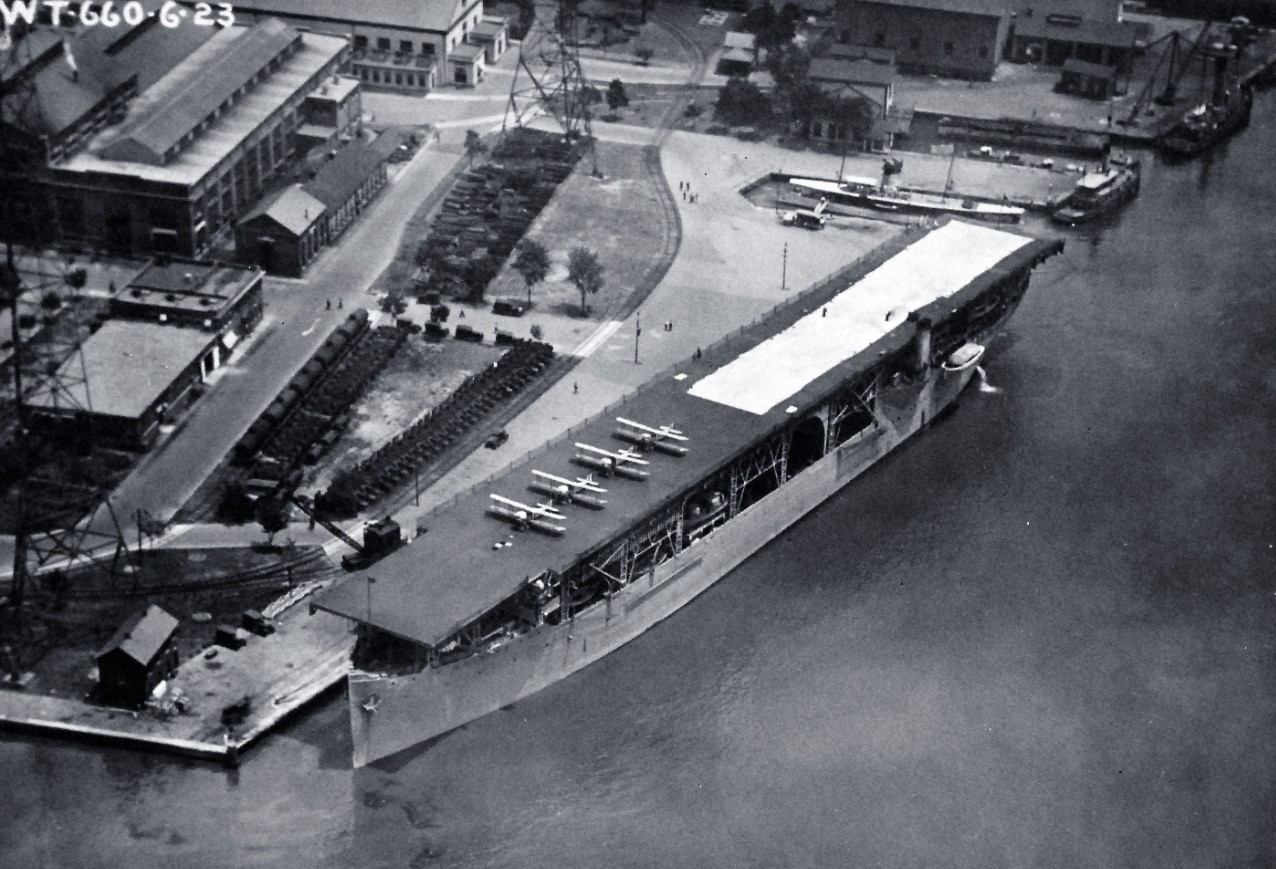 This H-gram covers the origin and history of the first U.S. Navy aircraft carrier, USS Langley (CV-1), commissioned 100 years ago on 20 March 1922, and a short piece for Vietnam War Veterans Day.

The first attack in history by aircraft based at sea was by a French-designed floatplane from a Japanese seaplane tender (converted from a captured Russian transport) against an Austro-Hungarian cruiser in the German naval base in Tsingtao, China, in September 1914. Moreover, the only operational German aircraft at Tsingtao shot down one of the Japanese floatplanes with a pistol, marking the first air-to-air combat kill in history.

If this wasn’t strange enough to make you want to read on, consider that all three sister ships of the collier USS Jupiter (AC-3) were lost without a trace in the “Bermuda Triangle”: USS Cyclops (Fuel Ship No. 4) in 1918, and Proteus (AC-9) and Nereus (AC-10) (both in commercial service) in 1941, with no evidence that any of them were sunk by German U-boats.

Jupiter survived to be converted to the first U.S. aircraft carrier, USS Langley. She was named after someone who actually had nothing to do with naval aviation other than catapulting unmanned and manned steam-driven flying machines off a barge, most of which crashed into the Potomac, and who was erroneously given credit for the first sustained manned powered flight. Jupiter was the first ship to transit west to east through the Panama Canal, but more importantly, was the first U.S. Navy ship with turbo-electric propulsion, a major factor in her selection for conversion to a carrier (besides the fact that Cyclops had vanished). In an ironic twist, Jupiter’s first commanding officer was Commander Joseph “Bull” Reeves, who at the time had nothing to do with naval aviation, but who would later become known as the “father of carrier aviation” in the U.S. Navy.

The idea of a “flattop” aircraft carrier, with offset “island” superstructure, deck elevators, and a hangar bay originated with a French author in 1909. The idea competed with seaplane carriers and tenders (the first seaplane was invented in 1910, also by the French). Bombs carried by seaplanes and aircraft of the time were close to useless against armored warships. In 1910, a U.S. naval officer, then-Captain Bradley Fiske, conceived the idea of using aircraft to launch aerial torpedoes. However, aircraft with enough power to carry a big enough torpedo weren’t developed until 1912, and Congress in its wisdom refused to fund aerial torpedo research until 1917, giving the Italians, French, Russians, Japanese, and especially the British, a head start in developing and employing a truly dangerous airborne weapon system.

During World War I, the British forged ahead with using seaplanes from seaplane carriers to bomb a German Zeppelin base (on Christmas Day 1914) and sinking Turkish supply ships with aerial torpedoes during the Gallipoli campaign in 1915. British actions culminated with the first strike launched from an aircraft carrier, when six Sopwith Camel variants from HMS Furious bombed and destroyed two German Zeppelins at Tondern, Germany (now Denmark), in July 1918. Nevertheless, U.S. Navy visionaries, such as Kenneth Whiting, convinced Navy leadership to convert a collier to an aircraft carrier. This project was funded in 1919 in the FY1920 Naval Appropriations Act, and became Langley, commissioned on 20 March 1922 (Commander Kenneth Whiting in command).

Ultimately, Langley would end up in the same place as her three sister colliers, at the bottom of the ocean, a victim of Japanese navy horizontal bombers in February 1942 south of Java (and of subsequent scuttling by U.S. destroyer torpedoes). Almost all of Langley’s crew were rescued by destroyers and transferred to oiler USS Pecos (AO-6), aboard which almost all of them died along with most of Pecos’ crew when that ship was sunk by Japanese carrier dive-bombers two days later. So, unlike the complements of her collier sisters, not all of Langley’s crew perished. Despite her tragic end, the lessons learned and technical improvements, procedures, tactics, and doctrine developed aboard Langley in the 1920s were major factors in enabling the U.S. carrier force to vanquish the Imperial Japanese Navy (and German U-boats) in World War II.

Many of the innovations from Langley are still utilized in the U.S. carrier force today, such as colored jerseys; the PLAT (pilot aid landing television) camera; tailhooks; the landing signal officer (LSO); the left-hand recovery pattern; the net for LSOs to jump into when things are looking really bad; deck lights for night recoveries; standardized hand signals—not to mention catapults and arresting gear developed through trial and error on Langley and many other examples of U.S. Navy ingenuity. Early flight operations off Langley were exceedingly dangerous (the pilot who made the first “trap” died a few days later following a crash in a routine short transit flight). In summary, the U.S. Navy’s carrier force today owes much to the courage and sacrifice of the early naval aviators and observers who literally invented carrier aviation on the fly on board the ship nicknamed “The Covered Wagon.”

For more on the origin of aircraft carriers and the USS Langley, please see attachment H-069-1.

This 29 March marked the annual National Vietnam War Veterans Day, an opportunity for all of us to pay our respects and gratitude to those who served our country and did their duty to the fullest in that war. Fifty-years ago, on 30 March 1972, one of the most violent phases of the war commenced with the massive North Vietnamese multi-front conventional invasion known as the “Easter Offensive.” This invasion, complete with armored forces, initially gained significant ground, and had South Vietnamese forces on the ropes. With almost all U.S. ground forces already withdrawn from the country, the burden of stopping the North Vietnamese offensive fell to U.S. airpower, and in particular U.S. carrier aviation, which quickly grew from two carriers to—at one point—six carriers (the greatest concentration of carrier airpower since World War II to that time). Despite being hampered by monsoon conditions, U.S. air power first blunted and then beat back the North Vietnamese.

The next months in 1972 saw the resumption of the bombing campaign in North Vietnam (Operation Linebacker I) conducted with fewer restrictions than Operation Rolling Thunder had been, and therefore more effectively. It also included the greatest number of U.S. Navy versus North Vietnamese air-to-air engagements (with a lopsided Navy kill-ratio advantage) and the only Navy aces of the war. It also included the largest U.S. Navy aerial mining campaign in history (Operation Pocket Money), in which U.S. carrier aircraft mined North Vietnamese ports, finally choking off the supply of weapons and war material from the Soviet Union and much from Communist China. Finally, it encompassed some of the most audacious U.S. Navy surface force actions, such as Operation Lion’s Den into the approaches to Haiphong Harbor.

Regrettably this H-gram is running behind schedule, but stay tuned for more on some of the most significant U.S. Navy actions of the post–World War II period, many little known thanks to our national amnesia about the Vietnam War.

Further dissemination of H-grams is welcomed. “Back issue” H-grams may be found here.