H-Gram 047: The Last Battle of the Atlantic—Operation Teardrop 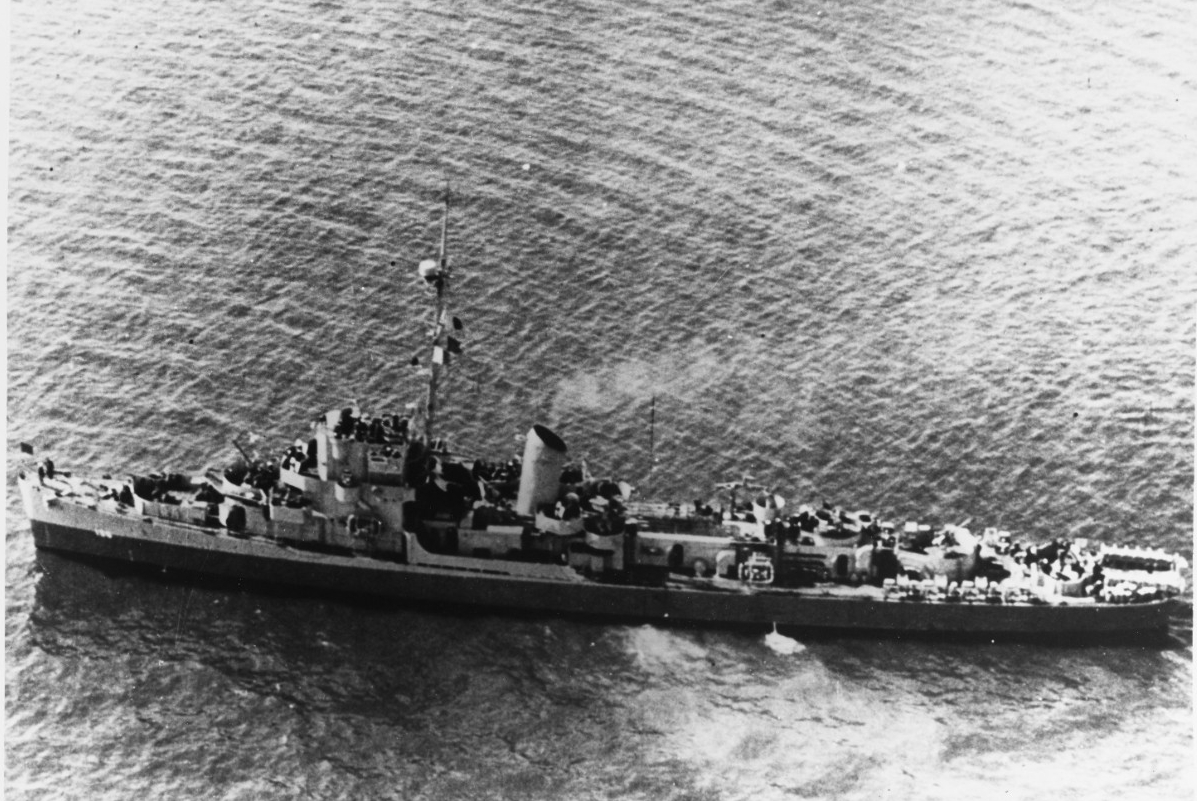 This H-gram covers the last German U-boat offensive in April 1945, the U.S. Navy response (Operation Teardrop), and the last sinkings of U.S. warships and German U-boats in the Western Atlantic.

In remembrance of Boatswain’s Second Class Mate Lonnie Whitson Lloyd, the last U.S. Navy Sailor to die in combat in the Atlantic/European Theater as a member of the U.S. Naval Armed Guard aboard the last U.S.-flagged merchant ship sunk in the Atlantic, the collier Black Point. She was torpedoed and sunk by U-853 off Block Island, Rhode Island on 5 May 1945 with a loss of 12 of her crew of 46.

U-881 was the last German U-boat sunk by U.S. forces, lost with all hands on 6 May 1945 at about 0500 after probably having failed to receive the 4 May 1945 German order to cease hostilities on effective 5 May.

In April 1945, based on Ultra code-breaking intelligence of German Enigma-encrypted messages, U.S. Navy leaders had good information about a wolfpack of six (and then seven) German U-boats (”Gruppe Seewolf”) headed to the U.S. East Coast. However, a German disinformation campaign gave indication that the submarines were armed with V-1 pilotless “buzz bombs” or even V-2 ballistic rockets. Although both U.S. and British intelligence discounted this possibility, no one was willing to take any chances that submarine-launched rockets could hit U.S. cities. A major U.S. Navy effort, code-named Operation Teardrop, was mounted to intercept and destroy the U-boats of Gruppe Seewolf before they could reach potential launch positions.

Operation Teardrop included two “barrier forces,” each with two escort carriers and about 20 destroyer escorts. Each barrier force could only cover about 120 nautical miles, so the success of the operation depended heavily on intelligence and sources such as high-frequency direction finding (HF/DF) to be in the right place at the right time. Beginning 15 April, the First Barrier Force had good initial success, sinking three of the first six Gruppe Seewolf U-boats in quick succession far out in the mid-Atlantic despite very heavy seas and thick fog that severely degraded anti-submarine air operations.

The Second Barrier Force relieved the first on 21 April, setting up a blocking line closer to the United States, and came close to sinking two more U-boats. However, on 24 April, U-546 was attempting to penetrate the screen of escort carrier Core (CVE-13), when she was detected at close range by destroyer escort Frederick C. Davis. U-546 got off the first shot with an acoustic homing torpedo that hit Frederick C. Davis, causing her to break in two and sink in a matter of minutes with heavy loss of life including the commanding officer. Frederick C. Davis was the last U.S. Navy warship sunk in the Atlantic Theater. Nine destroyer escorts then relentlessly hounded U-546 for almost 12 hours before forcing her to the surface, sinking her with gunfire, and then rescuing 33 of U-546’s crew. Once ashore, however, several of the crewmen of U-546, including the commanding officer, were subjected to severe beatings in an attempt by U.S. interrogators to extract information about rockets and missiles aboard German U-boats, of which the crew had no knowledge since there weren’t any.

Although Operation Teardrop was focused on Gruppe Seewolf, other German U-boats were operating independently off the U.S. East Coast in March and April 1945, most with little success and all of them eventually sunk. An exception was U-853, known as “Moby Dick” for previous escapes, which sank the Eagle-class patrol boat PE-56 only three miles off the the Maine coast near Brunswick on 23 April. Only 13 of PE-56’s crew of 67 survived. The Navy initially deemed the loss to be the result of a boiler explosion and it wasn’t until 2001 that PE-56 was confirmed as a combat loss, making her the second-to-last U.S. Navy vessel sunk in the Atlantic Theater. U-853 would subsequently sink the collier Black Point off Narragansett Bay on 5 May, hours after Grossadmiral Karl Doenitz had directed all German submarines to cease hostilities. Black Point was the last U.S.-flagged ship sunk in the Atlantic Theater. U-853 was, in turn, sunk off Block Island in the pre-dawn hours of 6 May 1945, making her the second-to-last U-boat sunk by U.S. forces. U-881 would be the last U-boat sunk by the U.S. Navy, a few hours later on 6 May by the Second Barrier Force. 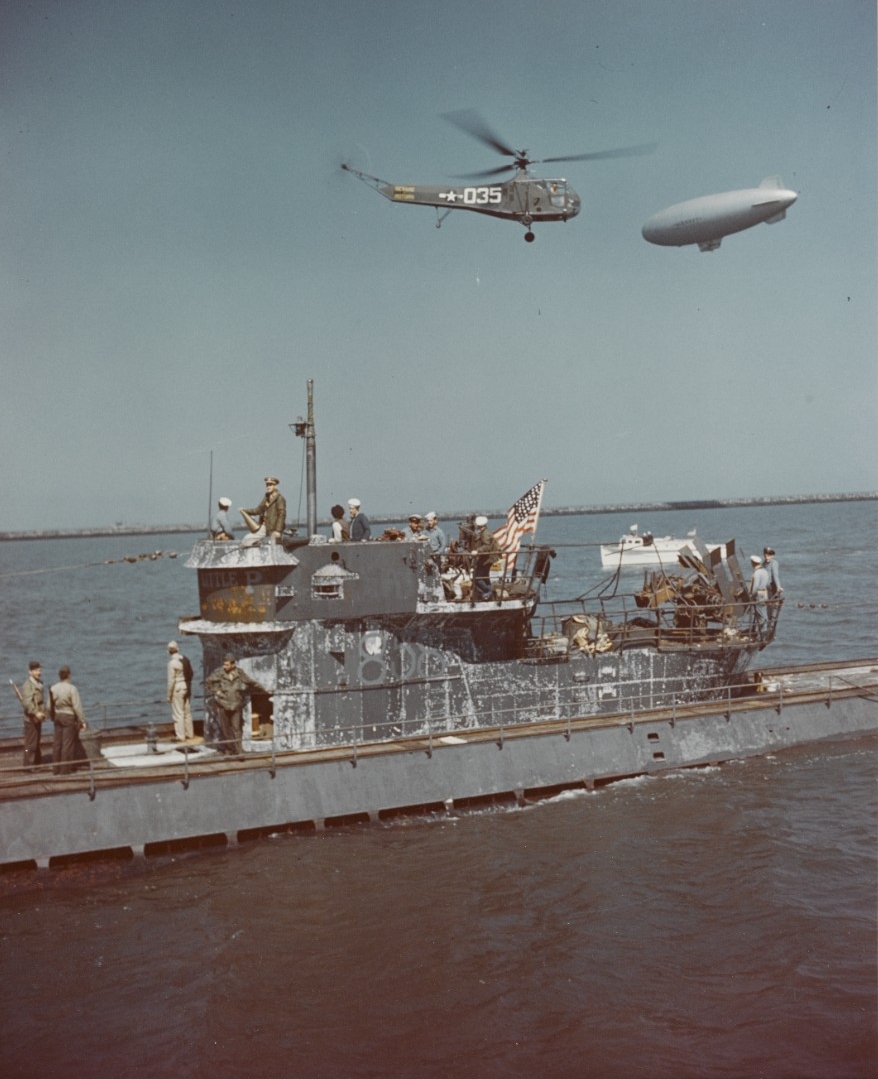 When Hitler committed suicide on 30 April 1945, his will named Doenitz the German head of state due to the fact that Doenitz was a hard-core Nazi and anti-Semite whose unrestricted submarine warfare operations met with Hitler’s favor. Doenitz had been commander of the German submarine force since 1935 and commander in chief of the German navy since early 1943. Much to his surprise, Doenitz was now the senior leader of Germany. With the Red Army already in Berlin, Doenitz knew the war was lost. He attempted to negotiate a surrender to the United States and Britain while trying to save as much of the German army from surrender to the Soviets and simultaneously continuing Operation Hannibal in the Baltic. This was the largest seaborne evacuation in history, involving hundreds of thousands of German soldiers and civilians trapped in East Prussia by the Soviet advance. (In the course of the operation, Soviet submarines sank three German armed transports with a combined death toll of over 20,000 people, mostly civilians, including over 5,000 children.) The Allies, however, remained true to their stated war aim of “unconditional” surrender and, on 8 May 1945, Doenitz and Germany did just that.

Several German U-boats surrendered at sea to U.S. Navy ships. U-805 and U-858 (survivors of Gruppe Seewolf) were taken to Portsmouth, New Hampshire, and Lewes, Delaware, respectively, while U-873, U-1228, and U-234 were all taken to Portsmouth. U-234 was a large cargo submarine en route Japan with a cargo of uranium oxide and advanced military equipment when she surrendered. All these submarines were studied and eventually scuttled. Only U-505, which was “captured” in June 1944 (and not “surrendered”) still exists as a museum ship in Chicago.

Two German U-boats chose to transit to Argentina rather than surrender. U-530 arrived in July and U-977 in August, leading to decades of conspiracy theories that the subs transported high-ranking German Nazis and/or treasure, none of which is true. Despite strong pro-German sentiment in Argentina, the Argentines turned both U-boats and their crews over to the United States, and both U-boats were eventually sunk as targets by U.S. submarines. Both U-boats were initially suspected in the sinking of the Brazilian cruiser Bahia in July 1945, actually caused by an accidental explosion that cost the lives of almost all the approximately 380 crewmen aboard, including four U.S. Navy Sailors.

As always, feel free to disseminate H-grams widely to tell the story of U.S. Navy valor and sacrifice. And, if there is any moral to this H-gram, it’s U.S. Navy veteran Yogi Berra’s observation that “It ain’t over ‘til it’s over.” Back issues of H-grams enhanced with photos can be found here.